After three years of fighting deportation, Ana Canenguez and four of her sons watch their American dream slip from view 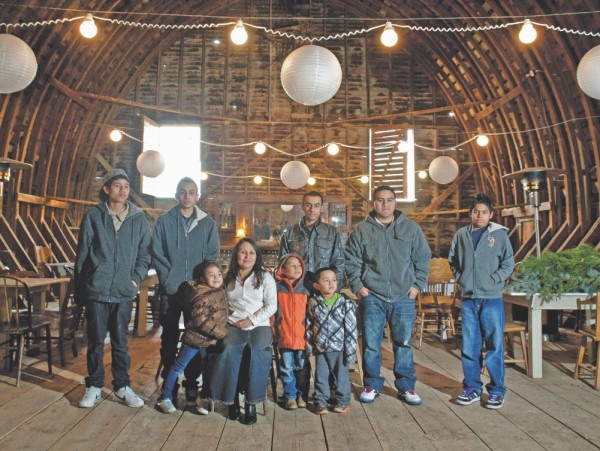 In January 2013, a City Weekly cover story called “Homeland Insecurity” featured Ana Canenguez and her battle to stop the U.S. government from deporting her and four of her sons to the violence-plagued streets of El Salvador, where gangs forcibly recruit teenagers to their ranks. After the story came out, Canenguez teamed up with the Salt Lake DreamTeam—a group of young Latino activists who advocate for immigrant rights—and organized vigils, an online petition and a trip to Washington, D.C. to seek support from sympathetic politicians, several of whom agreed to write to Immigration & Customs Enforcement on her behalf.

Sixteen months later, with 2 million people estimated to have been deported during President Barack Obama’s administration, Canenguez sits with her four boys, ages 13 to 19, eating hamburgers in a McDonald’s in Millcreek. Her Mexican-national partner, Eusebio Granda, sits across the room, watching their two children—Luis, age 8, and Katarina, 6, both U.S. citizens—climb through the plastic tunnels of the restaurant’s play area. On the surface, it’s an average scene, but it may be one of the Canenguez family’s final chances to enjoy such deceptively simple pleasures.

“In my country, only rich people eat at McDonald’s,” Canenguez says. “You can eat for a week on what that costs.”

It’s not only fast food that will be out of her reach after March 21, 2014, the deadline set down by Utah’s immigration court for Canenguez and her four boys to voluntarily deport from the United States. “If she fails to do so, the voluntary departure will automatically become a final order of removal, and a warrant of deportation will be issued,” ICE regional spokesman Andrew S. Munoz stated in an e-mail in response to an inquiry from City Weekly about Canenguez’s case.

But Canenguez doesn’t know how she can self-deport, since the plane tickets cost $4,000 for the five of them.

“Where am I going to get that money?” she asks in Spanish. “I clean rooms in a motel and have six children to feed.”

But whether self-deported or forcibly removed, the likelihood of Canenguez seeing her partner or her U.S. citizen children again, is decidedly remote, since, attorneys say, there is no type of visa she can apply for.
Nor are her prospects good in El Salvador. She’s about to lose a small property she has there to a bank, and her oldest son, Job, says their impoverished relatives are already struggling to pay their own utilities. “If we go back, we’ll live on the streets,” he says.

Job works as a carpenter and Geovanny, her second-oldest son facing deportation, works at a diner to help the family. Job graduated with a 3.6 grade-point average from Bear River High School in 2013 and, thanks to a scholarship, is in his second semester at Weber State.

After Canenguez learned in summer 2013 that the courts had denied the final appeal of two of her boys, she was told by an attorney that ICE agents “could come at any moment to arrest them.” Later, she collapsed and was eventually diagnosed with thrombocytopenia, a condition where her “chronically low [blood] platelet count,” according to a physician’s letter and her medical records, can lead to excessive bleeding, bruising and swelling. Canenguez worries about who will look after her children if, without easy access in El Salvador to the medication she needs to maintain her blood count, she were to sicken.

“We are living each day, but always with this dark part, this shadow we feel on our backs,” Canenguez says.
They have talked about going into hiding, rather than face deportation, but Canenguez ruled it out. “She doesn’t want to do it,” Geovanny says. “If we’re hiding, we’ll feel like criminals, which we’re not.”

Critics of illegal immigration include Utah political activist and retired foreign-services officer Ron Mortensen. While Canenguez has “a compelling story,” he says his experiences working in humanitarian relief for the U.S. government helped him form “a broader picture.” In El Salvador, “millions of people stay there, keeping their kids out of gangs; they’re not all coming to the United States.” He also expresses concern about those who’ve come to the United States without visas using stolen Social Security numbers to secure employment.

But for Canenguez, the key issue is the two faces of immigration politics in the United States. “They say its focus is deporting criminals, but they are deporting people who aren’t criminals and separating families.”

And Canenguez’s compelling story isn’t the exception to the rule.

“It’s not just Ana. Plenty of people still meet that criteria [of not being criminals] but are being deported,” says Itza Hernandez of the Salt Lake Dream Team. “We try to share their stories with as many people as possible. When people hear about something so ridiculous, usually it stops.”

Canenguez does have one blemish on her record. She was convicted in 2009 of assault and disorderly conduct in Tremonton Justice Court, where she had a translator but no attorney. According to a police report, a couple had followed her home from a school bus stop and argued with her on her porch. Canenguez later appealed the justice-court conviction in 1st District Court, where it was reduced to disorderly conduct, an infraction.

Gonzalo Palza, executive director of the federally funded Centro de la Familia, which focuses on developing educational resources for the Latino community, has known Canenguez for years. She was the parent representative of the 200 children enrolled at the center’s Box Elder outpost. Given all of Canenguez’s involvement in the Head Start program, including being elected as Parent of the Year by her peers and the Utah Head Start Association in 2012, he says, “it is very, very troubling to me that a neighbor squabble would determine her future.”

Beyond Palza and the DreamTeam, Canenguez has veteran immigration attorney Sharon Preston—whom she calls “an angel, a miracle”—on her side, representing her pro-bono.

In a March 2014 letter requesting prosecutorial discretion and a stay of deportation for Canenguez and the four boys, Preston wrote that Canenguez’s story was “a very unusual case, involving an extraordinary family.” She highlighted how “the family strongly meets many of the criteria for prosecutorial discretion addressed in the John Morton memorandum,” namely that the children were young when they came to the States, were excellent students and had no criminal history, and that three of the four were still minors.

While Canenguez does not symbolize the immigration debate, Preston writes in an e-mail, “she exemplifies it in some ways,” citing how she has been in the United States for more than 10 years. “Her family is really a model of American ideals. Hard work, integrity, gratitude.”

Hernandez says the Dreamers “are still planning to fight for Ana,” but declined to comment on what form that fight might take. Canenguez “has done nothing but try to provide for her children,” Hernandez says. “All her hard work will be in vain if she gets sent back to El Salvador.”

Canenguez is unrepentant. While she broke the law entering the United States without papers, “and has been treated like a criminal, I don’t regret it. And for all that this journey has taken, the struggle, the tears, the nights without sleep, if I had to do it again to save my children, I would.”