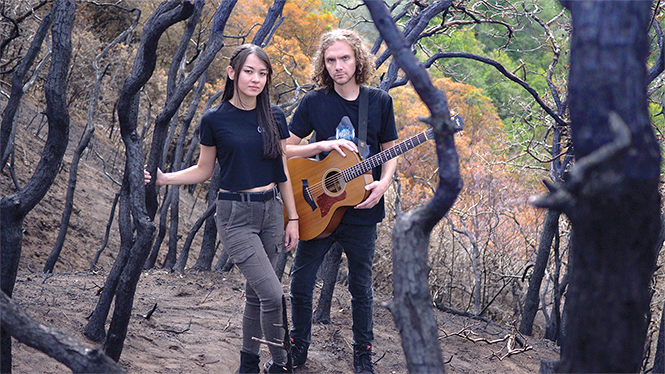 Music is important in many types of media, helping to set the mood and tone while taking you on a journey. Video games are no different; their soundscapes are there to lead you through all of the emotional highs and lows that the story takes you on. For SLC duo OrcaMind, their love of video-game music brought them together, and inspired them to create their own original compositions.

Starting out separately as YouTube creators, Michelle Heafy and Josiah Everhart bonded over their love of video-game music and began to collaborate. They didn't begin creating original work together right away, instead taking their favorite game tunes that didn't include lyrics and coming up with words they thought would fit with the track. "We write our own lyrics to [the songs], including ones from Zelda and Earthbound," Heafy said. "But we ran into this thing where you can't license covers that you wrote original lyrics to. You can't add those to Spotify or anything."

The duo has a passion for music, especially in video games, but they couldn't release their covers due to licensing issues. "A lot of times we were making the stuff sound so different from the original," Heafy said. Because the songs they were making lyrics for began to sound different from the originals, they figured it was time to create their own spellbinding melodies. "We were both afraid to do that, because all of our audience was watching us for video-game music, but we did it anyway," she said.

Things really began picking up for the two when they decided to stream on Twitch. In October 2021, they set up their equipment and jumped on—after a little hesitation. "We'd sit there with the go live button and we're like, 'Okay, we'll just practice for today,' and we did that for two weeks," Everhart said. "We bullied each other into just going live," Heafy added. "Because it's something we had both wanted to do for maybe five years, and we were both too scared to do it alone."

Because they had each other, they were able to put on a brave face and start performing for online fans. They began with their back catalog of video-game music, but it began to morph into something more. "He would do a riff on the guitar, and then I would sing a melody over it," Heafy said. "Then it just developed, and we started writing our own songs on Twitch because we're performing there every day." And thus, OrcaMind was born.

Their songwriting style is collaborative and plays off of one another. Heafy said she writes lyrics quickly, while Everhart continuously riffs over her singing. "I pretty much write the first thing that comes to mind," she said. "A lot of my melodies I wake up with in my head," she said. "We'll both dream up a melody, and then I record it on our phones. So our phones are filled with our voices tired singing melodies."

This dreamlike quality comes through on OrcaMind's tracks. Their self-titled EP takes listeners through a tracklist of ethereal and dreamlike songs. These qualities mixed with the video-game elements make their music an alluring and beautiful adventure. Pressing play, listeners will be greeted with the first track "Dead Moons," the last song that brought the EP together. It starts with nostalgic synth sounds, something you might hear from classic games of the '80s and '90s, before the song builds with drums and guitar. Heafy and Everhart's vocals complement each other in a way that's calming and intriguing, while the subject matter of the songs makes you feel as if you're embarking on a quest with the two as they serenade you about fantastical journeys.

Their songs make you feel like you're booting up your favorite old-school classic on a GameBoy, and thanks to the duo's love for video games from this era. They've generated a lot of lyrics to Legend of Zelda tracks, but one of the main catalysts for them to start creating their own music was what they were playing to the 1993 classic The Legend of Zelda: Link's Awakening. "We were like, 'We need to do something with this sound, but make it our own,'" Heafy said.

It was a huge year in 2022 for OrcaMind—from playing their first live show to releasing their first EP—and they're excited to do more in 2023. The main goal is to put out as much music as possible as the year goes on. While they love the video-game-inspired sound, they have many songs that fit into different genres. "We have so many songs that are a little grungy, and some that are a little poppy, so Josiah thought to have themed EPs," Heafy said. "The one we're working on now has more of an electronic sound, but so we're going to organize and to try to come up with cool concepts and visuals to go along with them."

OrcaMind are rerady to share more music and play live shows throughout the year. Follow the duo on Instagram @orcamind for updates, and stream their self-titled EP now everywhere. They also go live on Twitch often, @michelleheafy. Signed CDs of the EP are also available on OrcaMind's Bandcamp profile.