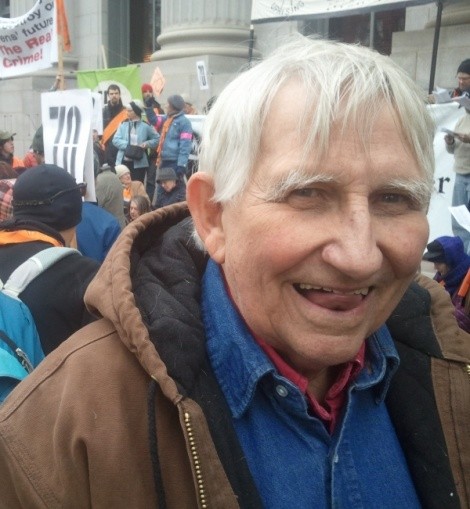 That’s the original monkey-wrencher code as laid out by deceased Utah conservation radical Edward Abbey, author of the novel The Monkey Wrench Gang, which memorializes Abbey’s friends who in the 1970s destroyed billboards and construction equipment in the name of Mother Earth. Tim DeChristopher—recently convicted of making false bids in an oil-and-gas lease auction—didn’t follow that code, but Ken Sleight, inspiration for Abbey’s character “Seldom Seen Smith,” says DeChristopher is refueling the explosive torch of Utah environmental radicalism that young people may not even know exists.

“[DeChristopher] is going to go down in the annals of Utah environmentalism as a most courageous person,” Sleight told City Weekly, while observing the Feb. 28 rally in support of DeChristopher. “As far as environmentalism, Tim is right up there on top. He’s always going to be, for years and years, the most influential to all of us, just like Abbey.”

On March 3, DeChristopher was convicted by a federal jury of posing as a legitimate bidder in a December 2008 Bureau of Land Management oil-and-gas-lease auction. He submitted winning bids on 14 parcels of land, amounting to 22,000 acres—some bordering Arches National Park—and rang up a bill of nearly $1.8 million, which he couldn’t pay. He did this, he says, to protect public lands and to bring attention to the auction that critics said was rushed illegally by the outgoing Bush administration. Once in office, the Obama administration canceled the sales at the auction, citing the parcels’ proximity to national parks and inadequate environmental reviews.

DeChristopher’s sentencing is scheduled for June 23. He faces up to 10 years in prison.

Sleight made a mostly anonymous visit to the rally in downtown Salt Lake City. Few knew who he was, and of those who did recognize him, few got a straight answer as to his identity, which has been Sleight’s style for years.

Sleight, 82, is a spry and talkative environmental elder who ran for the Legislature in the 1980s. Like his contemporaries, he fought against the construction of Lake Powell—which submerged ecosystems, drowned wildlife and ruined Indian artifacts in Glen Canyon. He was one of the litigants in the lawsuit that successfully protected Rainbow Bridge.

Ken Sanders, of Ken Sanders Rare Books in Salt Lake City, has known Sleight since the 1970s and knew Abbey as well. Sanders calls Sleight a “historic person” worthy of official distinction as a “living landmark.” Filmmakers from Sageland Media apparently agree. They’re currently filming a documentary of Sleight titled Seldom Seen and accompanied him to the DeChristopher rally.

Sleight now lives on Pack Creek Ranch in Moab with his wife; Abbey’s wife lives nearby.

He wasn’t raised to be a radical, but wilderness is in his blood.

“I was conceived on a horse,” he jokes. Born and raised in Paris, Idaho, his family moved to Utah’s Davis County, when he was 10 years old. His first move as an activist was a speech he gave in a Davis High School Future Farmers of America competition. He advocated for contour farming, a method of soil conservation, and was well received.

He grew up to operate a river-running boat company, guiding tourists through the rivers of southern Utah. That’s how he met Abbey, who had already written Desert Solitaire, his other most-famous book, but would soon engage in the adventures that formed the narrative of Monkey Wrench Gang.

Even today, Sleight is coy about whether he or a friend really drove a bulldozer over a cliff into Lake Powell, how many construction vehicles’ gas tanks he actually sugared and how many desert billboards he dislodged—all actions portrayed in Monkey Wrench Gang. “I don’t tell much about what I’ve done,” he says. “I’ve done a few things.” When asked what parts of the novel were pure fiction, however, he mentions only the chase scenes.

“Everything I did was legal,” Sleight says with a smirk, “[but] maybe not in the eyes of the BLM.” Like DeChristopher, Sleight believes nonviolent illegal behavior is justified if done to stop a greater ill.
He never went to jail. He was never even arrested. “I’ve been wrestled to the ground several times,” he says. Sanders says Sleight avoided arrest by following the monkey-wrencher code, but “Seldom Seen” himself has an additional explanation.

“I was running for the state House [of Representatives],” Sleight said, saying his high profile may have given him some added protection. “I just think they didn’t want the news.” That run for the Legislature took place in the late 1980s, well after The Monkey Wrench Gang was published in 1975 and during the final years of Abbey’s life, which ended in 1989.

Sleight has met personally with DeChristopher multiple times, and says DeChristopher should run for office. “I think he’s going to. I’m going to tell him ‘let’s get on it, the day you’re out of wherever you’re going to go, run for the state House or state Senate. Go to Washington.’”

On one level, Sleight has a lot to feel discouraged about. His precious Southwest desert is more developed and populated with oil and gas rigs than ever before. Lake Powell, which Sleight detests as a lifelong nemesis, is still smothering his beloved Glen Canyon. Sleight has hope, however, that he will live to see it emptied. “I’m expecting Abbey to help with a precision earthquake,” Sleight says, referring to a scene in Monkey Wrench Gang where the characters pray for a “precision earthquake” to destroy the Glen Canyon Dam. “I just wonder what the hell is holding him up. I guess he’s not in the right place to influence.”

For his part, DeChristopher appreciates the comparison but says he’s not really a monkey wrencher, per se. First, he didn’t try to get away—violating one of Abbey’s core monkey-wrencher tenets. Second, DeChristopher says the original monkey wrenchers damaged property. Since the December 2008 auction he disrupted was cancelled by the Obama administration due to the BLM’s poor performance—not his bogus bids—he feels that, in the end, he didn’t harm anyone or anything.

Regardless, Sleight says Utah’s environmentalists were adrift for many years without a central rallying cry, mission or hero. Watching the throngs of DeChristopher supporters singing joyously outside the Frank E. Moss Federal Court House, Sleight said Utah may be entering an activist renaissance.

“Certainly [DeChristopher being convicted] is going to build [the movement], and it’s about time we build. For awhile there, we were lackadaisical. After Abbey died, there was that period, I think, [where I asked] where is the spirit? I think Tim DeChristopher has increased our spirit,” Sleight says. “You don’t have to be an ‘eco-terrorist’ or anything like that, but you have to show up, you have to be adamant. … Lay down in front of the machine if you don’t like what they’re doing.”