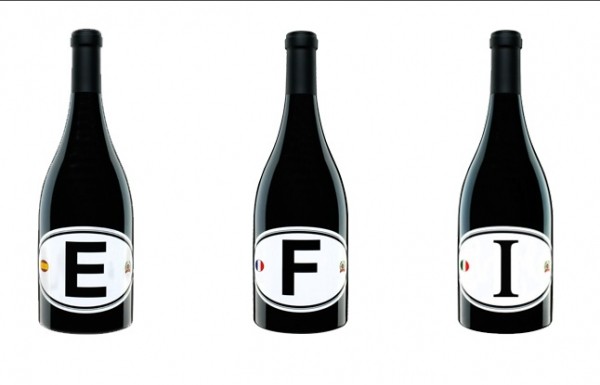 Orin Swift wines are some of my favorites. They are sexy, punch-you-in-the-face, no-holds-barred, high-alcohol wines that can’t be called subtle, but are sensational. I’m speaking of iconic Orin Swift wines such as The Prisoner ($38.99), Mercury Head ($75.15), Papillon ($66.99), Abstract ($29.95) and such. I’ve written about these wines before. But what’s currently got me excited are a trio of new wines from Orin Swift—wines that are simultaneously awesome and affordable.

The first thing to know about Orin Swift is that there is no Orin Swift. You’ll come off as a dummy if you say to someone: “That Orin Swift is a fantastic winemaker!” The winemaker/mad scientist behind Orin Swift is actually Dave Phinney, who merged his father’s middle name and his mother’s maiden name when creating Orin Swift Cellars.

The newest Orin Swift wine line is called Locations. There’s a Locations wine from Italy, one from France and another from Spain available here in Utah. Others, from California and Argentina, are also produced by Orin Swift, and there are more Locations locations in the works. According to a press release, the Locations concept came to Phinney while he was standing in a taxi line at Paris’ Charles de Gaulle airport and noticed the ubiquitous country code stickers on the back of cars there.

Well, Phinney is nothing if not a packaging/marketing genius, and the Locations bottles jump off the shelf at you. Each is adorned with a label consisting of a single letter, the country code for where the wine originated: I for Italy, E for Spain (España) and F for France. As with all Orin Swift wines, the bottles are made of hefty, heavy-gauge glass and seem more akin to weaponry than something you’d put wine in. I feel sorry for the guys who work in the Orin Swift warehouse.

The first of the Locations wines to be produced—and the best, in my opinion—is the one from France: F-1 ($17.99). In tandem with Richard Case, the general manager of D66 (another Orin Swift French wine), Phinney produced a red wine blend of Grenache from the Roussillon, Syrah from the RhÃ´ne and assorted Bordeaux varietals. By the way, the “1” in F-1 designates this as the first of the Locations wines to be produced in France. There will be others. The essential philosophy behind Locations was to make wines utilizing the best grape varieties from the great wine regions of France, Italy, etc. So, each country will ultimately probably be represented by many Locations wines. F-1 is fruity, with soft tannins, but packs enough punch to drink alongside steak frites.

Locations E-2 ($18.17) is a Spanish blend of Garnacha, Tempranillo, Monastrell and Cariñena, made in partnership with Phinney’s friend and colleague, Arthur O’Connor of Codorniu. Dark cherry, spice and floral notes dominate the nose. And on the palate, the wine is silky, with lively acidity, plum and mocha notes. I found this youthful, easy-drinking red to be a knockout with Marcella Hazan’s roasted lemon chicken.

Finally, from Italy, comes Locations I-1 ($17.99), which is made from Negroamaro, Nero d’Avola, Barbera and native varietals from Puglia. To make this wine, according to the press release, Phinney and his team “surveyed the countryside and identified specific appellations with celebrated varietals. Beginning in the south near the townships of Torricella and Manduria in Puglia, we finished up north at Alba in Piemonte.” It’s a slam-dunk with pasta and red sauce.

I suggest getting your hands on all three of these Locations and treating yourself to a tasty wine tour of Europe.