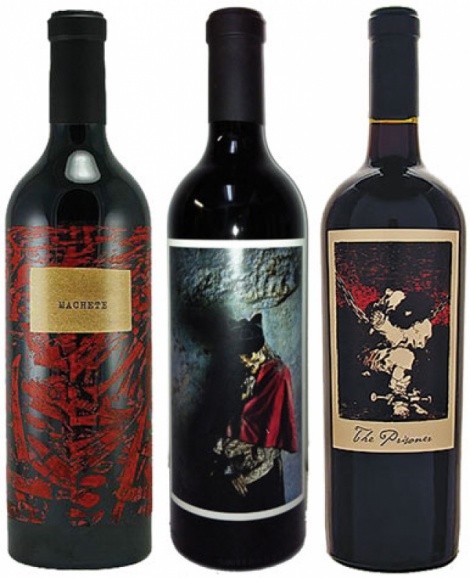 Voluptuous. Sexy. Explosive. Those are the type of words often used by writers to describe Orin Swift wines. And indeed, when drinking and thinking about Orin Swift wines, sex does tend to, uh, penetrate the psyche. A friend of mine describes them as “big tit” wines: They are in-your-face, nothing-hidden, completely out-front blends: no smoke and mirrors. These are high-alcohol, punch-you-in-the-face reds (plus one new sauvignon blanc) that are neither secretive nor subtle. That being said, who doesn’t like sex?

First, though: There is no Orin Swift. “Orin Swift Cellars,” says winemaker Dave Phinney, “is the realization of a dream that began while studying abroad at the University of Florence in Italy.” Hooked on Italian wine and seduced by the idea of winemaking, Phinney soon found himself back in the states working harvest at Robert Mondavi Winery and, eventually, founded Orin Swift with two tons of purchased zinfandel grapes. The name Orin Swift is the merging of Phinney’s father’s middle and mother’s maiden names.

The first thing you notice about Orin Swift wines is the packaging. The wines come in thick, heavy-gauge bottles that feel more like cannon artillery than something made of glass. I put an empty bottle of Orin Swift Papillon on my kitchen scale and it weighed in at more than 2 1/2 pounds. And then there’s the art. A bottle of Orin Swift wine is art—both inside and out. The Papillon bottle features a stunning photograph of winemaker Vince Tofanelli’s hands, with the name Papillon inked onto his fingers.

Papillon 2007 ($55) is a Bordeaux-style blend of cabernet sauvignon, merlot, petit verdot, malbec and cabernet franc, aged in 33 percent French new oak. Like all of the Orin Swift wines I’ve tasted, the subtle oak blends in seamlessly with the fruit and ripe tannins. And, like most Phinney wines, this one checks in at around 15 percent alcohol. It’s high, but doesn’t taste hot, thanks to its lush, soft mid-palate fruitiness (mostly blackberries, cassis and black cherries) and soft tannins. Make no mistake: This is a big wine, but it floats like a butterfly and stings like a bee, packing a wallop while being remarkably easy to love at the same time. That’s the common denominator I’ve found in Dave Phinney’s Orin Swift wines: They seduce, but don’t abandon.

The Prisoner ($36) is a highly sought-after wine, and we’re lucky to have it here in Utah. Wine Spectator awarded The Prisoner 2003 92 points and the 2005 vintage was number 17 on the magazine’s venerable Wine Spectator “Top 100 Wines of 2007” list. The 2009 vintage is the third Prisoner release, and Phinney has this blend completely dialed in; look for more awards. On the label is a reproduction of Goya’s “The Little Prisoner,” and inside is the work of a new modern master: Mr. Phinney. The Prisoner’s a kitchen-sink wine: 51 percent zinfandel, along with an array of blending grapes including petite sirah, malbec and charbono. “Massive” is the first impression. Think Pam Anderson.

If you have a little walking-around money, I highly recommend Mercury Head 2008 ($75), which is adorned by nothing more than a Liberty dime (which Phinney collected as a kid) on the bottle. This is a gorgeous, 15.5 percent alcohol cabernet sauvignon with bright acidity and luscious, ripe black-currant flavors. For less cash, but not necessarily less enjoyment, D66 2009 ($39) is a big, hefty, vin de pays des Cotes Catalanes—dark, rich, concentrated and spectacular, named for the vineyard designation “Dept. 66,” where the grapes came from in Mary, France. And Saldo 2008 ($29) is a huge, ripe, well-made, fruit-forward zin. Take one of these bad boys to bed with you.