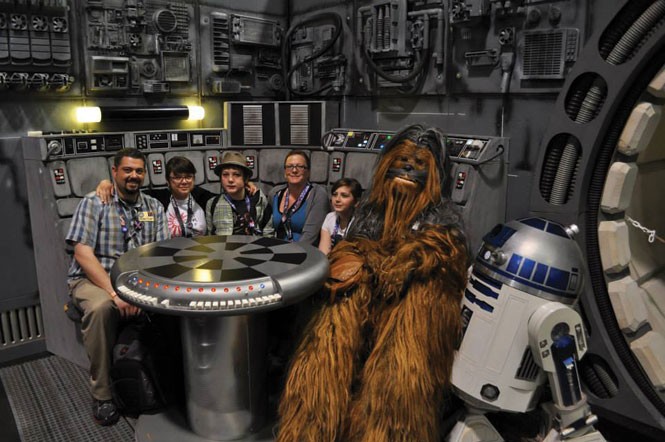 One could assume that once you've been to one fan convention, you've been to 'em all—but that wouldn't be true. Not by a long shot. Each convention I've ever been to has had a drastically different flavor.

Take, for example, Dragon Con. It's held annually in Atlanta, and is focused on family-friendly fan-organized programming during the day, then turns into a geeky Mardi Gras at night. Then, say, there's San Diego Comic-Con. It's like an overcrowded cattle car that hosts more comic-book-centric content than any other convention in the country, but it's still overshadowed by the big-name guests and movie-studio presentations. Salt Lake Comic Con is a brilliant mix of the two experiences.

All of those conventions bring together people who like a lot of different things and toss them into the blender. A central function of conventions is interacting with people who love the things you love. The downside? In these massive affairs, sometimes it's too easy to stand in line next to someone and have to converse in a completely different dialect of geek-speak. Or, worse yet, you could get stuck next to someone who hates the thing you love. Since you're spending so many hours every day in line, finding yourself next to someone who quite vocally despises the thing you're excited about is the fastest way to sour a convention experience.

Thankfully, that doesn't happen all the time. For the most part, whichever convention you go to, you're still going to meet great people. The offerings for panels are so diverse, they barely scratch the surface of each topic.

But if you go to an event dedicated to one thing, the experience is completely different.

Star Wars Celebration in Anaheim, Calif., took place April 16-19, and I was there, basking in all of its glory. I've never been to a convention as perfectly tailored to me as Star Wars Celebration. There were tens of thousands of people there, all of them assembled for one reason and one reason only: celebrating Star Wars. More than any other convention I've been to, it felt like a safe space. I could, at any point, turn to the person next to me and engage in a deep and meaningful conversation about the saga. I could sit in a darkened arena with 3,000 other people and not worry that they were going to laugh at me because the new teaser trailer for The Force Awakens made me cry. Like a baby.

And since the entire convention was dedicated to Star Wars, every facet of its fandom had its own little corner of focus. The panel discussions ranged from the behind-the-scenes work on the creatures at the cantina to collectors of TOPPS Star Wars trading cards. Nothing was off the table when drilling down into the world of Star Wars.

More than anything, there was a palpable feeling of joy at the convention that radiated off the crowd. And Star Wars isn't the only franchise to get this sort of treatment. Star Trek has its own cons. Disney does, too, as do Robotech, Firefly and more. The list goes on.

The great thing about living in Salt Lake City is that we get the best of all these worlds. We have the biggest and the best with Salt Lake Comic Con, but we can also find events that explore specific topics in depth. We can get our hands dirty with sci-fi prose at CONduit. Or maybe steampunk gets us going, and we can head out to the Salt City Steamfest. We have dozens of micro-conventions with a singular focus. We're spoiled here in Salt Lake City. And that's just the way I like it.