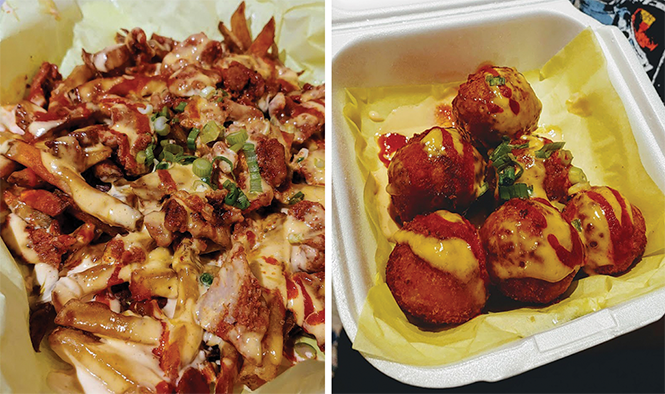 Over the past few years, we've seen a significant spike in the number of Korean restaurants opening up along the Wasatch Front. It's an exciting development—partly just because Korean food is fantastic, but also because it makes me grateful for the established Korean places that laid the groundwork for this significant bulgogi boom. Among the old guard is Bumblebee's (multiple locations, bumblebeesbbq.wixsite.com), which has been serving a delicious combination of American and Korean comfort food since 2014. It was here that I first learned how burgers, onion rings and nachos could be perfectly combined with kimchi, spicy mayo and bulgogi for a cuisine all its own.

When you take a moment to think about American and Korean cuisines, there are more similarities than differences. Bulgogi or any other form of Korean barbecue draws from the same foundation of marinated, slow-cooked meat that makes American barbecue culture tick. Barbecuing as a culinary practice is only a hop away from the grill, which is why barbecue and burgers have always gone well with one another. Korean barbecue is also known for slathering your taste buds in gochujang or similar smoky-sweet sauces that give proteins their trademark unctuousness. The practice of sauce creation and marinades alone is enough to bridge the culinary gap between American and Korean food.

This is precisely where Bumblebee's has set up shop. They make a pulled pork sandwich ($6.99) that can stand proudly against the offerings of any local barbecue joint; it's roasted to sweet perfection. They've also taken a crack at adding bulgogi or spicy pork to the formula for a traditional Philly cheesesteak sandwich—known as the K-Philly—complete with grilled onions, peppers and melted mozzarella cheese, hit with a bit of spicy mayo and sriracha. It's a fantastic mash-up of some of the world's finest sandwich flavors. The cabbage, carrot and sriracha heat give it a banh mi vibe, and the combo of grilled peppers, onions and melted cheese give it a true Philly feel.

Emboldened by their ability to whip up some American classics with Korean flavors, Bumblebee's has invented some truly memorable burgers. The x-factor to their burger-creation process is kimchi, the classic, spicy fermented cabbage that is a go-to condiment in Korean cuisine. The Mr. Kim ($6.99), for example, is a cheeseburger with lettuce, onion and tomato that gets hit with a fried egg, kimchi, spicy mayo and sriracha. It's a huge roster of toppings, but they're divided so evenly between Korean and American flavors that you get a near-perfect balance. If you're not a fan of heat, then this one isn't going to do you any favors, but those who don't mind a burger that bites back a bit will absolutely love it.

If you find yourself in the former group, a good way to experience the Korean/American fusion that Bumblebee's is known for is the katsu chicken sandwich ($6.99). It's your basic fried chicken sandwich, but the bird is prepared katsu-style—flattened and breaded with panko breadcrumbs for an extra crispy finish. Of course, you're not limited to these tasty sandwiches. Bumblebee's has a few colossal burgers like the Heart Stopper ($6.99) with bacon, bleu cheese and onion rings, or the Twisted Ranch ($6.99) which adds pepper jack cheese and barbecue sauce.

I will always love the Korean variations on burgers and cheesesteak sandwiches, but I think Bumblebee's creativity truly shines with their side dishes. The K-Pop Fries ($8.99) are a meal in and of themselves, pure heaven for anyone who gets all misty over a basket of loaded fries in any capacity. A bed of golden fries is topped with your choice of protein—bulgogi, spicy pork, spicy chicken or all three of you can't decide—and doused in sriracha and spicy mayo. Fries harmonize well with the other flavors, and diving into a giant plate of these with a fork is a true pleasure.

The kimchi rice balls ($3.50) are another ingenious invention that makes good use of the deep fryer. They start with a starchy, spicy combo of rice and kimchi that get battered and fried before they're hit with the MVP combo of spicy mayo and sriracha. The result takes its cues from state fairs and Korean street food, and it's so damn good that it should be illegal—crispy on the outside, chewy and a little crunchy on the inside while all those different spicy notes tickle your tongue. At under four bucks a pop, it's also way too easy to purchase three or four orders and completely debauch oneself on these bits of fried excellence.

Though both Korean and American purists can get something traditional for each cuisine, Bumblebee's ability to merge the comfort foods of both countries makes it worth a visit. The way kimchi ramps up a burger's natural flavors, and the way mozzarella cheese melts with bulgogi in just the right way, are beautiful things—and we have Bumblebee's to thank for building that bridge for us.