Why the trade show may leave Utah

The prospect of a new hotel took another tentative step forward in June when the Salt Lake County Council voted 6-3 to set aside $25,000 to hire a consultant to survey local municipalities and evaluate funding models.

Critics of the project, like Republican Councilman David Wilde, who voted against the study, want to keep Salt Lake City out of an “arms race” to attract more convention business. Wilde mentions via e-mail that previous expansions of the Salt Palace didn’t deliver on promises of additional conventions or spending, and that the main beneficiary—the Outdoor Retailer show—is threatening to leave anyway. “If [the hotel] is such a great project,” he asks, “why won’t the private sector build it?”

Mathis says four private companies have registered interest in developing the project, and that government funding would be applied to public infrastructure like street lights, sidewalks and meeting-room space.

Nielsen’s Haroutunian is doubtful the hotel will materialize. “The city has made it clear to us that there’s just no appetite or ability for them to justify another expansion of the Salt Palace and to build the necessary hotels that would go around it,” he says. “The analogy I’ve heard is that we can’t build a church just for Easter Sunday. There’s no demand for the rest of the year for anything like that.”

This Is the Place
Even if cramped exhibit spaces and limited hotel rooms diminish Salt Lake City’s chances to keep Outdoor Retailer, there is one factor that favors it. And for some, it’s the most important trait of all: Salt Lake City is a real “outdoors” town. Fans of the city point out that this appeal goes beyond its proximity to the mountains—which no other city of comparable size can match—to include the passions of its businesses and residents.

“The city feels like it has a culture of people who appreciate the outdoors,” Orr says. “I know individuals who live in Salt Lake who are really into getting the most out of camping, skiing, hiking and cycling, which is why, outside of the logistical challenges, I think it’s such a great home for the show.” Orr would like the show to stay in Utah or move to Denver, which she says registers a comparable outdoors vibe. She says larger venue cities like Anaheim or Las Vegas don’t support the true spirit of Outdoor Retailer.

“A huge draw for me to attend OR is to come and get some climbing days in and get some skiing days in during the winter show,” Haroutunian says. “I think the part of the business equation that happens outside of the hall—at night, in the restaurant, in a night club, on a chair lift or when you’re tied into a rope together—is not to be underestimated. That power is the secret to the success of OR.”

Enter Politics
In a June 24 Denver Post article, Richard Scharf, Scott Beck’s counterpart at Visit Denver, noted that if Denver lands the OR show, it would not only attract tens of thousands of delegates to his city, but might also encourage outdoor-product companies to locate in Denver, just as they have in Utah. According to the Economic Development Corporation of Utah, more than 1,000 sports and outdoor-product companies are based in the state. Many of these firms arrived during the 16 years OR has called Salt Lake City home. The state’s business team prominently mentions the show’s presence in its brochures.

One of the few Utah outdoors companies that predates OR is Black Diamond, whose CEO, Peter Metcalf, arrived in Salt Lake City in 1991 with a handful of employees. Today, Black Diamond is a $145 million, publicly traded company that employs 320 people in Utah and more internationally. Over the past two decades, Metcalf has been an active proponent of improving outdoor recreation and land protections in Utah, and he played a key role in luring Outdoor Retailer to Salt Lake in 1996.

In recent years, Metcalf and other vocal members of the Outdoor Industry Association (OIA), the trade group that is title sponsor of the show, have leveraged the economic impact of their industry in Utah to pressure local politicians on issues like wilderness protection and public-lands conservation.

“We are in an industry that is driven from the head and heart,” Herrera says. “And we know that [politics] is something our board and members care about.”

Although the majority of OIA’s lobbying occurs at a national level, Herrera says they pay attention to Utah because of OR. OIA has pressured the state’s leaders for many years, most recently sending letters to Gov. Gary Herbert criticizing the state’s conservation and land-management policies.

Those policies came to the forefront again in March, when Utah legislators passed a law demanding that the federal government turn over 22 million acres of Bureau of Land Management BLM and U.S. Forest Service land to the state to keep, lease or sell, and set aside $3 million to sue if they don’t comply. Most recently, the state announced its decision to sue the feds (again) under an 1866 mining law to take control of 19,000 unused roads, some of which cut across designated wilderness, prehistoric sites and national parks.Herrera says they pay attention to Utah because of OR. OIA has pressured the state’s leaders for many years, most recently sending letters to Gov. Gary Herbert criticizing the state’s conservation and land-management policies. According to Michael Hodgson, an OIA ombudsman, it’s logical to think Utah’s hostile stance toward public-land protection and recreation access could generate a backlash among the OR exhibitors. “Any business wants to support institutions that are in line with [preservation of wild lands]—it is important to them as a culture,” he says. “The sole thing Salt Lake City really has going for it right now is the perception of embracing outdoor recreation. If that changes, the culture suddenly becomes less of an influence to stay.”

If conflict between the outdoor industry and Utah’s political leaders sounds familiar, it is. Back in May 2003, Metcalf and OIA president Frank Hugelmeyer publicly threatened to pull the show out of Salt Lake City unless then-Gov. Mike Leavitt did more to protect wilderness lands in the state. Earlier that year, Leavitt had removed safeguards from 6 million acres of potential wilderness in Utah, angering the outdoor community and inspiring Metcalf to fire off an op-ed in The Salt Lake Tribune, saying, “Leavitt’s deals are jeopardizing the health of backcountry recreation destinations and outdoor businesses in Utah.”

During the 2003 OR summer market, a compromise-ready Leavitt met with OIA board members and even toured the show floor (after which he was said to be overwhelmed by its size and impact), as both sides reached an agreement to protect more Utah wilderness and keep OR in Salt Lake City through 2005. Just a year later, the show signed a contract to stay in Salt Lake City through 2009 in return for a 145,000-square-foot expansion of the Salt Palace. 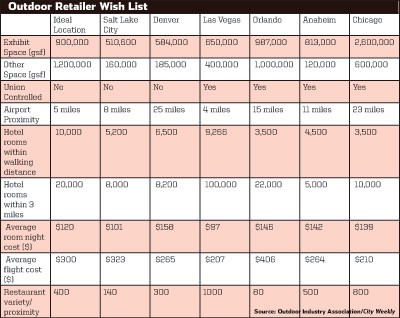 Political Indifference
In a March 2012 op-ed piece in the Trib titled “Herbert’s Unholy Alliance Hurts Economy,” Black Diamond’s Peter Metcalf decried the Legislature’s move in the 2012 session to reclaim lands from the federal government, saying the governor and state lawmakers were “killing the goose that lays the golden egg.”

Metcalf notes the difference this time around is the lack of a two-way conversation between the OIA and Utah’s political leaders that resolved the crisis in 2003. “We had the most responsive relationship with Gov. Leavitt and a solid, constructive relationship with Jon Huntsman,” says Metcalf. “But our relationship with the current governor and elected officials has never been worse.” He accuses Utah’s current leaders of failing to honor the commitments reached with the previous administrations. “The fact is that this state is associated with some of the worst policies regarding federal land in the country,” Metcalf says.

Herbert believes that the development Utah’s natural resources like oil, gas and coal is vital for the state’s economy and is not mutually exclusive with protecting the environment. “Gov. Herbert has repeatedly stated that opportunities for outdoor recreation are important to Utah’s economy and quality of life, and are a key consideration in every public-lands policy discussion,” says Ally Isom, the governor’s deputy chief of staff. “The governor’s office of economic development is actively working with the outdoor industry, and the governor’s environmental adviser, Alan Matheson, is actively engaged in dialogue with the OR show to discuss and address their specific needs to ensure they remain in Utah as a valued partner.”

But more dialogue with the OR show isn’t enough for Metcalf, who, two weeks ago, resigned from the Utah Ski & Snowsports Industry working group. Metcalf called recent actions by Utah’s legislature and Herbert as “hostile to the interests of the outdoor industry” as well as “reactionary and contrary to the state’s long-term economic benefit.” It later was reported in the Trib that Herbert, angered by Metcalf’s op-ed, had asked him to resign from the working group if he “cannot work in a spirit of collaboration.”