Good things await at the edges of the city. 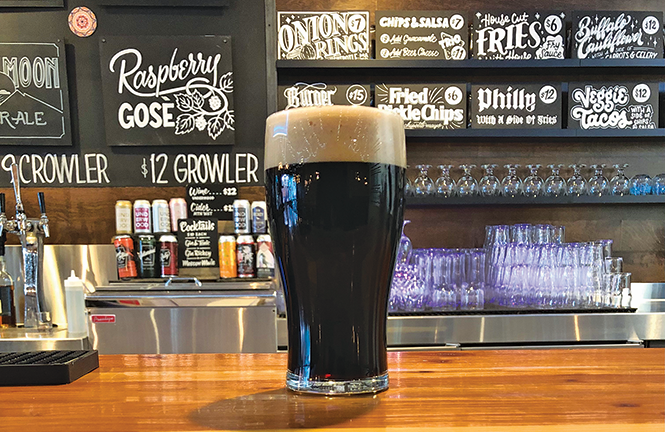 Salt Lake City has a solid core of breweries in its central district. That cluster of beer options can tend to outshine some of the city's peripheral breweries. This week, we look at two breweries on the edges of the city that may not immediately be on your "beerdar."

Hopkins - Coffee & Cream: Coffee & Cream Stout looks entirely black; this beer sheds not a single drop of color, regardless of the angle. The head that forms is pretty dark too, like white cake. Anyone who celebrates the holidays is familiar with that notorious box of chocolates, the one usually given by a distant relative or as an unimaginative hostess gift. This smells like that. It's a nice aroma, but not one that requires overthinking—coffee, milk chocolate shell and creamy truffle center are direct and on display.

The taste, however, is all coffee—well, coffee and cream. And I'm not talking instant coffee and skim milk; I mean heavy medium-roast and full-fat cream. As rich as that profile sounds, however, the beer is surprisingly light-bodied. Lactose imparts vanilla in the aftertaste, but otherwise, there's little else. Flavors are well-focused, but not put under a microscope. Put another way, it has character, but not complexity, which makes it a stout equally suited to a social evening with friends or a quiet night in. It's also worthy of serving with dessert, though it's more easy-drinking than typical stout.

Overall: Accurate though they are, descriptions of truffles, coffee and cream make this offering sound like a bit more of a treat than it actually is. But while lacking in some of the nuanced, denser qualities we've come to expect from stouts, nonetheless this 5 percent stout is a really pleasant offering that I'd enjoy again.

Toasted Barrel - Double IPA: It poured a slightly hazy burnt orange color that took on more of an amber red tinge when held to the light, with a little over two fingers worth of tan head that died down to a thin ring. The aroma starts off with a slightly higher amount of medium sweetness, with the hops being the first to show up; they impart a mixture of citrus rind, light tropical fruit and floral hops aromas, with the citrus rind hops seeming to stick out the most. Up next there's a little bit of yeast that leads into the malts, which impart a sweet malt, caramel malt and some slightly doughy aromas.

The taste seems to be similar to the aroma, and it starts off with a slightly higher amount of medium sweetness. The hops are still the first to show up, and they impart the same nice hop mixture that they did in the aroma, with the citrus rind hops still sticking out the most. That's followed by a slight alcohol flavor that goes right into the malts, with the sweet and caramel malts seeming to stick out the most with just a little bit of doughy flavor showing up in the background. On the finish, there's a medium amount of bitterness that doesn't linger too long, with a citrus rind hop aftertaste.

Overall: I thought this was a good example of the style, even though the bitterness was on the lower side; the hops showed up nicely, with some good fruity flavors and aromas. This beer had nice drinkability—smooth and a little crisp, with the alcohol well-hidden.

Toasted Barrel's Double IPA can be enjoyed in house or to go at home, and you'll find the Coffee & Cream on draft at Hopkins in Sugar House. As always, cheers!