Pablo's Fun Bus: Provo's Pablo Blaqk has big plans for his CD release and beyond. 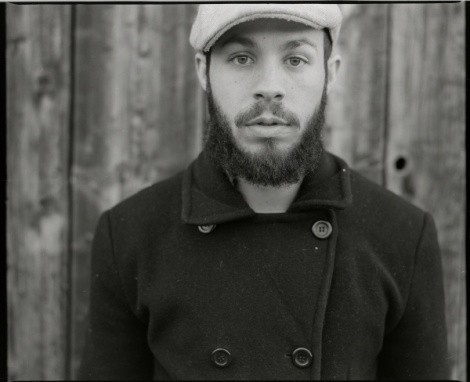 If Utah County musician Pablo Blaqk could be anything else in life, he would be a bus driver.


“The bus is fun, dude. There are so many interesting people on the bus,” he tells me when we meet up at a tiny coffee shop in downtown Provo on a lazy Sunday afternoon. “I would play paintball on my bus. I would just surprise people with quiz games: ‘Located under your seat are a couple of suckers.’ I would just give people free stuff, play bingo, play roulette.”

Blaqk is a painter, an event organizer, a DJ and a singer-songwriter. His long-anticipated debut album, Sons & Daughters, which he co-produced with fellow musician and friend Joshua James, is being celebrated with a massive party April 14 at Brewvies in Salt Lake City. It’s a party that sounds right in line with his fun-bus party plan, including several friends doing acoustic sets, food, drinks, a raffle, an accompanying art show and even a screening of Pulp Fiction.

”I started singing in the shower, and then I picked up a guitar when I was 17 or 18,” he says. “My dad wouldn’t let me buy a shotgun.” Having saved up $200 to buy that shotgun, Blaqk decided to get a guitar instead.

“I was just really bored. I had nothing to do. I had no outlet. I had art and all these other things, but I was always looking for new things to try out. I played tennis. I played football and basketball in high school, but I was never that kid,” he says.

And, in a way, music saved him.

“Music changed my life,” Blaqk continues. “I didn’t have any direction in my life, but when I started playing music, I felt like I was doing something right with my life, like I was going somewhere. And I wasn’t hurting anybody.”

Blaqk is extremely laidback, goes with the flow and doesn’t take life too seriously. “Dude, I don’t do a damn thing, literally,” he says, describing a typical day at home in Orem, where he lives with his parents, whom he refers to as his roommates.

When it’s time to get onstage and perform, however, Blaqk is all business. And he doesn’t limit himself to one genre of music; instead, he wants to see a progression in his music and hopes to collaborate with artists of different genres. One of his recent collaborations was with The Vibrant Sound, a reggae-inspired, hip-hop rock group also from Provo, on a song called “Industrial Revolution.”

At almost any Vibrant Sound show, frontman McKay Stevens will call Blaqk to the stage to sing with the band.

“Pablo and I met years ago at an open mic, and we both really dug the songs that each of us played,” Stevens says. “We talked a bit and kept seeing each other on the music scene. He liked the band a lot, and I told him that he should write some stuff with some of the [Vibrant Sound] songs I could never sing.”

The combination of Blaqk’s lyrics and the Vibrant Sound’s music proved a winning one, and Stevens said he plans on working with Blaqk on more songs.

“We continue to collaborate on new songs, as our styles work really well together,” Stevens says. “He is a creative individual with a great voice and good energy so I’m sure we’ll do a bunch more together in the future.”

The future is something Blaqk said he thinks about often. In five years, he hopes to have released several albums, own a record company and be married and living comfortably. But why rush the future? Blaqk is all about living in the moment and enjoying each day as it comes.

“I try to create something every day. I think that’s important that people do that in their lives—create something new in the world that hasn’t been done before,” Blaqk says. “I’m just trying to make myself a better person, trying to be more aware of what’s going on around me.

“I just like organizing events and bringing people together. I love that thought, that we can bring people together with music who otherwise wouldn’t hang out with each other. Knowing that I can actually help somebody get through something and feel like they’re not the only person in the world is a nice feeling, because I’ve felt like that many times.”