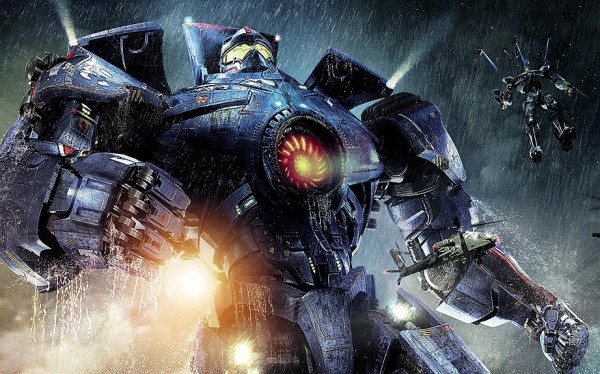 Long ago, in a mysterious California suburb, a young boy watched an independent Los Angeles television station whose programming seemed to consist entirely of Lakers games and monster movies. So, the boy grew up absorbing the big names like Godzilla and Gamera, but also War of the Gargantuas and Johnny Sokko & His Flying Robot—movies in which 50-foot-tall things trying to destroy humanity were opposed by 50-foot-tall things trying to save it. It was for this boy—and all the boys like him, now grown-up or maybe not-so-much grown-up—that Guillermo Del Toro made Pacific Rim.

Because Pacific Rim is as purely nostalgic a concept as any of the modern tentpole cinema franchises built around recognizable pop-culture characters. Del Toro transfers the Toho and Toei era—of guys in rubber suits punching it out through miniature cityscapes—to the CGI era, positing a world in which giant monsters called kaiju have begun emerging, one at a time, into our world through a dimensional rift beneath the Pacific Ocean.

Efficiently skimming through much of the backstory, he brings us to the year 2020—seven years into the invasion—where giant robots called “jaegers,” piloted by pairs of humans, have become our defenders. And, really, who needs to know anything else because giant robots fighting against giant monsters oh boy oh boy oh boy om nom nom nom drooool.

It’s tempting to mock geeked-out reactions to a concept like Pacific Rim, ignoring the Proustian appeal of recalling those things that delighted us in our youth. Indeed, when Del Toro kicks the story into major-league battle mode, it’s almost ridiculously satisfying. A three-armed robot turns its hands into whirling buzzsaws to take on an acid-spewing beast. A jaeger picks up a freighter along the waterfront to play a little tee-ball with the skull of a relentless kaiju. It’s epic. It’s goofy. It’s kind of irresistible.

But Del Toro (Pan’s Labyrinth, The Devil’s Backbone) is too inveterate a world-builder to make a movie that involves nothing but rock-’em sock-’em robots vs. beasts from 20,000 fathoms. He needs to introduce us to a haunted hero, Raleigh Becket (Charlie Hunnam), who was once a jaeger pilot but was traumatized when his co-pilot brother was killed in action, making him a risky bet when the story picks up again in 2025. We get a look at a multinational operation—British jaeger-project commander Pentecost (Idris Elba); Raleigh’s possible new partner Mako Mori (Rinko Kikuchi)—as the world comes together to fight a common foe. There are even occasional glimpses of the world that has evolved after 12 years of monster wars, including a Hong Kong slum built on the skeleton of a defeated kaiju, and a gleaner culture led by Hannibal Chau (Del Toro’s erstwhile Hellboy, Ron Perlman) making a living off selling scraps of dead beasts. It’s a richer, more comprehensive universe than you might expect.

Also, it often doesn’t work. Hunnam, to put it simply, turns in one of the most staggeringly inept lead performances in blockbuster history, screwing up his face to indicate whatever it is we humans would call “emotion.” Del Toro gets a fair amount of mileage out of a pair of eccentric scientists (Charlie Day and Burn Gorman) trying to understand the kaiju, yet nearly all of the other human interaction strewn throughout this thing is thin and perfunctory. It feels as though Del Toro is torn between wanting to offer something besides the crunching set pieces, and knowing the bulk of his time and resources have to go there. The result feels like an attempt to copy Independence Day as much as old-school Godzilla—and that’s not meant as a compliment.

So, we find a spectacle balanced on the edge of a rift—between the appeal of its battles royale and the wish that there were more of them, between the admirable attempt to inject some quirky texture and the painfully tedious stuff involving the human characters. In bits and pieces and chunks, Pacific Rim reminded that monster-movie-loving boy what it felt like to grin stupidly at a skyscraping donnybrook. And in other, larger chunks, it reminded the boy—now a boy no longer—that some tastes eventually grow up.