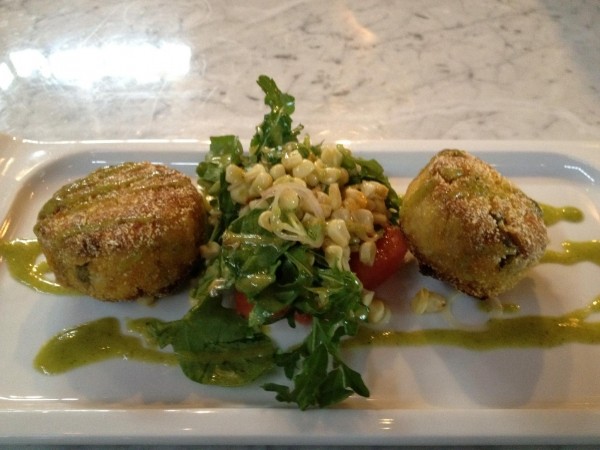 First things first: Pallet—one of Salt Lake City’s busiest new restaurants—is not a misspelling of palate or palette. It’s a reference to the loading dock of Salt Lake’s first creamery, which was located where Pallet now thrives. So, “pallet,” as in the wooden pallets you find on loading docks.

Walk into the restaurant and you might think you’re in Portland. Or Greenwich Village. Or Brussels. It feels unlike any other Salt Lake City restaurant I can think of. Reclaimed wood floors and tables along with soft, golden-hued lighting give the eatery— a restored brick building—a natural, timeless look and feel that is instantly inviting. Cody Derrick of CityHome Collective is largely responsible for the unique design, and there are oil paintings—including one of Porter Rockwell—by Courtney Derrick, wife of Cody’s brother, Pallet co-owner Rocky Derrick. His owner-partner is Drew Estman. Since Pallet is somewhat a family affair, the vibe is warm, friendly and—even at lunchtime—feels like an escape from urban Salt Lake, although it’s smack dab in the middle of it.

So why don’t I like Pallet more than I do? Well, it’s complicated. The food, for example, can be convoluted, with no discernible rationale other than innovation for innovation sake. But there are other complications, having to do simply with the way we eat here. For some reason, I love communal dining tables in France, Belgium, Germany, Italy and the like. But, mostly, I hate them here. I’m not really sure why, except that maybe Europeans have better manners, speak more softly and are more respectful of their fellow diners than Americans are. At any rate, when it gets busy at Pallet, it feels to me like too many chairs are shoved into the communal tables—diners literally eat elbow to elbow—and you might find yourself feeling like you’re dining in a noisy Tokyo subway at rush hour.

It’s interesting to watch Pallet morph during the course of an evening. Early, you’ll find guys in suits from nearby offices catching an early dinner, alongside some elderly folks. The vibe is mellow. But as the evening progresses, the crowd of customers becomes younger and hipper, the music gets louder and it becomes difficult to have a conversation with the person across from you. Pallet is all hard surfaces, so there’s nothing to soak up any noise. If you like that kind of bustling scene, make reservations for a late dinner when the restaurant is in full-blown hipster-heaven mode.

Ultimately, though, it’s the food that matters. At Pallet, I’ve enjoyed excellent dishes, and also encountered some that made me wonder if anyone in the kitchen is actually tasting the food. For example, an appetizer of homemade gnocchi with sage, Parmesan and sweet hints of Amaretto ($11) was excellent, the delicious gnocchi nicely browned and crisp on the outside, fluffy inside. We tried that winning dish literally right next to a loser called “salty, sweet, spicy ahi tuna” ($12). The idea here, a server explained, is to taste the tuna in three preparations: salty, sweet and spicy. Unfortunately, only one worked. He suggested we begin with salty: ahi tuna on a chickpea mash with truffle slivers. It was gawd-awful. First, the tuna was inferior—not A+ sushi grade—cubes of raw ahi with a bit of gray on some of the edges. A dried-out pile of mashed garbanzos with pieces of black truffle didn’t help matters. The “sweet” preparation—tuna chunks atop a simple slice of grilled blood orange—was very good. But then, a spicy sauce—I was told it was tomatoes and serrano peppers, but tasted to me pretty much like straight Sriracha—so completely overwhelmed the third ahi preparation that I couldn’t even taste it. Interesting concept, but an overall fail on the palate.

A bone-in chicken breast ($20) was beautiful, but accompanied by barely cooked, too-crunchy green beans and carrots, along with a side of potatoes with yummy melted Brie on top, and nothing but bland spuds underneath. There must be a way to incorporate the Brie into the entire serving of potatoes. Pepper-crusted New York steak ($26) was excellent, and perfectly cooked, but came with soggy, wilted spinach and a side dish of that would have been great had it been properly executed: “blue-cheese macaroni.” It was reminiscent of arancini—breaded and deep-fried cheese & rice balls—except macaroni was used rather than rice. The balls were nice and crisp and crunchy on the outside; unfortunately, the cheese wasn’t melted completely inside, resulting in uncooked chunks of blue cheese. Again: Where’s the quality control?

I credit Pallet for serving generous portions of truffle fries ($9) that incorporate actual truffles, not truffle oil. And I quite liked a lunchtime “Cuban” sandwich ($12) even though authenticity was not its strong suit; it consisted of a small dollop of citrus-marinated shredded pork, along with ham, Swiss cheese, pickles and mustard on crisp, panini-style bread. But why in the world would anyone put coleslaw on their Cuban— especially on the bottom of the sandwich where it soaks through the bread, making a fork and knife necessary to eat it? Another lunchtime dish—blackened salmon on a bed of spinach with pomegranate seeds and pomegranate dressing ($11)—was refreshingly simple and appealing.

An eclectic, well-constructed drink list featuring interesting wines, house cocktails, beers and more make imbibing at Pallet an enjoyable enterprise. Indeed, there’s a lot to like about the restaurant right now, especially its unique atmosphere. But I feel like the cuisine is still a work in progress, with too many missteps. Hopefully, that aspect of Pallet will improve over time.