Are we really using less paper? 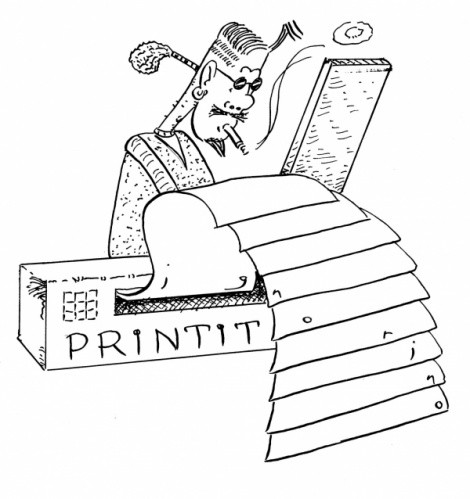 As of 2011, are we, as a nation, using significantly less paper than, say, 20 years ago? The obvious answer, to me, is yes, but then I think of all the reams of paper around offices and I wonder: Are we really using less paper and therefore saving the forests? —Thom Riley

All I can say is, be prepared for a shock.

First the back story. Perhaps the best-known prediction of the paperless office came in a 1975 Business Week article titled “The Office of the Future.” Reading it today, you’re struck by the mix of freakily accurate prediction and laughable naivete. At a time when personal computers and the Internet were still embryonic, experts foresaw PCs on every desktop that could talk to each other by network. At the same time, they lamented that a major obstacle to paperlessness would be the boss’s attachment to dictating letters to a stenographer. As it happened, the steno pool was an early casualty of the digital age.

Predictions of a massive shift from paper documents to electronic ones were likewise wildly off, at least in the early going. Global consumption of paper doubled between 1980 and 2000. Partly that was because of general economic expansion, but strictly on a per-worker basis, U.S. consumption of paper increased 50 percent between 1990 and 2000, inspiring books such as 2001’s The Myth of the Paperless Office.

Theorists struggled to explain why this was so. In 2006 sociologist Richard York suggested two possibilities. The first was the Jevons paradox, initially proposed by 19th-century British economist William Jevons: as use of a resource becomes more efficient, in effect it becomes cheaper, which leads to greater use. Better fuel economy doesn’t reduce gasoline consumption; instead it encourages people to drive more, and overall gas use goes up.

As York recognized, however, the Jevons paradox didn’t fully explain why the paperless office had failed to materialize. Digital technology didn’t make paper cheaper; rather, it offered a cheaper alternative, namely electronic data storage. So why didn’t one drive out the other? York proposed the paradox of the paperless office: as the cost of memory technology drops, we create and store more digital documents. Meanwhile, easy access to printers encourages workers to make paper copies of all those documents, and total paper use increases.

Other theories abounded. One frequent target of techie scorn was retrograde executives and their lingering fondness for a medium they could fold up and make airplanes out of.

A more persuasive explanation, however, is that computers suck. Paper is cheap and adaptable, and, equally important, almost always works. If you’re an office drone scrambling to get a last-minute report out, one disaster you’re not living in fear of is the Blue Sheet of Death. Computers, in contrast, make politicians look reliable. And let’s not forget premature high-tech obsolescence. God help the poor sap who committed critical information to magnetic tape, a floppy disk, or a Bernoulli drive.

But here’s the surprise. Despite all the above, people eventually did begin using less paper. A lot less. The year 2000 was the peak for both office paper and newsprint consumption in the United States. Since then, the use of office paper has dropped 40 percent, newsprint 60 percent. Similar reductions are being seen in Europe. Some call it a paradigm shift.

Let’s not get giddy about this. The fact that today you can file your tax return electronically and read The New York Times on your iPad doesn’t mean we’ve saved the rain forest. People use wood for lots of things besides paper. Worldwide demand for wood products is still increasing, in large part due to the growing economies of Asia.

Still, it’s reasonably clear we’re not up against some implacable law of nature that will drive us to chop down trees till the whole planet looks like Easter Island. Fact is, as far as the forests are concerned, we’ve been here before. Wood use in the United States hit what would be a long-standing peak in 1906. After that it plunged by a sixth as coal replaced firewood. Overall U.S. wood consumption didn’t surpass its former high until the 1980s, by which time American forests, once thought doomed, had largely recovered.

Could the same thing happen on a global scale? It might, due to the same forces that are starting to make the population crisis seem manageable. In the industrialized world, people are reducing their paper use for the same reason they have smaller families: life is easier that way. Meanwhile, rising prosperity around the world means there’ll be less pressure to clear the forests for firewood or subsistence agriculture.

Sure, we’re still running out of oil, electric generating capacity, helium, copper, rice, fresh water, technetium, ocean-caught fish, chocolate, topsoil, bananas, tequila and phosphorus, among other things. But look on the bright side. Assuming acid rain, insects, shifts in land use, climate change, and disease don’t get them, we might, eventually, be OK on trees.