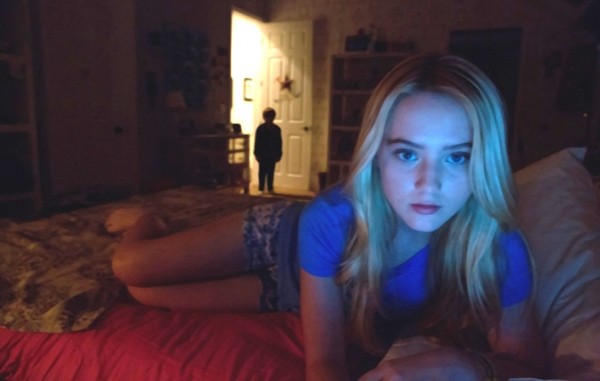 You’ve seen those TV ads for the Paranormal Activity movies in which night-visioned moviegoers jump and scream at the latest PA flick they were lucky enough to get an advanced showing of. I attended such a screening of Paranormal Activity 4; all the attendees were required to sign a release form allowing Paramount Pictures to use their likenesses in the marketing of the film, and before the movie started, the audience was reminded again—nudge nudge—that they just might end up in a commercial for the film. The implication was very clear: Act super scared and be over-the-top dramatic, and you could be on TV!


Even given that push, even with that sorta-promise of 1.5 seconds of kinda-fame, it was impossible for this audience to fake terrorization. The rampant dullness of Paranormal Activity 4 is shocking, I will grant it that much. Considering that, as was the case in the earlier films, it’s mostly about watching people sleep, it’s strangely fitting that PA4 might best be used as a soothing nightlight. It’s that monotonous.


Almost plotless, pretty pointless and entirely un-scary, Paranormal Activity 4 may be one of the most unnecessary sequels ever, certainly of the variety that gets a big-budget global release instead of shamefully shuffling off directly to DVD, or maybe to a “world premiere” on basic cable. The basic found-footage conceit of accidentally capturing a malevolent poltergeist on home-video equipment was more than played out by the just-tolerable-in-its-novelty first Paranormal Activity; it decayed into forgettable instant irrelevance—even more so than other mainstream movies these days—with its first sequel. Now, with the fourth film in the most redundant franchise ever—already a pretty low bar—it’s as if the filmmakers themselves have given up, shrugged a Whatever the Hell and simply tossed some random not-even-found-footage-anymore at us in the hopes that we won’t realize it’s not scary.


It’s like this: Screenwriters Christopher Landon and Chad Feehan offer no pretense that—even under its own loose rules—the ongoing story of poor, original Paranormal hauntee Katie (Katie Featherston) makes any sense whatsoever. At the end of PA2, set in 2006, we saw Katie kill her sister and brother-in-law and kidnap their infant son, her nephew Hunter; now, in 2011, it appears that Katie and current grade-schooler Hunter have moved in across the street from teen Alice (Kathryn Newton) in Nevada, because fugitives from double murders can easily rent upscale suburban homes. But whatev; it’s the supernatural stuff that makes no sense, for Alice’s home is now being beset by weird noises and strange dangerous stuff happening, because …


Well, I won’t spoil it, even though the big surprise is something that in an even marginally smarter film would have been a given from the outset, because that’s where the even-marginally-interesting story might be. (Avoiding it raises howlers of questions that would demand answering, if I could be bothered to care.) And also because it wouldn’t matter if any of the haunting stuff were in the teensiest bit unnerving.

Directors Henry Joost and Ariel Schulman, returning from PA3, have “crafted” a movie that could be called the Where’s Waldo of spooky crap, insisting that we search the background for something, anything to be happening—Is a ghost gonna jump outta there? Is a shadow gonna pass over here?—since there is little of concern happening in the foreground. Mostly, it’s Alice Skyping with her not-quite-boyfriend, Alex (Matt Shively), who sets up all the many laptops in Alice’s absurdly rambling McMansion to record all the odd knocks and doors slamming. And mostly, there is no Waldo to be found. Sometimes, Joost and Schulman cheat unforgivably, as by inserting a jump cut where one would not be found in, you know, found footage, just so there will be something, anything, startling and jarring onscreen.


This isn’t merely lazy storytelling: It’s nonexistent storytelling. And PA4 is doubling down on its own lack of internal logic by offering itself up in IMAX. Because if there’s one thing that says “real stuff that happened to real people,” it’s teens Skyping in IMAX.