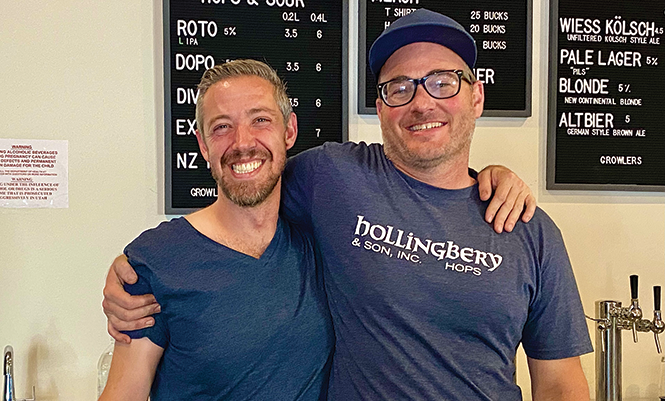 Park City is hallowed ground when it comes to beer; it's where Utah's modern craft beer movement began in 1986, when Greg Schirf founded Wasatch Beers. Many breweries and brewpubs have opened up since then, including Park City Brewing Company, Shades of Pale Brewing Company (now Shades Brewing) and Park City Brewery (which is reorganizing in SLC). All have subsequently left Utah's premier resort town for one reason or another, with many more in the planning stages finding it to be a challenging endeavor as well.

It's not difficult to open a brewery in Park City, as the city itself is very receptive to breweries, distilleries and wineries. Instead, affordable real estate seems to be the wrench in the gears that many would-be brewers face. Luckily, all the stars aligned recently, and Park City saw its first brewery open within the town's borders since Shades of Pale debuted in 2010: Offset Bier Company.

Patrick Borque is no stranger to Utah's beer scene. He has been a beer bedouin in northern Utah, hanging his hat in breweries like Epic, Saltfire, Uinta and, most recently, Ogden River Brewing. Bourque always had a way to express his creativity, but never on his own terms. Now, with the launch Offset Bier Company he and partner Connor Brown have finally found a permanent home and a place to focus their vision.

"Actually, we have no grand vision," Brown corrects me. "No big goals or big aspirations. We want to make fresh modern beer for Park City."

The two partners seem to be in complete agreement in that regard. "We love all kinds of beer", Borque adds, "but beer that tastes like beer is something we really would like to focus on."

Variety and rotation are also on the menu, as Offset Bier will be operating with one of the smaller brew houses in the state. "We only make 3-1/2 barrels at a time, around 105 gallons-ish," Borque says. "We also have four 7-barrel fermenters, and a farm of smaller fermenters that allow us to experiment and have some fun."

With small batches comes quick turnover, and beer nerds love variety in brewery pubs. "Our small-batch philosophy grants us a lot of flexibility, and the ability to do some really cool things," Brown explains.

I quickly figured that out as I slowly made my way through Offset's initial offerings. There were a lot of standard ales that I found to be clean and well-constructed, but I really felt drawn to the Wiesse Kolsch. I asked Borque what happens when I find an Offset beer that really speaks to my inner curmudgeon? "We will try to have a few beers on tap that will (hopefully) be available on a regular basis," he says.

As the chief beer nerd around here, I'm hoping the Wiesse Kolsch is one of those that finds a following at Offset Bier. The lighter cereal grain, along with a touch of honey flavor that builds on that great fruity Kolsch yeast, is just sublime. "Yes," Borque chuckles, "one of our house beers will likely be the Weisse Kolsch. It's super drinkable, and I think it's one of the best beer-flavored beers out there."

Offset Bier is set up as a tavern, so you will find everything (for now) at draft strength, with cans and growlers to-go soon. There is no kitchen; like most brewery owners, they'd rather be making beer than making fries. Keep an eye on @offsetbier on Instagram for details on their daily food options (if any). And if you happen to be in Park City, you can find Patrick and Connor making and slinging Offset Bier at 1755 Bonanza Dr., Unit C in Park City. As always, cheers.