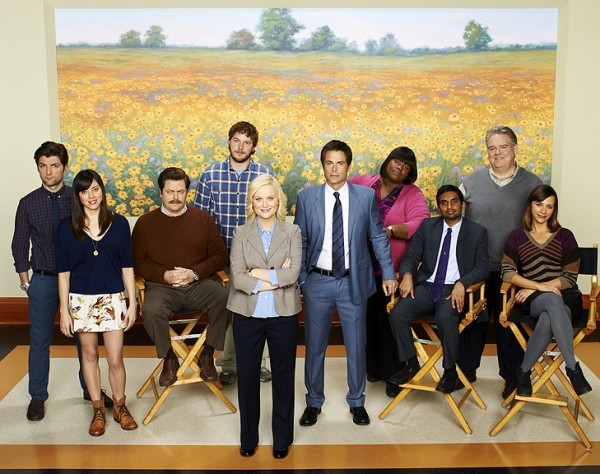 Season Finale: Yes, already—NBC has to get Parks & Recreation out of the way so the network can waste the rest of this month’s Thursdays saying goodbye to and eulogizing The Office, not to mention premiering/burning off Anne Heche’s doomed Save Me sitcom. At least Parks & Rec will most likely return next season; every other NBC comedy is dead or damned close to it. (Strangely enough, Community just might pull through—would you settle for five seasons and Kickstarter movie, Commies?) In tonight’s too-soon Parks & Recreation season finale, all other plot developments pale in comparison to this: FBI super-agent “Bert Macklin” is back!

Season Premiere: There are dark times ahead for boy “band” Big Time Rush in Season 4, according to Nickelodeon: “This season finds best friends Kendall, James, Carlos and Logan recording music for their third studio album and preparing for the launch of their next world tour,” says the PR, before turning grim. “The guys quickly discover that the music landscape has become more competitive and the pressure to stay relevant proves tougher than ever.” Which means the actual musicians, songwriters, engineers, choreographers, stylists and maybe even the Auto-Tune software that create BTR will be dealing with depression, alcohol, drugs and/or thoughts of suicide. The “music” business is a bitch.

The Show With Vinny
Thursday, May 2 (MTV)
Series Debut: Say what you will about the cast of Jersey Shore: At least none of them have died in a mud pit. In MTV’s ongoing quest to keep their former cash cows in your ADD-riddled consciousness, here’s the long-unexpected debut of Vinny’s (the nice guido with the buzzcut and lazy eye, remember?) talk show, which he hosts in his parents’ Staten Island home. Each week, guests ranging in status from Real Star (like Mark Wahlberg) to Vinny’s own Clinging for Dear Life to 14:59 (Redfoo, Ke$ha) drop by the house and hang with the painfully Italian Guadagnino family. The results are, surprisingly, not unwatchable—which is all you can ask of MTV anymore.

Maron
Friday, May 3 (IFC)
Series Debut: If you’re already a fan of Marc Maron’s stand-up and crazy-popular WTF podcast, Maron is for you. If you think he’s just a grating old man spouting endless hang-ups and complaints, keep flipping. For the uninitiated, Maron is no less of a weird place than anywhere else to jump into his little world. Unlike IFC’s previous attempt to turn a podcast into a TV show, the mixed-bag funhouse of Comedy Bang! Bang!, Maron works because there are already proven models to work from—namely, Curb Your Enthusiasm and Louie. Maron splits time between exaggerated “real life” situations wherein “Marc” attempts to interact with society (which he nails with hilarious, obnoxious ease) and studio podcast interviews (some guests hold up their end of the funny better than others). Also, unlike in Curb, The Only TV Column That Matters™ believes some of these scenarios may have actually happened—like in the premiere episode, when Maron tracks a harassing Internet troll to a Dungeons & Dragons game in Irvine, only to be pwned again, in person. Totally could have gone down.

Splash
Tuesday, May 7 (ABC)
Season Finale: Of all the creepy factors in one of the most idiotic reality-competition shows ever—the human manatee that is Louie Anderson, the dead-eyed gaze of Greg Louganis, etc.—the cyborg presence of Splash co-host Joey Lawrence was the most unsettling of the lot. Time to put him back in his charger cell until the next season of Melissa & Joey. So … who were the diver finalists?