"Part of My American Dream" 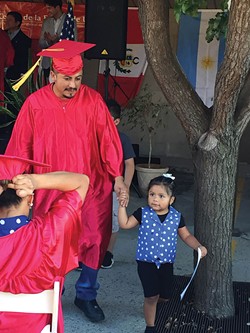 It was a moment Margarita Gonzáles says she never thought would come. On the warm and breezy evening of Sept. 10, she and 24 other Hispanic women and men were awarded diplomas issued by the Mexican Public Education Department for completing their primary school education.

"It's an experience I cannot describe," Gonzáles says, speaking through an interpreter. "Because this is an opportunity I didn't know about, there are people who don't know about these programs."

The program she is referring to is Plaza Comunitaria, a joint effort between Centro de la Familia de Utah and the Mexican Consulate in Salt Lake City. It was established to provide Spanish-speaking adults in the U.S. an opportunity to grow and further their education. Gonzalo Palza, CEO and director of Centro de la Familia, says it is one of the few programs that makes an effort to improve the lives of Hispanic adults. "Most of our money goes to serve very young children," he says. "Of all of the programs we have, this is the one that has the most impact for me. Because it takes an adult to recognize that he needs formal education, at whatever age. And that is transformation. Transformation for them, their families and the communities they live in."

Graduates beamed as they were greeted with hugs and handshakes by Javier Chagoya, Salt Lake City's Mexican Consul. He congratulated the students on surmounting the stigmas of going back to school as adults. "These kind of opportunities are difficult," Chagoya says. "Sometimes, you don't want to do it because you feel ashamed, you know? It's not easy."

Gonzáles agrees with the consul that presuppositions surrounding going back to school added to the challenge. "Sometimes people don't progress because there is a lot of stigma and shame and fear," she says, "fear of never believing in yourself that you can accomplish something." Gonzáles says she focused on her family and kept her children close in mind. "They are very happy and proud," she says. "Even though I work a lot, work and then study, I still made some time to get my degree."

The excitement of the children could be seen in their smirks and smiles as they fiddled with the tassels of their parents' ruby-red graduation caps. "The impact [of this program] is not just on the new graduates, but it has a tremendous impact on their families," Palza says. "The families, the young ones, they are being impacted, even though they do not know it yet."

He believes that, through their parents' example, the next generation of Spanish-speaking Americans can avoid falling into the achievement gap. According to the Pew Research Center, 41 percent of Hispanic adults over 20 do not have a high-school diploma, a significantly higher rate than other ethnic groups. "I can assure you that those children [of graduates] are not going to be a part of the achievement gap," Palza says.

The graduates expressed relief and pride as they reflected on their journey. Betty Moñeton says she never completed her education in her native Colombia and, after 15 years in the U.S., is happy to finally receive a degree. She currently operates a day care with her husband and says the degree will help her in her aspirations to study childhood education and psychology. "For me, this is part of my American Dream," she says. "I can progress."

Another graduate, Assienta Bartilotta, says she wanted to show her grandchildren "that there is always time." Bartilotta is originally from Italy but grew up in Argentina, where she received some high school education. Now, she says, she wants to learn English. "It's very hard for me," she says, speaking through a translator. "I'm old; I'm 68."

Victor Ortega, who is from Puebla, Mexico, says he wanted to be honored with a certification from his home country. His focus now, he says, is on mastering his third and fourth languages and moving forward with his career plans. "I plan to do international business later on in my life," he says, "hopefully like tourism or something like that, so I want to do business administration and linguistics."

Ortega says his greater goal is to provide for his struggling parents, siblings and extended family members back in Mexico. "They are not making enough money to even eat," he says. "If I'm not here helping them, they wouldn't survive out there."

When a family member brings home an impressive report card, Ortega rewards them with whatever cash he has on hand. "I pay them $20 or $30, whatever amount of money I have in my pocket," he says. "I give them the money so they can see that there is more than just people being happy about them studying, but actually seeing that they can get ahead."

Javier Campos, one of 80 instructors at the centro, says he is honored to assist eager pupils. "They are students and they become my family," he says as the festivities died down, adding he has witnessed students make significant sacrifices. One frequent challenge, he says, is time commitment. "Our students have two or three jobs sometimes, so it's really hard for them," he says. "Even if they want to do it, sometimes they just go home and they have to prioritize, you know?"

For many students, graduation isn't the journey's end. Gonzáles says she is happy to be done but is ready to continue her education. "This is not the end," she says, struggling to conceal a grin. "This is the beginning. ¡Si se puede!"