Plus: The Mindy Project, Vegas, Neighbors 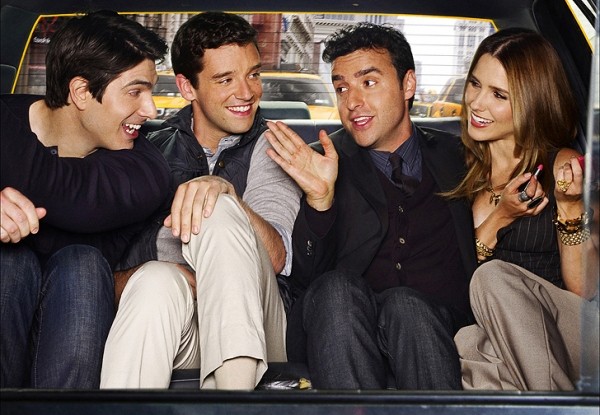 Series Debut: CBS practically screams that Partners creators David Kohan and Max Mutchnick co-produced Will & Grace in the ’90s, but conspicuously omits that they also had a shaky hand in 2010’s craptabulous $#*! My Dad Says. Partners brings the two worlds together: amped-up gay stereotypes and auto-drone “comedy,” fluffed with the same obnoxious canned laugh track that CBS dubs into all of its sitcoms (and probably The Talk). Lifelong friends Joe (Numb3rs’ David Krumholtz, playing it straight) and Louis (Ugly Betty’s Michael Urie, playing it G! A! Y!) find themselves in relationships (with One Tree Hill’s Sophia Bush and Superman franchise-killer Brandon Routh, respectively), and … nothing ensues. The New Normal isn’t the fall’s worst new “gay” show, this is.

The Mindy Project
Tuesday, Sept. 25 (Fox)
Series Debut: Like Ben & Kate, The Mindy Project seems genetically engineered to mesh with the show before it—in this case, that’s New Girl. Zooey Deschanel proved she could headline a comedy, then wisely stepped back into a tight ensemble; Mindy Kaling, after years of blending in at The Office, seems damned determined to put her Me, Me, Me! stamp on this sucker. She plays Mindy Lahiri, an OB/GYN who worships romantic comedies but can’t understand why her love life never turns out like one—although getting drunk at her ex-boyfriend’s wedding, giving him a smackdown “toast” and then getting arrested for driving a bike into a pool totally sounds like a Sandra Bullock movie. It’s impossible to predict how the hot-mess Mindy Project is going to progress, but there’s nothing else like it, or her, on TV—a good place to start.

Vegas
Tuesday, Sept. 25 (CBS)
Series Debut: Former Las Vegas sheriff Ralph Lamb (Dennis Quaid) just wants to be left alone on his ranch, but the city folks keep dragging him back in! The imaginatively titled Vegas is based on the real-life story of Sheriff Lamb and his 1960 battle against invading Chicago crime lord Vincent Savino (played by Michael Chiklis) to keep burgeoning Las Vegas clean—guess how that turned out? Besides Quaid and Chiklis, the heavy-hitter cast also includes Carrie-Anne Moss, Jason O’Mara and Taylor Handley, but Vegas just comes off like CSI without the tech, or Mad Men with cowboy hats and craps tables. Will somebody please cast Chiklis in something that lives up to The Shield, already?

The Neighbors
Wednesday, Sept. 26 (ABC)
Series Debut: ABC has been on such a hot streak with smart comedies (Modern Family, Happy Endings, Suburgatory, Don’t Trust the B in Apt. 23) that it’s easy to forgive the air balls (Last Man Standing, the cancellation of Cougar Town, the national tragedy of Work It). But The Neighbors is a whole new breed of lawn turd: The Weavers (previously employable comic actors Lenny Venito and Jami Gertz) move to the New Jersey suburbs and soon learn that everybody else in the ’hood are, here’s the “wacky” twist, aliens. Not so much a reverse 3rd Rock from the Sun as a military-grade torture device.


Thursday, Sept. 20
Up All Night, The Office, Parks & Recreation (NBC)