After years on the road, Marny Lion Proudfit brings her music home to Ogden. 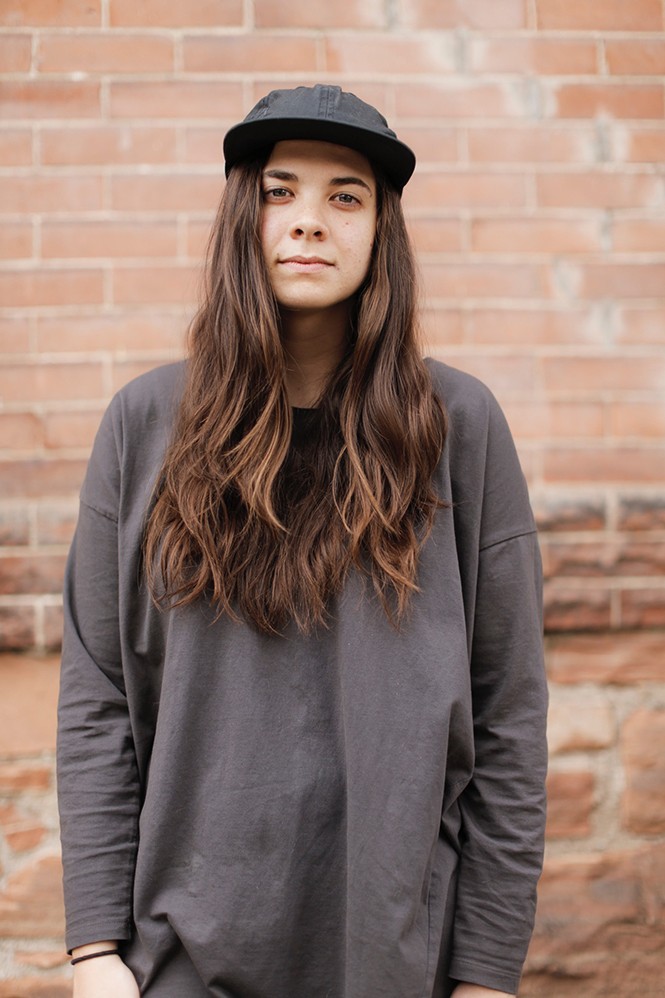 Marny Lion Proudfit'svoice can seemingly move mountains. But for several nomadic years, the 25-year-old Ogden native wasn't sure where to move herself. Accompanied by an acoustic Martin or hollowbody Gretsch, Proudfit packs years of emotion into her weary, penetrating lyrics: "My pride gets the best of everything." "My battle-scarred heart can't take another year." Even her newest song, "Desert Gym," features the line "I don't like my thoughts"—this from an off-the-cuff electronic duo that's supposed to be fun.

Proudfit comes by these gut-wrenching sentiments honestly. Raised in a religious yet music-loving Mormon household, she took piano lessons and sang in the church choir. As a self-described "angsty teenager," she wrote out lyrics by her favorite artists—Ben Folds, Regina Spektor, Ben Gibbard—to decipher the secret to song structure. After a friend in Guitar 101 showed her how to experiment with chords, Proudfit says she was off to the races. "I grew up learning music the structured way, and once I knew you could do whatever you wanted, a light bulb went off," she says. "The poems I was writing and the chords I was learning came together, and I was immediately obsessed."

Spending most of high school hanging with the "misfits" who frequented Mojo's, an all-ages venue in Ogden, Proudfit found a sense of belonging she had lost as she strayed from her upbringing. "I don't think I would be the musician that I am now without having that foundation in the church," she says. "But with that came all the turmoil: 'I don't know if I believe in this. If I don't, am I screwed? Is the rest of my family, too?' Hanging with the local crew at Mojo's opened my eyes to the fact that people could be really nice and deserving of good things without being in this hardcore religious mindset."

After graduation, Proudfit went to Utah State in Logan for a year before moving to northern Maine, where she worked as a summer camp's musical director. Then she landed in Boston, successfully applying to the prestigious Berklee College of Music—mostly to prove to herself that she could. Before long, she was a staple on the area's thriving singer-songwriter scene, busking in Harvard Square and even playing MIT frat parties.

Her music was received well, she says, but the saturation level worked against her. "It was hard for me to level up," she remembers. "I was playing bigger venues, but they'd say, 'OK, sell 25 tickets and you've got the gig.' You had to promote yourself, and that became more stressful than I could handle. I didn't have faith that people would show up just to listen to me. I wasn't picky enough—and I was afraid to ask for what I thought I was worth."

Her self-confidence was boosted when Proudfit and a group of friends raised more than $6,000 on Kickstarter and spent 10 days recording an album on a Pennsylvania farm. Proudfit calls it the most gratifying musical experience of her life, but the realities of crowdfunding, coupled with her ongoing identity crisis over leaving the LDS church and eventually coming out as gay, compounded her stress. "I expected things to just happen for me after that, even though I had no idea what I was supposed to do next," she says. "I was 20 years old, I had dropped out of Berklee, and I still didn't know how to put on my big kid pants. So I ran away to escape from it."

Proudfit spent the next few years traveling—Los Angeles; Northern California; New York City; Eden, Utah—before moving back to Salt Lake City. She didn't play music much at all in 2016, but in 2017, she helped an old New York friend, Adam Schatz of the eccentric rock band Landlady, set up a show at Salty Creative in Ogden. "I realized I had all these friends who agreed that DIY shows are better," she says. "The fans are willing to pay more since it's a cooler experience, and the musicians are happy because they know the money is going directly to them."

Now, Proudfit is back where she started. She and her girlfriend, who recently proposed on a trip to Yellowstone, are about to close on their new home in downtown Ogden. Proudfit manages a bakery in Salt Lake City. And she's performing at outside-the-box events up and down the I-15 corridor: Rye's new acoustic series, Black Feather Whiskey's Heartworn Fridays, Lighthouse Lounge in Ogden for Lavender Vinyl's first Record Store Day performance.

That show introduced the world to Proudfit's new project, Cop Kid. Mining unexplored electronic territory, good friend Boone Hogg's video game-inspired beats—one song samples a Game Boy play-through from Kirby's Dreamland—float below Proudfit's ethereal vocals. She says she relishes the opportunity to share the stage with a like-minded collaborator and have a little looser, less intense experience: "With Cop Kid, it's easier for me to be completely free. When I'm by myself, I'm much more vulnerable."

Yet she considers that vulnerability her ultimate calling card. "Playing my own music is the most fulfilling thing I've ever done," she says. "These songs took years to write, and I give everything of myself when I perform them. I don't want to compromise that.

"After all these years, I've realized I can build a career the way I want to. Yeah, it's going to take a lot longer, and I'll need to have more patience. But it's going to happen. I have a lot of faith that this approach will work for me."