Indie-pop outfit Passion Pit is all about the live show 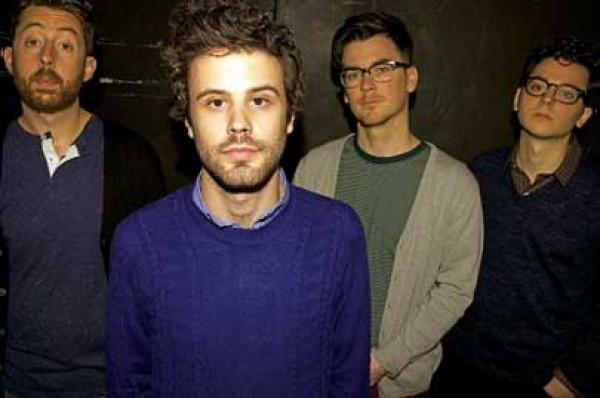 For Ian Hultquist—who plays keyboards and guitar for the indie-pop group Passion Pit—the road to a successful music career has been filled with interesting twists and turns, even as far back as junior high.

“I’ve been [playing music] since fifth grade, when I joined jazz band,” Hultquist says with a laugh. “I started playing the alto saxophone, and that was my first real experience with playing music. But then in seventh grade, I picked up a guitar, and that kind of destroyed everything because I completely forgot how to read music.”

As time went by, Hultquist continued playing music his own way, and after seeing Michael Angelakos—Passion Pit’s lead singer and songwriter—perform a solo show in 2006, he approached Angelakos about working together. Fast forward seven years, and the band has gone from being favorites at Boston’s Emerson College and winning local music polls to having their music featured in films and video games and playing prominent festivals worldwide and major TV shows, like their recent performance on the Late Show With David Letterman. The effect of such exposure is invigorating for Hultquist and the band, especially the longer they tour.

“We’ve been touring on and off for over a year, so we’re definitely tired, but I think something like what we did on Letterman really rejuvenates you,” Hultquist says. “It refocuses everything and brings a new perspective to the music.”

After the critical success but relatively low commercial impact of early releases like the 2008 EP Chunk of Change and their 2009 debut full-length, Manners, Passion Pit’s most recent album, 2012’s Gossamer, has been a bit of a curveball for the band. They have received praise from hip, indie supporters like Pitchfork, but they have also experienced unexpected mainstream success, with two of their singles—“Take a Walk” and “Carried Away”—reaching the Top 10 of multiple singles charts. But while the surreal success of these tracks has brought the band new fans, Hultquist says the live shows are still what they focus on first.

“Up until a few months ago, those songs were still going pretty strong at radio, but it’s definitely slowed down,” Hultquist says. “For me, that’s nice because I love focusing on the live shows. That’s our main way of getting our music out to people, is for them to come to the shows and for them to see a performance and hopefully dig it.”

Like Hultquist’s journey into the music world, Gossamer is full of the unexpected. For starters, Passion Pit often juxtaposes upbeat songs with serious lyrics; they also hop genres with ease, which keeps everyone on their toes. For example, “I’ll Be Alright” relies heavily on synths to drive the song, while “Constant Conversations” plays out like an R&B-flavored slow jam. “Carried Away” is electro pop at its shiniest and brightest, and the band’s first single, “Take a Walk,” is a catchy, echoing piece of indie rock. In addition to Gossamer’s musical variety, the video for “Take a Walk” also represents the band’s willingness to play with expectations.

“The director came to us with the idea to film the entire video from a helicopter cam,” Hultquist says. “That was it. There wasn’t a giant backstory to it and there’s not a huge story being told in the video. It was more of like, ‘Let’s try this cool idea and see how it goes!’ ”

Hultquist has an easygoing way about him when he speaks, but there is no mistaking that he is too driven and committed to music and his bandmates to give anything less than his best.

“I want to put all of myself into it,” Hultquist says. “I could play a note-perfect show, but I could have not been playing with anyone else on the stage. The most important thing is everyone is playing together as a band, playing really well and listening to what’s going on.”