Two documentaries explore the worlds of people with unique obsessions.

THE BOOKSELLERS
Documentary
Available via SLFSatHome.org

Though the world of documentary film can often seem dominated by advocacy pieces—politically-charged calls to arms over one of the many, many things that are wrong in the world—some of the most compelling non-fiction stories work on a simpler level. They're stories of people and their obsessions, drawing their impact from the way that people discover and pursue the peculiar passions that give meaning to their lives. Love is infectious, and watching people love things—sometimes irrationally, sometimes with unexpected consequences—generally makes for a solid viewing experience.

Director D.W. Young's The Booksellers takes a broad-ranging look at the world of bibilophilia, introducing short profiles of a wide range of collectors, dealers and archivists. While it begins with a focus on the antiquarian book trade and the unique folks who make it their lives and livelihoods, the film ultimately ranges into a variety of related subject areas, from those who build private collections, the history of used book stores in New York, and younger enthusiasts who specialize in documenting, for example, the history of early hip-hop music journalism.

Because Young is attempting to cover so much ground, The Booksellers inevitably sacrifices some detail in terms of building its subjects into fully-realized characters. Instead, it becomes more interesting in its details, from the vagaries of the marketplace that can determine the value of a given book, to the way these subjects think of their pursuit as different from art collecting; "Books are not trophies," one dealer observes. Yet the common thread is a strain of melancholy over people feeling like they're seeing the end of the era of physical books. At a moment when the digital world is showing both its advantages and its limitations, it's easier to understand the appeal of wanting to connect with something real in your hands. 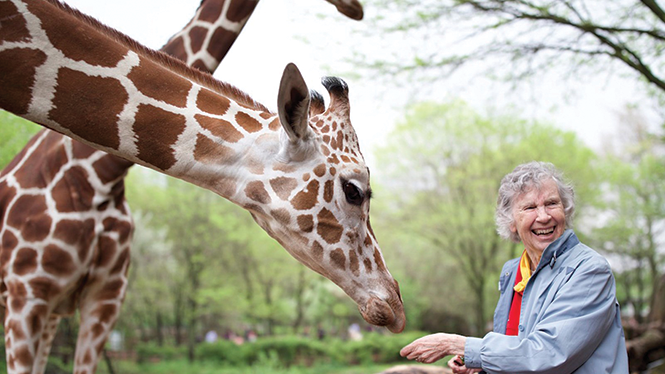 THE WOMAN WHO LOVES GIRAFFES
Documentary
Available via ParkCityFilm.org/tickets

The Booksellers also touches on the male-dominated nature of its subject area, a theme that becomes even more significant in The Woman Who Loves Giraffes. As the present-tense verb of the title would indicate, it's a profile of a still-living person: Dr. Anne Innis Dagg, a Canadian biologist who, in 1956, became not just the first woman to study giraffes in the wild, but the first naturalist of any kind to visit Africa to study animals in the wild. Tracking her fascination with the animals from a visit to the zoo as a child, the film covers Dagg's early life and research—often through her letters, as narrated by Tatiana Maslany—through her frustrating attempts to break into male-dominated science academia and her eventual return to Africa after 60 years.

Director Alison Reid's story would be worthwhile if it did nothing more than introduce a groundbreaking scientist who has remained mostly anonymous despite preceding more high-profile colleagues like Dian Fossey and Jane Goodall; it's a clever choice by Reid to begin the film with footage from an episode of the vintage game show To Tell the Truth, in which none of the celebrity panelists was able to correctly identify the real Dr. Anne Dagg from a trio including two pretenders. But the film does become a sharp character study of a driven woman in a time when such a thing was looked at as an anomaly, one who told the man who would become her husband that he'd have to wait for her to travel to Africa by herself for a year if he wanted to marry her. Dagg herself is a lively presence in the present-day interviews, still feisty and still struck with emotion at remembering being denied tenure decades earlier. While her landmark book on giraffes is described by contemporary zookeepers as "the bible" of the animal, it's hard not to connect with the frustration of how much of her potential work never came to be after she was effectively driven out of academia.

What shines through in both documentaries, however, is the way a genuine love of something enriches the lives of passionate people, beyond fame and fortune. Whatever obstacles these people encountered, it's hard not to be envious of those who know exactly what they're meant to be doing with their lives.