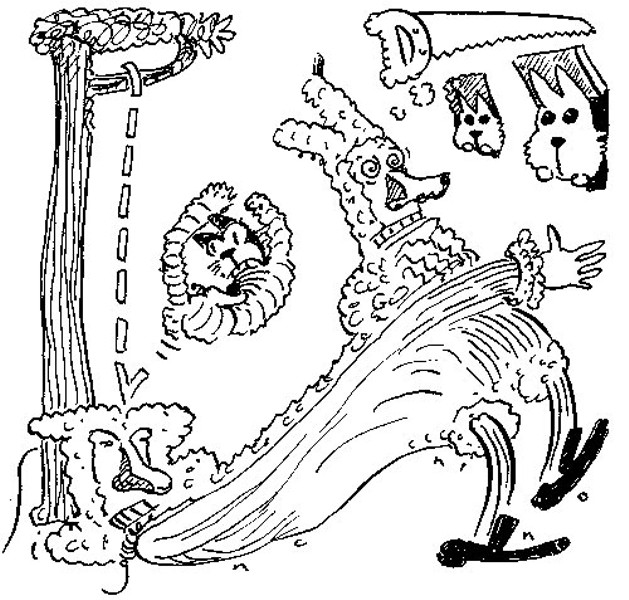 I was just watching Animal Planet and they said in one of their Fun Facts that Isaac Newton invented the cat door. Can this possibly be true? Reminds me of another story I came across: that old-school pinup Hedy Lamarr invented a torpedo guidance system. Hedy Lamarr?

Isaac Newton inventing the cat door is the stupidest thing I have ever heard. Well, that's not true. At the Straight Dope, where we've got people asking us if they can get high sniffing Sharpies, the competition for stupidest thing is pretty fierce. However, this one is definitely up there.

The Newton cat-flap idea has been kicking around for (seriously) more than 200 years. Here's the whole story, as best I can disentangle it:

1. Isaac Newton (1642-1727) did much of his pioneering work in mathematics and optics at Trinity College, Cambridge. There's no evidence he had a dog or cat.

2. After Newton's death, his story became encrusted with the usual legends. According to a 2011 history of Trinity, "Newton mythology has it that he invented the cat flap in order to allow his cat to leave his rooms without disturbing the light while he conducted experiments into optics. The earliest known version of this is ... an essay of 1802 which [in defense of the Irish cites] examples of English incompetence ... asserting that Newton cut two holes in his door for the cat and its kitten, not realizing that the kitten would follow the cat."

3. In an 1827 memoir of his years as a Trinity scholar a century after Newton, mathematician John M.F. Wright relates the above yarn, adding this embellishment: "Whether this account be true or false, indisputably true is it that there are in the door to this day two plugged holes of the proper dimensions for the respective egresses of cat and kitten." I haven't been able to confirm the existence of the former holes, as the little researcher now stationed in Britain elected to attend Oxford instead. However, assuming Wright wasn't lying, we may conjecture as follows: someone spots holes of unknown provenance in a door to Newton's old rooms, assumes Newton put them there, notes they're the right size to fit cats, and contrives a story to fit the holes.

4. Told initially to illustrate the foolishness of the wise, this much-recounted tale was seized upon by someone, presumably a cat fancier, for the different purpose of establishing that one of the great scientific minds had devoted a few clock cycles to inventing a convenience for cats. This is the form in which the tale is mostly seen today.

5. However, even if the holes were Newton's doing, the early accounts don't say Newton invented the cat door or flap, which is the crux of the claim. Merely cutting a hole in a larger door as an animal entrance long predates Newton. Online we find a photo of a cat hole in a door from 15th-century France, and a cat hole figures in "The Miller's Tale" from Chaucer's Canterbury Tales, written in the late 1300s. I got the latter from Wikipedia, which some will find unseemly, but A. just because it's in Wikipedia doesn't prove it's wrong, and B. I checked in Chaucer and it's there.

As for actress-slash-weapons-inventors: in most of the celebrity-inventor stories you hear about, the celebrity is more or less in the business of inventing things, or had others do the inventing for them. For example, filmmaker George Lucas has his name on many inventions, but most came out of his movie special-effects shop, Industrial Light and Magic.

Nonetheless, a few Hollywood types did invent things that had little or nothing to do with their careers. Examples:

To cite the best-known example, yes, actress Hedy Lamarr and composer George Antheil were awarded a 1942 patent for a "frequency-hopping" device—to prevent radio-guided torpedoes from being jammed by the other side, their invention changed transmission frequencies at short intervals. Transmitter and receiver were kept synchronized on the same wavelength by matching player piano rolls in both. Navy brass balked at putting tiny player pianos in weapons, and the technology wasn't employed by the military until the 1960s. But it's proven durable since then—today, you can find frequency-hopping spread-spectrum technology in some cell phones.

In 1998, magician Penn Jillette patented a "hydro-therapeutic stimulator—basically, a bathtub orgasmatron for women featuring a user-controlled water jet plus a vibrating seat. One admires this classic case of filling a niche. Nonetheless ...

My favorite celebrity inventor remains Neil Young, whose name is listed on 22 patents for model-railroad technology. I suspect Neil was more the facilitator than the prime mover on these inventions (at one time he held a minority interest in Lionel). But to see a rock legend in an engineer's cap at the controls of a roomful of model choo-choos—all I can say is: 1. been there, and 2. who knew?