Paul turns into a journey through its writers’ pop-culture nostalgia. 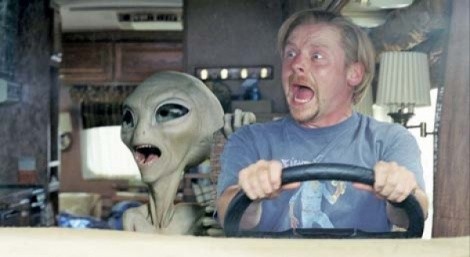 The titular alien in Paul is, apparently, of crucial importance to our nation. He has escaped from a government facility, and men in black are in hot pursuit, but one gets the impression that it’s not because of his cosmic wisdom or technological know-how. More likely, it’s because within his diminutive frame lies power over a crucial sector of the U.S. economy: the origin of all fanboy movie culture from approximately 1977-1990.

Simon Pegg and Nick Frost clearly love using their own movies to talk back to the movies they love, but that doesn’t make them unique among filmmaking voices; auteurs like Brian De Palma and Quentin Tarantino pay homage to the cinema that inspired them on a regular basis. But in their previous collaborations like Shaun of the Dead and Hot Fuzz, Pegg and Frost have been unapologetic about their adoration in particular for the kind of mass-market pop-culture—zombie movies, buddy-cop action flicks—that they would have slurped up as 1980s teenagers. Paul is simply the latest manifestation of that goofy enthusiasm, which results in something that is equal parts endearing, sloppy and overly ingratiating.

There’s something perfectly appropriate about the fact that Paul opens at San Diego’s legendary Comic-Con, where Brit buddies and inveterate nerds Graeme (Pegg) and Clive (Frost) are making their first wide-eyed visit. But they decide they’re also going to use their first visit Stateside to take an RV road trip to landmarks of the alien-conspiracy set in the American Southwest: Area 51, Roswell and the Black Mailbox. They certainly don’t expect that they’ll have their own close encounter with the aforementioned escaped alien (voiced by Seth Rogen), who desperately needs help getting transport to a planned rendezvous with the mothership as he hides from the agent (Jason Bateman) who’s following him.

At first glance, Paul might seem to be a unique twist on the alien visitor—full of interesting, mysterious abilities, sure, but also a guy who likes to smoke, throw back some beers and pepper his remarks with not-for-prime-time words. Rogen gives him the familiar Rogen-esque vibe of someone easily irritated with stupidity who just wants to hang out and be left alone, which also gives him more than a passing personality reference to another pop-culture character: He’s Howard the Duck with oversize eyes.

And that’s actually one of the more subtle points of reference included by Pegg, Frost and director Greg Mottola (Superbad). Paul turns into a virtual cavalcade of quips, quotes and homages that only begins with E.T. (and a phone conversation between Paul and a certain blockbuster filmmaker about what qualities to give a kindly extraterrestrial). Close Encounters of the Third Kind? Check. Back to the Future? Check. Aliens? X-Files? You betcha. The original Star Wars trilogy? Oh, if only I had another whole paragraph. Like it was some sort of nerdnip, Pegg and Frost give us familiar one-liners to roll around in until we’re too giddy to think straight.

You’d best not be immune to the effects of that chemical compound, though, because if you are, then Paul doesn’t offer a heck of a lot. Graeme and Clive pick up another traveling companion—and potential romantic interest for Graeme—in Ruth (Kristen Wiig), a sheltered and pious woman whose conversion to profanity-hurling machine is just one part of some easy shots at fundamentalist Christians. Indeed, virtually all of the jokes that aren’t based on some reference to pop culture seem to involve the presumed inherent hilarity of creative multi-hyphenated vulgarities. It’s like somebody split Kevin Smith in two and gave them both English accents.

None of which is to suggest that Paul doesn’t have some pretty funny stuff in it. Most of the best gags are reserved for the third act—including a few truly inspired visual moments—and those who are on the film’s geeky inside-joke wavelength are likely to have a blast. But Pegg and Frost are so immersed in their nostalgic movie-rapture that they don’t seem to care that dropping a reference to the 1988 E.T. ripoff Mac and Me is more likely to inspire blank stares than laughter in a contemporary audience. There’s nothing wrong with an enduring affection for the movies that made you fall in love with movies, provided you pay your respects in a way indicating that, over the subsequent 20 years, you’ve grown up a little.