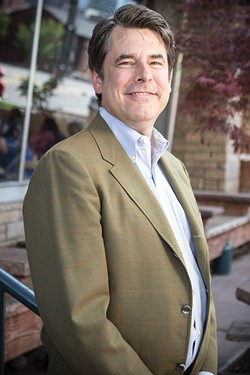 The most radical campaign issue of the Salt Lake City mayoral race is also the one that no one is talking about. That's probably because the idea—"participatory budgeting"—has the kind of snooze-tastic name that means little to most people, aside from a few policy wonks like Luke Garrott, a political science professor at the University of Utah, city councilman and contender in the mayor's race. The participatory budgeting (PB) model sets aside money for citizen's groups to decide directly on capital project expenditures—structures such as parks and roads—giving them, not bureaucrats or elected officials, the final say.

As unorthodox as it sounds, for Garrott, it's simple. "This would be very meaningful participation for people, deciding how money is going to be spent in their neighborhood," Garrott says. "What an idea! It's called democracy."

This model is one that Garrott says should happen at the neighborhood level, but one he would like to see expanded throughout the entire city, allowing special neighborhood delegates to come together in an assembly that could push for the funding of major infrastructure projects on the same scale as the Utah Performing Arts Center or the Public Safety Complex adjacent to Library Square. This push for more "people power" lines up well with Garrott's academic background, but for some, such as David Everitt, chief of staff to Mayor Ralph Becker, a representative democracy is all about the public trusting their representatives to carry out the citizens' will or face being booted out at the polls. That rule applies to everything—including the way capital improvement projects are prioritized when it comes to filling potholes or fixing streetlights.

"It's not a perfect system, but I think it does its best to address specific neighborhoods' needs, but in the context of the whole city," Everitt says.

The PB model is said to have got its start in 1989 in Brazilian cities like Porto Alegre, where citizens wrested control of municipal coffers from corrupt politicians. Since that time, Brazilian cities have spent the equivalent of hundreds of millions of dollars on citizen-driven projects. In 2013, researchers published a study of 120 PB cities in Brazil, compared to 130 that did not use the model, and found the PB cities spent more on education and sanitation, and they saw significant decreases in infant-mortality rates.

The PB model has now spread to more than 3,000 cities worldwide, including the United States; in 2009, a Chicago city alderman set aside $1 million in the budget for his constituents to use to fund capital projects.

According to David Beasley, a spokesman for the Participatory Budgeting Project, an organization advancing the model, there are currently more than 50 PB projects in U.S. cities, counties and school boards.

The PB model, he says, is popular because it empowers those marginalized from the traditional civic life: people of color, low-income residents, non-native English speakers, ex-felons who can't vote and even residents who are not yet old enough to vote. Beasley points to the Boston PB group, which is made up of youths age 12 to 25, who, in recent years, developed community Wi-Fi, expanded a bike-share program and funded water-bottle refilling stations in the city.

"Even as young people who can't even vote, they stepped up as people in their community to make Boston better," Beasley says.

He also says the projects help invigorate communities—but first, a public servant must be willing to cede some control to a community group. While this may be difficult for some politicians, Beasley says the reality is that those who trust their constituents enough to directly drive funding projects are often rewarded for that trust come election time.

"Elected officials who do participatory budgeting get re-elected; that's something we've seen in every instance so far," Beasley says. "They hear over and over again that their constituents trust them more and feel the reciprocity of that trust."

Garrott says the way Salt Lake City handles capital improvements does provide opportunities for community groups to make applications, but in his experience, such projects rarely get funded.

Currently, the Community Development & Capital Improvement Project Advisory Board, made up of citizens from every council district, forwards project recommendations to the mayor's office. The mayor makes his own recommendations that the council votes on as part of the budget process (with council members likewise adding their own projects to the list along the way).

Garrott says that often, the lists of streets, curbs and sewer lines to fix that come from the mayor's staff are based on the plans of engineers and staff who are far removed from the reality of what's happening in the capital city's neighborhoods.

"So you're either going to let bureaucrats do it according to this mathematical formula that no one can understand, or let people who are in neighborhoods and see the needs every day make the priority list," Garrott says. At this level, Garrott sees the idea as truly empowering community councils, which are mostly powerless right now, he says.

For the big-ticket items, Garrott envisions a process whereby public delegates elected by community peers would meet every two to three years to develop ideas for major infrastructure projects. These projects could then be placed on the ballot, at least on equal footing with bonds driven by public leaders.

Such an elaborate system of finding people to represent communities could be an expensive proposition, but Garrott says the money would be better spent than it currently is.

"You know how much money we spend now on dishonest public participation?" Garrott asks. "Making decisions ahead of time and then having public 'engagement' to ratify a decision that's already been made?"

Chief of Staff Everitt, however, says that the current system is filled with opportunities for involvement. Citizens can comment on the Open City Hall online forum, watch broadcasts of council sessions and take part in dozens of annual meetings and open houses. He also questions the idea of crafting such an elaborate system, especially when voters elect their leaders to lead, not to abdicate that responsibility.

"Does the inefficiency of all of this outweigh the political theory of trying to involve more people?" Everitt asks. "Some people want to be involved, but they also want things to move along; they want leaders who get things done." And if those leaders can't accomplish the public's will, then it will cost them at the polls, Everitt says.

For Garrott, however, the true test of the public leader is not how they govern but how they empower constituents.

"This is the way politics can be more than just a necessary evil—it can actually be a community-building exercise," Garrott says. "It creates in the individual ownership because they had a say in these decisions that matter."