I took one look at the title of the first song, “It’s Hard to Be Humble (When You’re From Alabama),” on Phosphorescent’s Here’s to Taking it Easy album and groaned. Then the horns started blasting, the easy acoustic grooves kicked in and Matthew Houck’s distinct, warm twang burst through to make me rethink my anti-Alabama bias (it helps that ‘Bama native Houck is now living in Brooklyn). The album landed on several 2010 “best of” lists, from Britain’s MOJO to America’s Paste Magazine, and Houck is taking his show on the road all over the States this spring, including stops at Coachella and Bonnaroo after this Salt Lake City stop. Family Band opens the show. The Urban Lounge, 241 S. 500 East, 9 p.m., $12

Movits!
When none other than comedian Stephen Colbert calls you the “kings of Swedish-swing-jazz-hip-hop,” you know you’re going places. Or, at the very least, you’re going to revisit the Colbert Report set, where Movits! made their U.S. debut in July 2009. Following that exposure and the comic’s endorsement, Movits! toured the States and made quite an impression, thanks to the image of three Swedes in tuxedos busting rhymes in their native tongue while delivering dance-party beats that transcend any language barriers. Now they’re back with a new album, Out of My Head, and a tour stopping in Salt Lake City. Lake Mary and La Farsa are also on the bill. Kilby Court, 741 S. Kilby Court (330 West), 7 p.m., $10 advance/$12 day of show 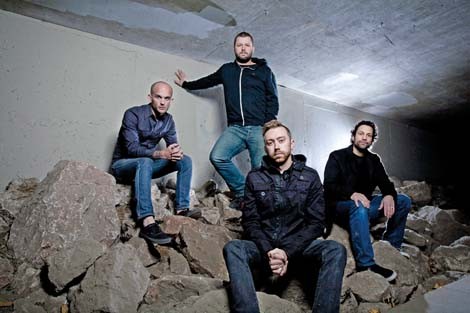 On a recent edition of KRCL’s Radioactive, I was part of a discussion of modern music and politics, and more specifically, where are the modern protest songs? I wouldn’t say Rise Against specifically writes them, but the band has no problem wearing its politics on its collective sleeve while still being a best-selling, major-label entity. The band’s new album, Endgame, addresses issues like the slow government response to Hurricane Katrina and the homophobia that leads to suicides in the LGBT community, and it does so with a whip-smart brand of rock that helps the messages get through. Joining Rise Against on their current tour are punk pioneers Bad Religion and Four Year Strong. Great Saltair, 12408 W. Saltair Drive, Magna, 7:30 p.m., $26

Romantic entanglements within a band are dicey things at best, but when they aren’t the reason for an ultimate breakup (both musical and personal), the romantic tension often can drive artists to new creative heights. So it seems with The Submarines, pop-rock project of John Dragonetti and Blake Hazard, who only realized how good their musical chemistry was after breaking up four years into their relationship. The breakup was nothing a short round of heartbreak, sadness and songwriting couldn’t fix, and they got back together and landed a record deal in 2006. Their latest, Love Notes/Letter Bombs, was released this year. Nik Freitas opens the show. The Urban Lounge, 241 S. 500 East, 9 p.m., $12

Monday April 18
Dark Dark Dark
Given their name, you might not expect the colorful sounds that fill Dark Dark Dark’s most recent album, Wild Go. The band incorporates flourishes ranging from New Orleans jazz to gypsy-folk, roots-rock to straight-up pop in crafting its songs. With the ethereal voice of Nona Marie Invie out front, Dark Dark Dark is capable of joyful flights as easily as delving into eerie turf more representative of their name. Why Are We Building Such a Big Ship and The Mighty Sequoya open the show. Kilby Court, 741 S. Kilby Court (330 West), 6:30 p.m., $8

Tuesday April 19
IAmDonald
You might know Donald Glover as “Troy” on the NBC comedy Community, or from one of his many standup specials and talk-show appearances. But did you know he was a writer on 30 Rock before landing the part of Troy? That takes some comedy chops. And did you know he’s had a music career of sorts going since 2008, when he released an album called Sick Boi under the guise of Childish Gambino? He’s continued releasing tunes under that name, and they are mostly hysterical homages to rappers like Kanye West, equally filthy and funny. On this “I Am Donald” tour, Glover basically opens for himself, doing a standup set before doing a music set with a full band. The Complex, 536 W. 100 South, 8 p.m., $16

Long-time Supersuckers fans know the rambunctious rock band and its leader Eddie Spaghetti have a soft spot for country music; the band’s 1997 twang-heavy set Must’ve Been High even featured a guest spot by Willie Nelson. Spaghetti’s solo albums have continued down the path of Willie, Merle and Hank for the most part, but his brand-new release, Sundowner, puts a country spin on some unexpected source material; namely, tunes by lounge lizard Dean Martin and punk legends The Dwarves. In Spaghetti’s hands, the translations are remarkably listenable, and put them alongside tunes by Johnny Cash, Steve Earle and Spaghetti himself and you get a fine set of drinkin’ tunes by a man who knows how to throw a proper party. Michael Dean Damron opens the show. Burt’s Tiki Lounge, 726 S. State, 9 p.m., $10 advance/$13 day of show