Melissa Leilani Larson's Pilot Program manages the tricky balance of being an "issue" play—dealing with polygamous marriage—while still being a poignant, accessible work unburdened with the specific issue itself. The narrative concerns a near-future Salt Lake City heterosexual married couple who, due to the wife's infertility, are selected for a "pilot program" as a test case for polygamous marriage. They choose one of the wife's former students, with whom she was close—and who, it also transpires, once had a bit of a crush on the husband.

It's hardly a spoiler to note that the arrangement doesn't go off without a hitch. But where Larson's approach succeeds is in not putting the premise through the wringer of melodrama. Pilot Program's greatest strength is its willingness to be quiet, to forgo simplistic binary morality, and ot abstain from meretricious attempts at wrapping the story up in a neat bow.

Jerry Rapier's direction upholds the fine Plan-B Theatre Company tradition of regarding bodies in space as inherently interesting, which never fails to make for visually compelling theater. The actors whose bodies traverse this particular space are topnotch; Mark Fossen, April Fossen and Susanna Florence Risser use both written text and interstitial silences to full advantage. Their collective ability to be grounded helps keep the text human and relatable. One needn't have direct experience with polygamy to know what it is to lose someone who's still in the same room—thus, Pilot Program, while Utah-specific in a literal sense, could play anywhere in America with similar effect. Plan-B Theatre Company, Rose Wagner Center, 138 W. 300 South, 801-355-2787, April 9-19, $20, PlanBTheatre.org 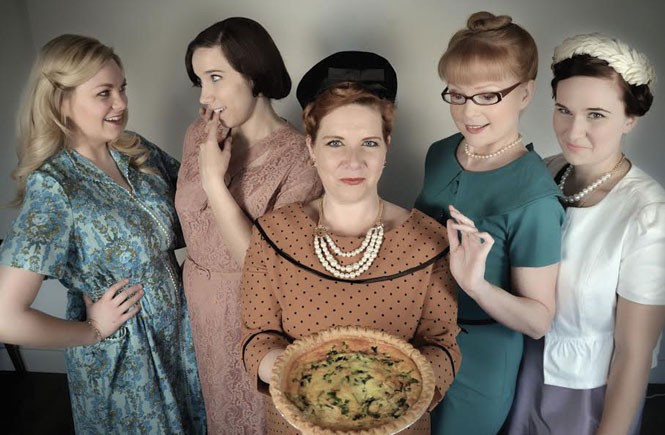 
5 Lesbians Eating a Quiche opens with the audience being given name tags and informed that they are attending the annual quiche breakfast of the Susan B. Anthony Society for the Sisters of Gertrude Stein. It is 1956; Communism and nuclear war threaten the free world. It is a time to gather with your fellow "widows" (the lesbians take a while—despite overwhelming evidence—to realize that they are, in fact, lesbians; until that point, "widows" is the preferred nomenclature) and eat some quiche.

Despite the title, which sounds like either a far-too-aggressive grab at instant cult status or a photograph from Annie Leibovitz's Brunch Period, 5 Lesbians Eating a Quiche is a sharply observed tale of friendship and Cold War paranoia, with fondly celebratory melodrama and plentiful broadly comic innuendo. The ensemble is a capable and winsome one, although the actresses—Lulie Stanwyck, Veronica Schultz, Wren Robin, Ginny Cadburry and Dale Prist—are left largely to support the entire show with little more than energy. The direction lacks focus, to the point where stretches of the show feel entirely unblocked, a different thing entirely from blocking derived from organic motivation.

But this does not, by any means, keep the show from being entertaining, as the text and actors generate enough goodwill to more than compensate for any lack of focus. The text works because, for all the surface silliness, there is a support layer of textual richness, and characters an audience can't help but regard with fondness. Crucially, the lesbians all do actually eat quiche—and in very humorous fashion. Silver Summit Theater Company, Sugar Space for the Arts, 616 E. Wilmington Ave., April 10-26, $15, SilverSummitTheatre.org 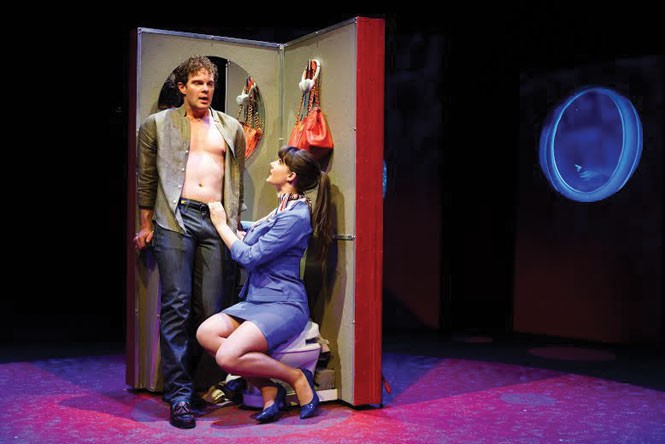 
Salt Lake Acting Company's latest production is a wonderfully smooth piece of stagecraft: visually inventive, energetic and cleverly wrought. That the production works is all the more impressive, considering that the text at its center is a bit of a dud.

William Missouri Downs' script—focused on a series of comedic romances—doesn't lack for cleverness, but it's a glib, superficial variety, with broad, easy jokes and vintage archetypes in place of characters. It may be that one's taste for this style depends on how much one enjoys TV sketch comedy. Mr. Perfect feels, more than anything else, like a series of interconnected Saturday Night Live sketches that benefited from a longer rewrite process, and were pitched at a slightly more literary level. If that sounds like a good time, the previously criticized elements are not likely to spoil the night's entertainment.

And, despite those caveats, Downs does pose interesting questions about how we interact with texts, and delivers some quality word-nerd jokes about tenses, voices and so forth. His dialogue delivers comfortably, and the actors handle it well, though the men (Darrin Doman, Ryon Sharette) have less of an uphill climb than the women (Stephanie Howell, Emilie Starr), who come off more as impenetrable mysteries than people.

Finally, to circle around to the beginning in a formally similar way to Mr. Perfect, the production itself is gorgeous. Keven Myhre's set is terrific, as is James M. Craig's lighting. Despite the script not holding up under close scrutiny, Mr. Perfect is still a show one can have fun with, as most of these flaws are things that will come to mind later, rather than in the moment. Salt Lake Acting Company, 168 W. 500 North, 801-363-7522, April 8-May 3, $24-$38, SaltLakeActingCompany.org