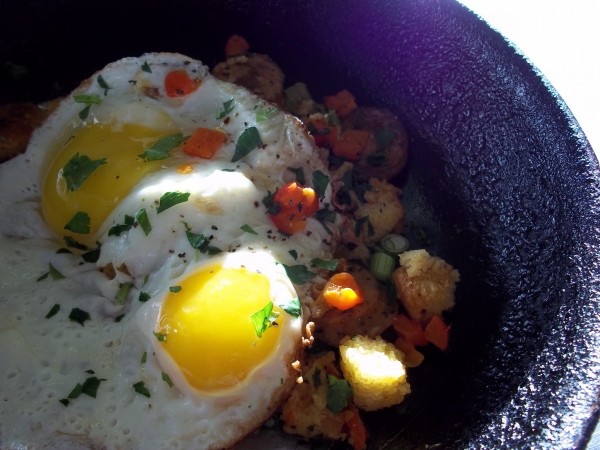 As new, glitzy eateries and markets open in our town, it’s good to remember some of the independent pioneers who first broke ground. One such trailblazer is Victoria “Vic” Topham. Since 1996, she’s been dishing up wholesome, delicious, from-scratch meals—first at the original Piñon Market & Café near the University of Utah and, in more recent years, at her neighborhood spot in the Harvard-Yale neighborhood. Not only does Piñon cover the culinary waterfront—from hearty soups and healthy salads to breakfast and brunch, sandwiches, baked goods, entrees, to-go dinners and full-on catering—it’s also a respite from the hustle and bustle of the city. Piñon Market & Cafe is a place where you can relax and use the free Wi-Fi, read a book or newspaper, mingle with friends or, on the patio, enjoy canine company. At dog-friendly Piñon, there are filled water bowls outside and made-from-scratch dog biscuits available at the counter.

When I think of cafes, I rarely think of eateries with the wide variety and depth of menu choices that Piñon offers. There are just under 30 different salads, for example, ranging from a simple four-bean salad or Caesar potato salad to Indonesian wild rice salad, Korean spinach salad and the popular curry-chicken salad. My fave is the Thai curry pasta salad with Asian noodles and blanched veggies in a spicy Thai curry dressing. Customers also appreciate the versatility of being able to order salads as a side ($2.75 to $3.75) or entree ($5.49 to $7.49).

The sandwich selection, too, is both extensive and eclectic, with a choice of wheat bread, foccacia, sourdough or sourdough rye, all baked in house. There are standards such as oven-roasted turkey ($6.95), honey-mustard baked ham and cheddar ($6.95), rosemary roast beef ($6.95) and the delicious albacore tuna salad ($6.95), which comes with grilled onions, tomato, cucumber and fresh greens. You’ll find an interesting twist on the BLT, too. At Piñon, it’s a traditional BLT, but with not-so-traditional herb cream cheese, cucumbers and blue cheese—hence the name BLT&B.

Still not satisfied? In addition to all those sandwiches and salads, Piñon serves breakfast daily and brunch on Saturdays, as well as a selection of lunch and dinner entrees, available to eat in or to take out. There are also order-ahead platters and boxes, priced per person with a 12-person minimum order. The platter and box menu ranges from simple crudités, sandwich platters or fruit & cheese plates to crispy ravioli with black-olive tapenade, torta Española squares with Romesco sauce, soy beef and asparagus rolls, grilled Malaysian shrimp skewers and individual quiches. So, you should keep Piñon in mind for your next group gathering.

Piñon Market & Cafe boasts a staff of very talented chefs and servers—an especially helpful, creative and friendly bunch. The glue that holds everything together, however, is chef/owner Topham. Her food career began as a delivery-truck driver for Great Harvest Bread Company before moving into the cooking side of the world of baked goods; her desserts, pastries, breads, cakes and cookies are as scrumptious as any you’ll find. Topham learned some of her baking skills at Lagniappe Bakery in Durham, N.C., and then at the well-known Nana’s, before returning to Utah in 1994 where she served as Log Haven’s pastry chef. Having created numerous cakes for Log Haven weddings, Topham still does custom cakes for weddings and other special occasions; her German chocolate cake is to die for. Well, by 1999, Topham had been nominated as one of Food & Wine Magazine’s 10 Best New Chefs—not bad for someone who’d been delivering bread a few years earlier. Topham is also generous. Piñon funds two scholarships annually for the University of Utah’s family & consumer studies department, where she received her degree.

But, back to the food. I especially like an early dinner at Piñon (which closes at 7 p.m.), when there’s a mellow vibe and interesting menu choices such as chicken potpie with sage biscuit crust, or Asian-style salmon cakes with sesame-ginger sauce. Selections vary, but the Piñon Bistro Meal is a prix fixe ($13.99) dinner that includes either a choice of three salads (one meat, two nonmeat) or an entree and choice of two nonmeat salads. Typical entrees include roast pork loin with grilled figs, pancetta and balsamic reduction; pan-seared halibut with a roasted- pepper relish; or chicken piccata with lemon-caper and white-wine sauce.

You’d think all those options would be enough—but not for Topham. She also has created a menu of “healthy meals,” each of which enhances a well-balanced diet with a favorable ratio of proteins, fats and carbohydrates. Fats are used sparingly and, as Topham says, “Trust us, healthy does not equal ‘flavorless’ at Piñon.” In addition, on Thursdays, you can call ahead to order full Friday dinners to pick up and take out, priced at $25 for two adults or $35 for two adults and two kids.

There is still time to enjoy some sunny fall days on the vine-covered Piñon patio, but the warm, cozy interior of the cafe is a terrific spot to dine, too. Wherever you choose to eat it, rest assured that a full meal or a snack from Victoria Topham’s trailblazing Piñon Market & Cafe will be a delectable one.