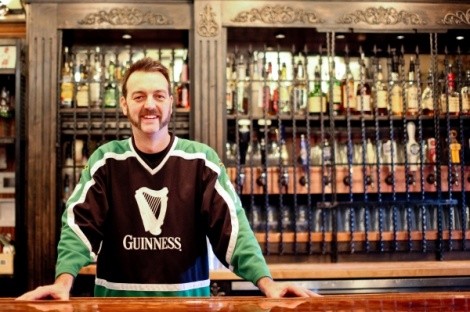 His grandmother made him do it. “Find something you love and turn it into your livelihood” was her sage advice. And Dave Morris loves drinking beer, hanging around bars and socializing (not to mention taking down Utah’s more asinine liquor laws).

It’s not exactly what Grandma intended, but nine years ago, Morris, 40, opened Irish pub Piper Down: An Olde World Pub and has been fine tuning his Saint Patrick’s Day party ever since.

Morris—as much Irish as he is any other European lineage—sits in the recently remodeled back room of his cozy bar. With old-timey paneling, tobacco-colored walls, rustic wooden tables, chairs and bar, and more Guinness paraphernalia than is countable after drinking a couple, it would make a Dubliner nostalgic. However, the nook’s quaintness is nothing close to quiet on weekends, or especially when it’s in the midst of a raucous celebratory holiday.

When we met Morris at Piper Down, it was “28 days, 10 hours and 14 minutes until St. Patrick’s Day,” Morris said quickly, without looking at a clock. He is ready.

“If you open a bar, I don’t know why you wouldn’t open an Irish pub. There’s actually a holiday where you have to go there,” Morris says. “No one stays home on Saint Patrick’s Day, not like New Year’s Eve or Halloween.”

Some Saint Patrick’s Day stalwarts prepare months in advance for the holiday. Piper Down hosts the monthly Kilt Night, which Morris also refers to as “St. Practice Day.” Although kilts are typically Scottish, not Irish, it doesn’t matter. “Everyone is just looking for an excuse to wear it.”

The shindig features two local Irish rock stalwarts: the Heathen Highlanders and Swagger. “The bands play all the old favorites like you’d expect: ‘Whiskey in a Jar’—well, just about every song about whiskey—and everything fiddle-driven that you just have to clap your hands and dance to,” Morris says. To help motivate drinkers to move, the Crawford Irish Dancers bust a jig on the hardwood every month.

All of this is in anticipation of March 17. “It’s for the type of person that would go to New Orleans on Mardi Gras or Times Square for New Year’s Eve; it’s that level of party. Everyone is in this amazing mood; you just feel this energy,” Morris says. “There’s no other day like it.”

Last year, they handed out songbooks—a Piper Down pub hymnal—so that rowdy heathens could sing along and make merry. Other festivities surrounding the big green day include the March 16 eve party with a performance by the Wailing O’Sheas and a whiskey toast at midnight. On March 17, doors open at 10 a.m. for a “Big Irish Breakfast” served until noon, with Irish fare served throughout the day. An acoustic lunch requires no cover, while the cover is only $5 before 4 p.m. Much like “St. Practice Day,” the music lineup will consist of the Heathen Highlanders and Swagger. And, of course, there’s enough Guinness, green beer and whiskey to drown in.

Come March 18, Morris says, “No one wants to hear bagpipes ... so we do a karaoke night to get as far away from it as we can.” It’s called “Professionals Night,” and is for restaurant-industry professionals or just professional drinkers.

With such ado about the special day, we wondered what musical preparations Morris takes. His 32-gig iPhone has a little bit of everything—a smattering of tastes. Though without bagpipes or fiddles, the random tunes turned up some rather interesting anecdotes about Morris’ eclectic life.