Pirates of the Caribbean: On Stranger Tides

On Stranger Tides buries its lead 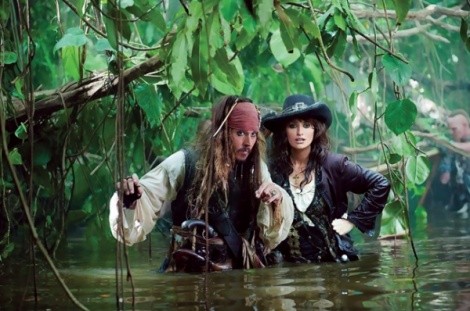 In the abstract, I’m kind of giddy that the Pirates of the Caribbean franchise has reached its fourth installment, On Stranger Tides. Critics aren’t supposed to think such things, let alone say them out loud, because Hollywood franchising is killing our souls and destroying real cinematic creativity and making Baby Jesus cry, etc. But take just a moment to contemplate a series of multi-multi-million-dollar action blockbusters built entirely around a protagonist who’s vaguely effeminate, frequently cowardly and generally disreputable—not just an anti-hero, but anti-the-whole-idea-of-what-a-hero-can-be.

Yes, Johnny Depp’s Captain Jack Sparrow is the kind of character who should be too idiosyncratic to become a pop-culture icon, yet here Depp is, once again, donning braided beard and smudgy guy-liner. We should all be kind of delighted that there’s a space for him in the summer-cinema universe—in the abstract.

In reality, I don’t think anyone really understands what to do with Captain Jack. On Stranger Tides should have been an opportunity to free Sparrow from the burden of the earlier films’ Will/Elizabeth romance and pretzel-logic plotting. Instead, we find Sparrow in London, dashing from a bungled attempt to break his old first mate Gibbs (Kevin McNally) out of prison to search for whoever is putting together a ship’s crew while posing as Sparrow. The fake Sparrow turns out to be Angelica (Penélope Cruz), an old flame of the real Sparrow, who’s serving as first mate for the legendary, much-feared Blackbeard (Ian McShane) on a quest for the Fountain of Youth. Meanwhile, the British Crown has also launched an expedition for the Fountain, led by Sparrow’s old frenemy Barbossa (Geoffrey Rush), who now sports a pegleg thanks to a run-in with Blackbeard—who, in case I failed to mention it, has some supernatural power over ships related to his sword—that left The Black Pearl miniaturized in a bottle. Also meanwhile, the French become a third competitor to reach the Fountain. Also also meanwhile, there’s a romantic connection between an earnest missionary (Sam Claflin) on Blackbeard’s ship and a captive mermaid (Astrid Berges-Frisbey) …

Oh. My. God. Producer Jerry Bruckheimer brought back Pirates screenwriters Ted Elliott and Terry Rossio to loosely adapt a completely Sparrow-free novel by Tim Powers, so apparently Bruckheimer was of the opinion that more of the same was exactly what was called for. And the creative team—with director Rob Marshall (Chicago) now replacing Gore Verbinski—seems to have learned little from the mistakes of the past, while adding a couple of new ones along the way. The attempt to give Sparrow a romantic subplot feels like a drastic misunderstanding of the character’s nature, and there’s never any kind of genuine spark between Depp and Cruz. Meanwhile, the franchise gets its most confusing villain in Blackbeard, whose “I’m just a bad man” motivations don’t give even as formidable a presence as McShane much to work with. Marshall may be a choreographer by trade, but he can’t find a way to keep all the stuff crammed into On Stranger Tides dancing in unison.

And yet, he still has a virtuoso soloist in Depp, which means there’s fun to be had whenever he’s reveling in his Sparrow-ness. Simple chase scenes take on an added kick when Depp is fleeing with Sparrow’s bandy-legged scamper. His marble-mouthed line readings are still a joy, and there’s a particular appeal to the scenes in which he and Rush get to play off of their characters’ history. Whenever On Stranger Tides has the good sense to grant center stage to the reason we’re all here in the first place, it feels like the funky anti-blockbuster the series has always shown glimmers of being.

But it’s somewhat indicative of On Stranger Tides’ limitations that the climactic showdown involves a to-the-death duel between … Blackbeard and Barbossa. While Sparrow gets one great moment trying to point out the absurdity of the inevitable crew-vs.-crew melée to come, he’s generally left to flit about in the background at the point when the dramatic buildup is indicating whose story is central to this movie. Part of Jack Sparrow’s appeal has always been his efforts to avoid physical confrontation when subtlety and outsmarting his opponent will do. If that’s the case, his most stubborn adversary has generally been the stories in which he’s stuck.

PIRATES OF THE CARIBBEAN: ON STRANGER TIDES