Has all of the drinkable water on the planet passed through a dinosaur at some point? 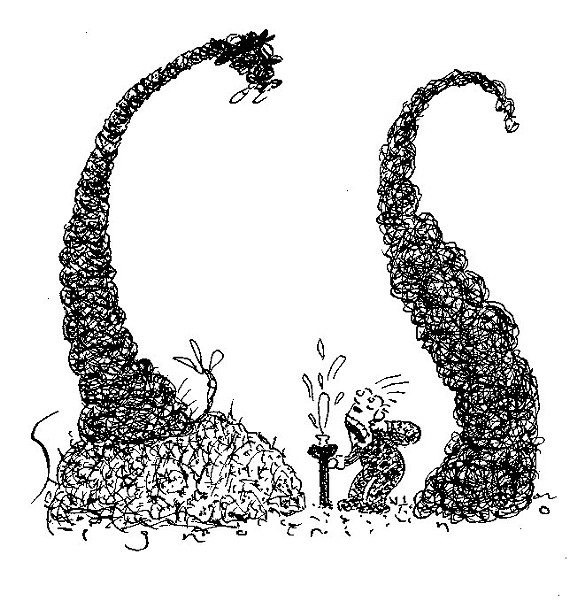 A friend says all of the drinkable water on the Earth has passed through dinosaur kidneys. What do you think?

A friend claimed that all water on Earth is "old" water, billions of years old. I countered that water is a product of combustion and therefore "new" water is continually being created. Also, water decomposes through methods such as electrolysis. How likely is it that the majority of water molecules on the planet are the same bonding of hydrogen and oxygen atoms from billions of years ago?

Just guessing, Jerry: Would this friend happen to be about 8 years old? I ask because it sounds like he or she may be among the nearly 140,000 viewers of a graphically eye-catching video posted last May by Curious Minds, a YouTube channel aimed at sparking children's interest in science, titled "Have you drunk DINOSAUR PEE?" To address your more genteel rephrasing of this inquiry requires that I give Bill and his friend an answer about the age of water, but also points us toward a third, even bigger question: What is water, anyway?

To get this out of the way: Yes, dinosaurs apparently did urinate. For years, scientists figured that dinosaurs, like most of their avian descendants, evacuated liquid and solid waste in a single stream from an orifice called the cloaca. But in 2002 paleontologists in Colorado found preserved, amid a cluster of dinosaur footprints, a 10-foot-long, 5-foot-wide and 10-inch-deep "bathtub-shaped depression"—the result, they concluded, of some primeval liquid-splashing-in-sand event, and the first genuine evidence to suggest that at least some dinosaurs must have produced urine separately, as ostriches do.

Now, no one thinks actual dinosaur tinkle drips from our faucets, or even (I hope) that any trace particle of dinosaurs' waste has lingered in our water supply for the 66 million years since their extinction. In fact, author-reporter Charles Fishman was making a point about the resilience of the water cycle, which naturally filters out such impurities, in his 2011 book The Big Thirst: The Secret Life and Turbulent Future of Water, when he devised the bold claim that his press materials simplified thus: "The water coming out of your kitchen tap is four billion years old and might well have been sipped by a Tyrannosaurus rex."

The reasoning behind Fishman's assertion (and, later, Curious Minds') is straightforward enough. Though nearly 1.4 billion cubic kilometers of water exists on Earth, and pretty much always has, 96.5 percent of that is seawater. Only 11 million cubic kilometers is fresh, much of which is locked away as groundwater or in glaciers. That leaves only 93,000 cubic kilometers of water available for beverage use. The age of the dinosaurs lasted 135 million years, more than enough time for them to consume all the potable water that evaporated and precipitated across the globe. And what goes in, of course, must come out.

But how much of the water we drink today existed back then for dinosaurs to guzzle? Fishman says, "No water is being created or destroyed on Earth." Well, that's clearly untrue. Destroying water is pretty easy—high-school chem teachers do it all the time, using just an electrical current; as Bill notes, the process of electrolysis splits water molecules into hydrogen and oxygen gases. As for creating water, it's a regular function of a society that burns as much fossil fuels as ours does.

Combustion produces about only 10 cubic kilometers of water per year, though, and humans have been burning fossil fuels at a significant rate for less than a century. To say our energy usage has created one percent of the available drinking water on earth in that time would be an exceedingly generous estimate. So Curious Minds isn't off-base in saying that "the total amount of water on earth has been fairly constant." The fact remains: There is fresh water now available for human consumption that no dinosaur could have drunk first.

OK, now let's go big-picture: What is water? Duh—two hydrogen atoms, one oxygen, right? Basically, but it's not that simple. Though water is a highly stable compound, water molecules are dynamic little critters, their component particles constantly splitting off and recombining: In the biochemically crucial process of autoionization, hydrogen atoms continually peel off and attach briefly to other water molecules before moving on. All told, in the liquid state, your average H2O grouping hangs around unchanged for maybe a millisecond.

So, sure, when you turn on your shower, the individual hydrogen and oxygen atoms that emerge may at some point have seen the inside of a dinosaur. But they've mixed and matched with each other so often since that their relationship to whatever once filled some diplodocus' bladder is, to put it mildly, tenuous. And if that still makes you squeamish? Trust me, you don't even want to think about what might have happened with all the dinosaur crap. CW