On the prowl for the perfect local pizza 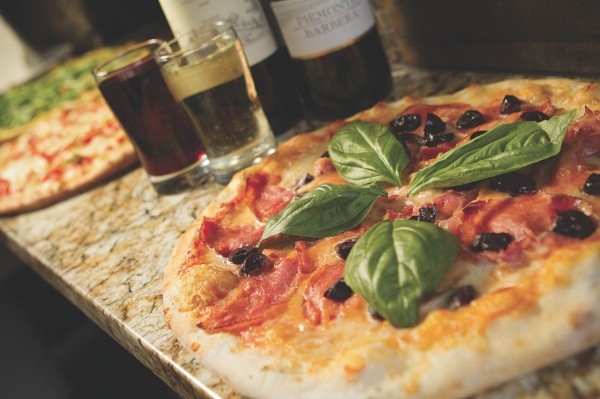 For pizza lovers—and who doesn’t love pizza?—the pursuit of the perfect pie is an ongoing quest, one without end. There is always another pizza pie to try, another nice slice.

Recently, I wrote about one of my best-ever Utah pizza finds: the wood-fired pizza at From Scratch (62 E. Gallivan Ave., Salt Lake City, 801-538-5090, FromScratchSLC.com). Since I reviewed that fine eatery a couple of months ago, I won’t belabor that pizza point here. What I will do is present you with a quartet of pizza places that, if they’re not already on your pizza radar, ought to be. I’m adding these to the other can’t-miss pizza joints that I’ve written about in the past; you can find those in the City Weekly archives.

I should note that I’m always a bit hesitant to write about pizza, since opinions and loyalties run so strong on the subject. Not all pizza is created equal, and in some cases, comparing pizzas side-by-side is akin to choosing favorite children. Each is unique. Neapolitan, New Haven, New York City, Chicago, wood-fired, coal oven, deck oven: each pizza is like a snowflake, and I love a good blizzard.

First up: Pie Hole (344 S. State, Salt Lake City, 801-359-4653, PieHoleUtah.com) has the stuff to make folks who moved here from New York City, like me, giddy. Beginning with hand-thrown pizza dough, this is the type of pizza you purchase in the Big Apple by the slice, fold and eat. It’s cooked in a standard deck pizza oven, and the crust might be just a smidgeon thinner and crispier than most of the street slices in NYC. But Pie Hole pizza has just the right amount of sauce (the pizza isn’t swimming in it) and cheese (not overloaded) to compete with Este Pizzeria for the best NYC-style pizza in town.

The Pie Hole ambiance is Animal House, with one-buck PBRs, pizza by the slice or whole pie, a friendly crew and great music. This is the place for late-night noshing: Pie Hole delivers and stays open until 2 a.m. nightly and until 3 a.m. on Fridays and Saturdays. I think the plain cheese pizza is the bomb, but the missus really enjoys the vegan pizza: cheese-free and brimming with veggies. You can’t go wrong with the daily special of two slices and a soda for $5.

A couple of years ago, I wrote about Cafe Galleria in Midway (101 W. Main, 435-657-2002). The pizza there is among the best I’ve ever had. Well, I’m happy to report that now there is a second Cafe Galleria location, this one in Murray (6055 S. 900 East, 801-266-2225, CafeGalleriaPizza.com). The pies here are Neapolitan-style, cooked in a wood-fired oven. They’re larger in diameter than most of the pizzas you’ll find in Italy, but have the thin crust and wholesome flavors of the best of that country’s pizzas. The dough is made using 00 Caputo flour, and the sauce is simple, made from San Marzano tomatoes.

But one of the things that sets Galleria pizza apart is the high quality and flavor of the cheeses. The owner, Cecil Duvall, is an artisan cheesemaker, and his Duvall Farms cheeses top his fabulous pies; he makes it all, from goat cheese and ricotta to mozzarella and Parmesan. The mozzarella-Parmesan mix used on most of the Galleria pizzas is perfect.

To the north, in Layton, Gabor Brothers Main Street Grill & Pizzeria (197 N. Main, 801-544-4344) is a long-lasting independent in a sea of franchise eateries. It’s usually packed, a testament to the wholesome, fresh Italian fare served here. Thankfully, there’s a small bar in front where you can cool your jets whilst awaiting a table.

There are two pizza options at Gabor Brothers: thick, Chicago-style crust or standard thin, although not that thin. I prefer the thin-crust pizzas and the abundant toppings that come on them. The crust is slightly charred around the edges, and the cheese lightly browned. It’s good ol’ American-style pizza at its best; they’ll even sell you a Hawaiian pie if you’re interested. Don’t overlook the calzones, which are top-notch too. And it probably goes without saying that the wildly popular Gabor Brothers breadsticks are an absolute must-have.

Ironically, the newest of my favorite pizzas comes from place that’s been around for 50 years: Tony’s Pizza. This family-owned Ogden gem just off of Harrison Boulevard (403 39th St., 801-393-1985) is easy to miss; I’ve whizzed right past it a hundred times. But, last month I stopped into Tony’s, and it was love at first sight.

Well, sort of. The restaurant itself is bare-bones and without much ambiance to speak of. The term “hole in the wall” might have been coined to describe Tony’s, which doesn’t look like it’s been updated since it opened in the 1960s. But that’s OK, because once the pizza arrives, any décor foibles are forgiven.

The founder, Tony, is still around, and his grandkids mostly run the restaurant, providing the kind of family-style friendly service that is all too rare nowadays. Like the décor, the menu is sparse: There are a few pasta dishes, garlic bread, sandwiches, salads (skip them) and pizza. Pizza toppings are traditional; don’t come looking for artichoke hearts, shiitakes or truffles. But a classic ground beef or pepperoni pizza at Tony’s is a blast from the past—the honest, delicious pizza I remember from childhood.

Got any pizza favorites? Let us know!