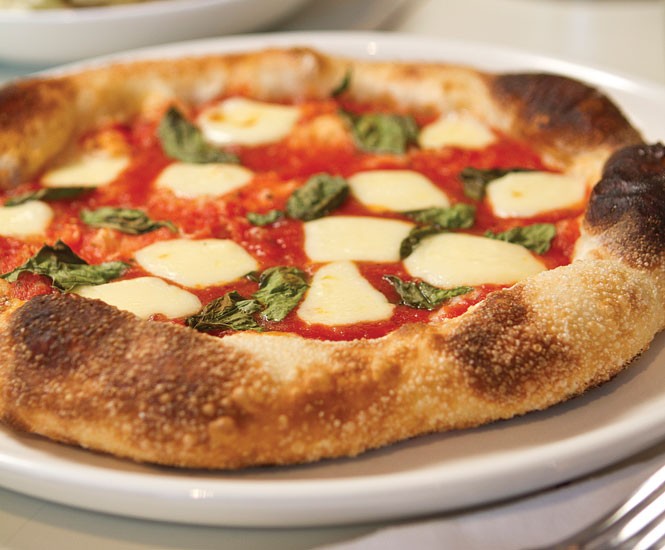 Once or twice a year in this column, I turn my attention to what might just be the most perfect food ever created: pizza. I do so in part because nary a week goes by that somebody doesn't ask me about my favorite pizza joint. And my answer is always a bit more complicated than the questioner expects. That's because I have a number of favorite pizza eateries, depending on the style of pizza I'm in the mood for. I'll tell you what my picks are, but keep in mind that this topic is as subjective as it is explosive. Wars have broken out over less serious matters than pizza preferences. These are mine and mine only.

The way I see it, there are five major pizza groups: NYC, Neapolitan, Windy City, American Classic and Wild Card. You could make a strong argument for including New Haven-style pizza as its own category, and maybe even fancy-pants "gourmet" pies (think California Pizza Kitchen). But the most pervasive and persuasive pizza-pie styles are the type you find in The Big Apple, the Vera-certified Neapolitan-type pizzas, Chicago-style, cheesy American pizzas, and then everything else (the Wild Cards).

There isn't just one type of New York City pizza. Big Apple pizza ranges from the ultra-cheesy slices at Famous Ray's on 6th Avenue and 11th Street and the coal-fired pies at John's Pizzeria on Bleecker Street to the Neapolitan pies at Paulie Gee's in Brooklyn, and Joe & Pat's incredible thin-crust Staten Island pizza. However, when most of us think of NYC-style pizza, we're thinking of the by-the-slice plain cheese pizza served on paper plates and often eaten on the run. For that, I turn to Este Pizzeria (2148 S. 900 East, Salt Lake City, 801-485-3699; 156 E. 200 South, Salt Lake City, 801-363-2366, EstePizzaCo.com). The crust is just right: not too thick and not too thin, and the folks at Este never overdo the cheese-to-sauce ratio.


For the best wood-oven Naples-style pizza in town, I take a seat at From Scratch (62 E. Gallivan Ave., Salt Lake City, 801-961-9000, FromScratchSLC.com), particularly the Margherita, which is nothing more than crust made with flour milled in-house, housemade mozzarella, Bianco de Napoli tomatoes and fresh basil. It's a glorious example of the "less is more" principle. For a more complicated pie, try the Salumi, made with speck, tomato sauce, mozzarella and Creminelli salumi.


When most of us think about Chicago pizza, we probably think of the thick, deep-dish pies made famous at Pizzeria Uno, The Original Gino's Pizza, Connie's, Giordano's and others in the Windy City.However, equally in demand in Chicago—maybe even more so—is Chicago-style thin-crust pizza of the type you'll find at Sweet Home Chicago Pizzeria (1442 E. Draper Parkway, Draper, 801-545-0455, SHCPizza.com), which is also called a "flat" pizza in the Windy City. As the former owner of a successful pizzeria in Chicago's 'burbs called Pepe's, Jim Pecora relocated to the Salt Lake Valley with the intent of bringing "real" Chicago pizza to Utah. Mission accomplished.


For über cheesy, chewy, American classic pizza of the type most of us either grew up on or learned to love in college, Utahns tend to turn to The Pie Pizzeria (multiple locations, ThePie.com). Since 1980, university students, families and anyone else with a hankering for a large, overloaded pizza pie have been going to The Pie—a perennial City Weekly Best of Utah winner in the pizza category—for their pizza fixes. You can't argue with The Pie's recipe for success, and for their rib-sticking pizza.


Of all the pizzas in Utah, my very favorite is probably one of the hardest to categorize. It's at Maxwell's East Coast Eatery (357 S. Main, Salt Lake City, 801-328-0304; 1456 Newpark Blvd., Park City, 435-647-0304, MaxwellsECE.com), home of the Fat Kid Pizza. You can get Maxwell's pizza by the slice, or as a 20-inch pie. The best of the bunch is the one topped with meatball slices. This pizza is of the type you find in southern New Jersey and the Philadelphia area: hearty thin-crust pies with high-quality cheese and a light touch of sauce. Steven Maxwell, owner of Maxwell's, is of Italian descent and hails originally from New Jersey. Somewhere between Penns Grove, N.J., and South Philly, he learned how to make a bodacious pizza pie, and it's one that I depend on until my next visit to South Jersey.

Where do you go for your favorite slice o' pizza pie?