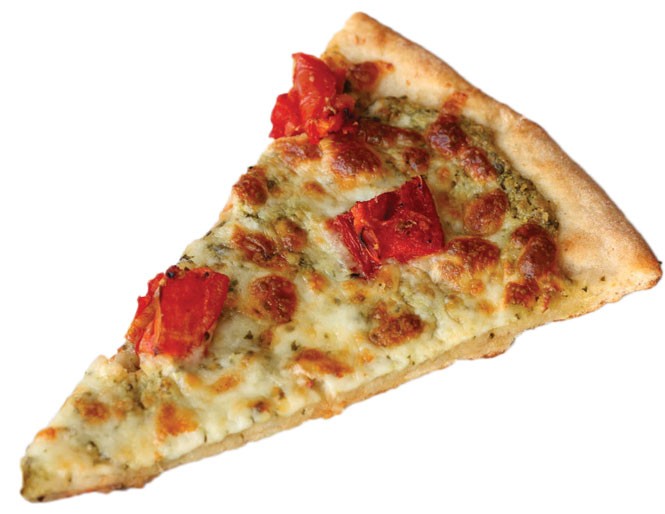 Anyone with even a mild acquaintance with this column and its author knows that I am continually involved in the relentless pursuit of the perfect pizza. I've lost track by now of the number of articles I've written here on the subject, so let's just call this one "Part 17." Who needs round numbers?

I should point out that in those many pieces, I've written about dozens of Utah pizza joints. So if your favorite isn't touched on here, you might want to take a gander at the City Weekly archives before crying foul. I attempt to try out as many pizza emporiums as humanly possible, but even I can't live on pizza alone. Sometimes, I need a calzone. Anyway, these pizza places are either relatively new, or new to me, and I like them all to various degrees. After all, why waste time talking about lousy pizza?

For a while now, various folks have been encouraging me to get my ass up to Ogden to check out Lucky Slice (200 E. 25th St., 801-627-2229, TheLuckySlice.com). For pizza lovers in Davis County, there's a new Lucky Slice location in Clearfield (1245 S. Legend Hills Drive, 801-820-6992) and, further up north, Lucky Slice pizza is sold during the winter season at Powder Mountain's Timberline Lodge. This is very good New York-style pizza, close to the type you buy by the slice at any of a thousand (probably more) pizzerias in the Big Apple, from Staten Island to Queens.

A slice at Lucky Slice sells for $3-$3.50, and it's a generous wedge taken from a big 20-inch pizza. Whole pies run from $10 for a basic 14-inch cheese pizza, to $23 for a 20-inch pie with five or more toppings. The options for toppings and sauces at Lucky Slice are mind-boggling: Thai peanut, ranch, herbal, barbecue, creamy pesto and more. Then, there are the specialty pies, like the unusual potato pesto or tapenade (maybe not surprising, since chef/co-owner Will Shafer is a graduate of Le Cordon Bleu). Still, the best way to experience Lucky Slice pizza is the simplest: hand-tossed crust, with cheese and fresh tomato sauce. The pizzas are stone-fired and the crust is light, with exactly the right amount of sauce and cheese. Transplanted New Yorkers will approve (although the super-friendly service might take some getting used to).

As at Lucky Slice, the pizzas at Firehouse Pizzeria (multiple locations, FirehousePizzeria.com) are cooked on a hot stone bed, giving the pies a slightly charred, crisp crust. The rim of the crust here is a bit thicker, puffier and airier than the denser Lucky Slice crust, with crisp, cheesy air bubbles. This, too, is a very good pizza. And size options range from slices and $3 small pepperoni pizzas on Mondays, to an outrageous 36-inch "monster" pizza (the equivalent of five large pizzas) priced at $45, plus $9 per topping. I stopped by the Layton location for a 15-inch Italian-sausage pizza with onions ($12.75), and was very impressed. There's damned good pizza at Firehouse!

The Pizza Studio (multiple locations, PizzaStudio.com) concept takes a page from Chipotle Mexican Grill, or maybe Subway. Their slogan is "Create your masterpiece," and that's what you do. First, step up to the counter and choose a crust from among traditional, whole grain & flaxseed, rosemary-herb, "firecracker" or gluten-free options. Next, pick a sauce (tomato, basil pesto, barbecue, extra-virgin olive oil or spicy buffalo) before choosing a cheese. Finally, select from a large menu of "unlimited" toppings, which even include spices like Old Bay seasoning and truffled salt. Pizza Studio pizzas come in a "personal" size (which nonetheless was more than I could eat at one sitting) for $7.99, regardless of the number of toppings chosen. They are cooked in 2 minutes. There are also a few basic pizzas, like pepperoni and Margherita, priced at a mere $5.99. The traditional crust is crisp and thin, with a cracker-like crunch that reminds me of frozen Totino's pizzas, but one hundred times tastier. And, each Pizza Studio supports local artists by hanging artwork on its walls and selling it commission-free. Hey, an $8 pizza with unlimited toppings? Count me in.

Located across the street from the new Holladay Village complex, Slices Pizza (4655 S. 2300 East, 801-613-9901, SlicesPizzaUtah.com) has the potential to become one of a very short list of my favorite pizza joints. It's not much to look at: a few tables and a messy-looking interior. But über-friendly service (from employees like Kimbree) and outstanding pizza will keep you coming back—at the very least, for takeout. Slices run from $2.75 to $3.25, and a one-topping pizza is $15.50 for a 16-inch pie, $17.50 for the 19-inch. The crust at Slices is excellent; at its thinnest point a mere 1/32-inch thick or so, with a delightful snap, while the rest of the thin crust is slightly chewy. I love the housemade meatball topping, although I do wish Slices would go the extra mile and pony up for top-notch Grande mozzarella cheese for their pies. That would be close to pizza perfection.

Finally, one of best pizza bangs-for-the-buck is Zilio's Artisan Pizza (10367 S. State, Sandy, 801-251-1445, ZiliosPizza.com). Like Pizza Studio, the pizzas are all one-size personal pizzas that sell for $4.75 to $5.75. Sign up to receive texts from Zilio's, and you'll get frequent offers for $4 pizzas. They might not reach pizza perfection, but for less that $6, these thin-crust pies are hard to beat.

Now, how about sending me a few words describing your favorite pizza?