Breathing life into the classic text 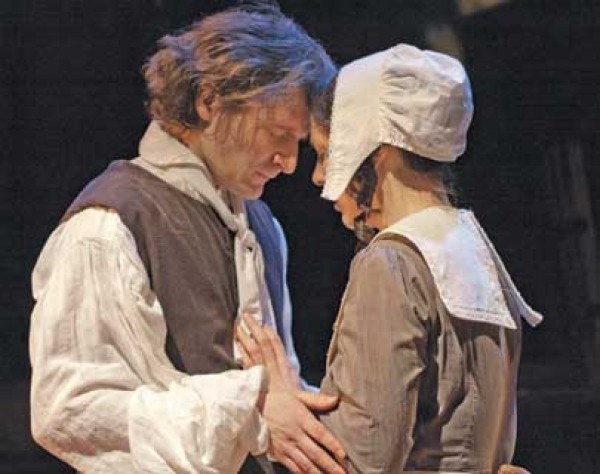 There are certain advantages to adapting a literary classic like The Scarlet Letter, playing now at Plan-B Theatre Company—but there’s a lot of pressure, too.


Most of the audience is probably familiar with the characters and basic story, buried deep among high school English class memories. They know that the titular letter is an “A” for Adultery, worn by Hester Prynne (Lauren Noll) as punishment for bearing a child out of wedlock in a small 17th century Puritan New England village. They probably know that was a really big deal back then. However, when tackling such a monumental text, you darn well better bring your A game.


Fortunately, Jenifer Nii has crafted a tight script that manages to explore the themes of sin, shame, guilt and redemption from the Nathaniel Hawthorne original with a mere 75-minute run time. The show walks a fine of staying true to the original text while allowing some more contemporary tones to slip in, particularly when illustrating the affection and closeness between Hester and her illegitimate issue, Pearl (Claire Wilson).


The cast of four, rounded out by David Fetzer as Dimmesdale and Mark Fossen as Chillingworth, offers excellent performances. Claire Wilson, just a high school sophomore, brings a surprisingly mature control and purposefulness to the wild abandon necessary to the portrayal of Pearl.


So get thee to the Studio Theatre post-haste. There’s nothing at all shameful in desiring to see The Scarlet Letter.