Smack dab in the middle of a sunny Thursday afternoon, I barked into the telephone, loudly scheduling a tee time. “Yes, 2:30 will work,” I told the lady. “I’ll be golfing alone. See you then.”

Jealous of my lifestyle, my co-workers ribbed me a bit as I packed for an early end to the workday.

I don’t fit many—or possibly any—of the clichés that could be attached to a person who knocks off work early to hit the muni’ for nine holes. I don’t own golf clubs. Three years have passed since the ping of my driver last sent a little white ball deep into the bushes, never to be found again. I don’t even have a fancy car; in fact, on this particular day, I didn’t have any car.

So I saddled my 1987 Trek bicycle and began huffing my way toward the Bonneville Municipal Golf Course. My first stop was a 7-Eleven, where I bought a six-pack of beer and a New York Times. 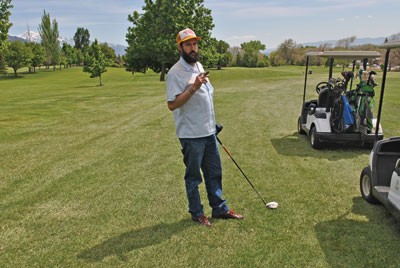 My backpack loaded to capacity, I motored toward 800 South, which winds steeply uphill into Sunnyside Avenue. Just across Foothill Drive is the golf course, at 954 Connor St. Sweating and wheezing, I pedaled into the parking lot, past the pasture of SUVs, Mercedes Benzes and other sparkling machines to the clubhouse. Failing to find a bike rack, I fastened my ride to a rain gutter.

Inside, a group of women wearing matching teal shirts chattered over a pitcher of beer. The air conditioner was on, the water fountain was cold and the voice of a male announcer hummed on the television, tuned to the golf channel.

A nice lady checked me in. She gave me the lookover I’d expected. My Wrangler blue jeans, hiking boots and beard were not very golfy, but she was nice enough to treat me like any other guy who golfs during business hours on a weekday. I rented a pair of clubs for $15. Four used balls and a bag full of teas cost $5. The cart and the greens fees were paid for by City Weekly, but if you were to skip work early and pick up nine holes on the boss’ time, it’d run you $18.50, plus $7 bucks for the cart.

Golfers typically golf in foursomes. Since I was alone, I got paired up with Dennis and Dave, a twosome, and Jarom, a loner like me.

Jarom introduced himself by declaring that he’s a terrible golfer, but acknowledged being a regular at the course. Dennis and Dave looked the part—older gentleman, nice clubs of their own, cackling to each other about business deals. Neither drank beer, and Dave wore a BYU lapel pin that he set down on the putting greens to mark his ball.

None of these men were great golfers—made evident by the fact that after I lucked out on a couple of hits, Dennis remarked that I was “making good contact” and must hit the courses often. Not so, I assured them, as I took a pull of beer and smashed a ball into an adjacent fairway. 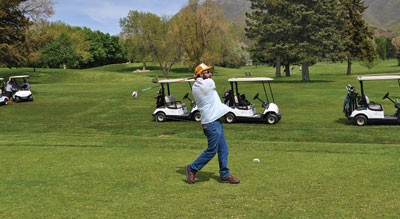 Golfing with strangers can be stressful. Everyone watches everybody else—especially on the tee box where the first whack is taken, before the balls are scattered across the fairway. But at that moment of truth, when the ball is teed up and the driver is whizzing through the air, all of these men’s eyes were prying. Even someone who knows how to swing a club would be self-conscious.

For me, the day was a success. I drank several of my beers and one of Jarom’s Coronas. He even let me take a puff off of his cigar. The guy was really into the leisure of it all, even going so far as to disturb the distant moan of lawnmowers and chirping birds with some music on his cell phone. I got a nice pink sunburn on my face. I got some good exercise (from the bike ride, not the golf). And I made par on the sixth hole.

But most importantly, I now know what it feels like to skip work and mingle with the golfers of the Salt Lake Valley—quite nice, especially with many beers in my belly.

Some men and women take this sport very seriously. As I unleashed my bike to leave, I watched a young kid—maybe 16—chip four balls up onto a putting green. He wore shorts, spiked shoes and he had on a pair of those glasses with shades that flip up. He putted the four balls into the hole, looking mighty annoyed when he missed one. Back and forth he went, repeating this process. He seemed like the real deal, practicing like his old man had taught him so he, too, could either make the pros, or at the very least, leave work early.

But for Dave, Dennis, Jarom and me, our goals involved little more than being outside, laughing about how crappy we were, and hitting balls around meticulously manicured grass—stuff I’ll skip work for any time.