Jumping around not just for kids 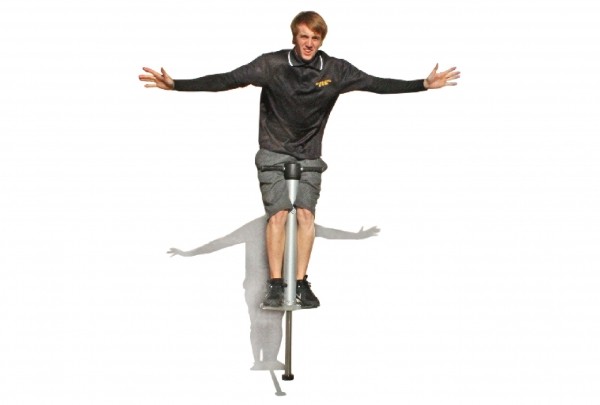 A humble toy has quietly become a big underground fad—and an extreme sport as well. It’s the pogo stick: a fun way to exercise plus a great way to lose weight. There’s now even an annual extreme pogosticking world championship, called Pogopalooza.

“Sales have almost doubled each year. We have a hard time keeping them in stock,” says Brian Spencer, whose family owns the pogo-stick company Vurtego. “This is the first sport that was developed entirely on the Internet. All the top athletes met on the Internet, and it spread from there. It’s still a very young sport, but international in scope. The world record for the highest jump is 9 feet, 6 inches.”

Pogo-stick jumping is an intense, yet low-impact, cardio exercise that also works the muscles. Small jumps—6 to 8 inches—burn about 600 calories an hour, even when the hour is split up into a few minutes here and there throughout the day. Higher jumps will burn even more calories. In addition, it teaches balance and agility. While leg and arm muscles get a good anaerobic workout, most of the actual effort is produced by the core, especially the abs.

However, one of the biggest benefits for athletes is that the pogo stick is also a plyometric exercise. It builds the ability to rebound and jump, which is good for skiers, snowboarders, BMX and mountain bikers, and basketball and volleyball players.

While pogo sticks could never be called modern technology, they have been updated from the old-fashioned kind powered by a metal spring. Vurtego models are air-powered and can be inflated to the right pressure with a bicycle pump. Flybar, another American company, uses powerful rubber bands that can be added or removed to change the height of the bounce.

Adult models are usually made in several sizes so you can choose one that “fits.” The proper measurement for pogosticking is to have the handlebars reach the top of your hipbones when your feet are on the pedals and your knees slightly flexed. The device is held close to the body when bouncing, while the upper body leans very slightly over the handlebars. As you “pump” downward with your feet, the resistance bounces you up, and the resulting rhythmic jumping is almost automatic. It may take a few tries to get the hang of it, but it’s an easy movement to learn.

The only problem is finding an adult pogo stick. Big-box stores may either have models in stock, or be able to order them for customers, but their offerings are almost always childrens toys, with an upper weight limit of 140 pounds.

“Generally, the only place you can find adult pogo sticks is on the Internet,” Spencer says. Watch some of the many YouTube videos to see which kind you want to purchase.

While you may want a pogo stick just for exercise, with no intentions of jumping over cars or trying to make the Guinness Book of World Records, it can still be a hefty investment. Vurtego’s models cost nearly $400. But they’re usually guaranteed for life. Today, the devices are made from aluminum and weigh between 3 and 10 pounds, depending on the model.

However, regardless of which brand you buy, make sure to talk to an actual human at the manufacturing company before purchasing. Ensure the model you’re buying is built to handle adult weights. The height of the bounce should also be adjustable; when you first start out, you may only be comfortable with small bounces, but as you gain more experience, you’ll probably want to jump higher. Check the product’s guarantee thoroughly.

You’ll need space for bouncing, especially at first. The asphalt at a park or an indoor basketball court is a good place to use it. One of the things you’ll discover is how much attention a pogo stick gets. Strangers will come up and ask to try it; others will ask how they can purchase one.

One of the obvious benefits is the size. A pogo stick is a lot smaller than a trampoline, while giving much of the same effect. It’s also a lot smaller, and a lot more fun, than a treadmill. As you’ll find out when you try one, bouncing just makes you feel good.