FLDS Church exiles battle for the hearts and homes of the polygamous faithful.

When Jethro Barlow went to a Sunday worship service at the Fundamentalist Church of Jesus Christ of Latter Day Saints Church in Colorado City, Ariz., with some of his 19 children on Feb. 23, 2003, two fellow devout church members stopped him before he entered. After allowing his children inside, they then barred him from entry.

“I’ve been told to tell you that you are not welcome,” one of the men said to Barlow.

Barlow was among the first of what would be more than 200 men and 1,000 male youths banished by FLDS Prophet Warren Jeffs. Jeffs led the church from 2002-07 before his arrest in September 2007 on two counts of rape as an accomplice, charges for which he was subsequently convicted and is currently serving two consecutive sentences of five years-to-life in the Utah State Prison.

After being barred from the church, Barlow went home to the two-story, seven-bedroom house in Hildale, Utah, he’d built with his two wives, Joan and Shirlee, and told them what had happened. Joan started laughing, hoping it meant they could leave the FLDS community that she considered repressive.

The children were less pleased. When they left the church after the service, the congregation parted and turned their backs toward the Barlow offspring, as if they were lepers.

The news was hardly unexpected. Jethro, an accountant for 30 years who had been instrumental in building the FLDS community, had been on a Jeffs’ memo listing men in the community whose priesthood authority was in question. Without that authority, according to FLDS beliefs, he would be unable to take his wives to the celestial kingdom. “I kind of figured I had to get myself there,” Joan jokes.

Unlike most of those whom Warren Jeffs kicked out of his church and town, Jethro left the community with his two wives and most of his children—only five adult children stayed. To this day, the estrangement of those five, whom Jeffs assigned to one of Jethro’s brothers as their new father, is hard for Jethro and first wife, Joan, to discuss. A justice of the peace married Jethro and Joan in 1974, when he was 22 and she was 15.

“I don’t know if I can,” Joan says, when asked to speak about her five estranged children, trying several times before trailing into a painful, throat-thickened silence.

For two years, the Barlows struggled to find work and a new home. Then, in May 2005, Jethro Barlow was hired as a consultant to Salt Lake City-based accountant Bruce Wisan, the court-appointed special fiduciary for the United Effort Plan Trust.

The trust, with assets of more than $110 million, owns 85 percent of the land and housing built, often during Saturday work projects, by the FLDS community in the polygamous twin townships of Hildale and Colorado City. Wisan took over after UEP trustees refused to defend the trust from several lawsuits, leaving the town’s residents vulnerable to mass evictions if the lawsuits were lost.

After Wisan hired Jethro Barlow, Jethro petitioned the trust to allow his family to move back into their former home, a mostly unfurnished property that even four years later Jethro admits still doesn’t feel like a home.

Jethro and a fellow exiled FLDS member, Isaac Wyler, represent Wisan and the UEP advisory board—made up of mostly ex-FLDS members—in what they initially thought would be an effort of “rescuing a distressed trust.” In the past year and a half, however, that rescue has become a vicious fight between the trust and its former administrators—the FLDS Church—over the lives and rights of the people who live there. That fight has come to a head in what Jethro calls a test case, namely a civil-rights complaint filed by severely disabled Ron Cooke. The ex-FLDS member says his life is being put in daily jeopardy by the FLDS-staffed municipal government’s refusal to acknowledge his right to live there.

Despite what amounts to a highly wrought divorce between the FLDS and the trust, Jethro wants to build bridges, not burn them. He still lives as a polygamist and still is, as he wrote in a court document, “a staunch believer in the fundamental rights of our religious community.”

Wife Joan says, “Part of him hasn’t let go of the good old days.” It’s as if he wants to show his estranged children—along with the rank-and-file FLDS members he empathizes with—that he cares for them and is trying to help them. Bottom line: Jethro wants Hildale-Colorado City to turn into a real town. “Until I see a vibrant, local economy and happy children and young people growing up with a vision of fitting into this community, only then will I be content,” he says.

Red Sand In Your Veins
Jethro Barlow is a cautious, erudite man with a dry wit and a fierce pride in his Mormon fundamentalism and polygamous heritage. Even though he feels his is “a voice howling in the wilderness,” he has largely avoided the public limelight.

But after FLDS spokesman Willie Jessop characterized anyone associated with the UEP as, Jethro says, “enemies of the community,” a deeply offended Jethro decided to speak up. “The idea I would compromise the stability of my own children there is totally foreign,” he says.

Neither Willie Jessop nor any representative from the FLDS Church returned calls for comment made to FLDS Church attorney, Rod Parker. 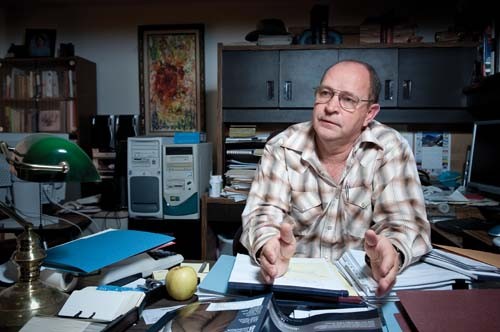 There is a profound disconnect, Jethro says, between loyally contributing FLDS Church members and those reaping the benefits. The FLDS Church leadership vilifies Wisan “and keeps everybody well-distracted from the fact that their organization cannot balance its books.”

That lack of balance comes from the FLDS Church’s current administration being what Jethro calls “a Ponzi scheme where promises are made of housing, wives and salvation that outrun their ability to deliver.” The distractions it uses include filing “dozens of vexatious, shallow, frivolous lawsuits, then going to the media to complain about the [UEP] lawyers.”

Utah Assistant Attorney General Tim Bodily estimates the trust and the church have spent more than $1 million on attorneys since May 2008—an “absolutely obscene” number. All of this could have been avoided from the get-go, he says, if the FLDS had shown up in court from Day 1 instead of waiting until the May 2008 raid on Yearning for Zion—the FLDS compound in Eldorado, Texas—to decide it wanted its townships back.

The night after the raid, many former Hildale-Colorado City residents allegedly chosen by Warren Jeffs to populate his self-proclaimed holy land returned to the Arizona-Utah strip. “The next day we began seeing Texas plates,” Isaac Wyler recalls. “They drove all night.”

But when they returned, they found the houses and land were now occupied by some of the 300 former FLDS members who had petitioned the trust for homes. The UEP had placed between 50 and 100 nonbelievers—all with personal history, financial and sweat equity invested in the building of the townships—in trust properties.

Moving to the townships can be an attractive proposition. The UEP only charges a $100 monthly occupancy fee and enforces a property tax payment. Despite the UEP- FLDS tension, many of those who have returned also cite the peaceful, small-town atmosphere as another reason.

If you have “red sands in your veins,” Jethro says, there will always be a “welcome home” from the UEP. Part of that welcome includes the UEP’s anticipation that occupants will eventually buy their discounted homes from the trust—which, if successful, would mean that Jethro Barlow is helping bring about the dissolution of the trust, which he worked so hard to build before Jeffs threw him out.

That long-term plan puts the trust in the crosshairs of a religious institution that, Bodily says, only wants true believers as neighbors.

Bodily describes the situation as “a very awkward conflict.” Choose the FLDS, and you’re endorsing their religion. If you support the trust, then you’re endorsing the secularization of a community—not, he acknowledges, that Jethro and Wyler would see it that way. “They would say they’re simply trying to empower individuals to make their choices.” Indeed, Jethro says the UEP is “attempting to bring fairness into the picture, so people who contributed to [the trust] can direct where their property goes.”

But if individual choice must defer to the communal good—as is the case with the FLDS Church—then such empowerment equates as a challenge to church authority.

Bodily says the Attorney General’s Office has to give equal weight to the interests of the FLDS and nonmember residents. However, he adds, whatever Jethro and Wyler are doing, “It’s fair to say it’s not working.”

Non-FLDS residents question Utah Attorney General Mark Shurtleff’s neutrality, citing his office’s settlement proposal to create a subdivision of 50-acre lots on the outskirts of Hildale-Colorado City for non-FLDS UEP occupants. Jethro, for one, says the proposal, which was rejected by 3rd District Court Judge Denise Lindberg, was “really disappointing.” He fears that such legal overtures only strengthen the will of the FLDS to resist the UEP.

Resident Genevive Hainline knows how resolute the FLDS can be. Her mother, Cora Lee Witt, allegedly was thrown out of her UEP home in 1981 by the FLDS Church, along with Hainline, then age 1. Now a mother of three small children herself, Hainline fought for eight months to get electricity to a rundown UEP house she’s remodeling. For several months, local FLDS cops often questioned her when she worked in her backyard. She’s also endured harassment from a neighbor who claims a garage on her lot.