FLDS Church exiles battle for the hearts and homes of the polygamous faithful.

The Informer
Jethro Barlow was born in 1952 into the equivalent of polygamous royal blood. His father, Joseph, was an ordained patriarch of the community, a town council member and leading businessman, with four wives and 60 children.

Jethro was his father’s right-hand man, working with him on dozens of family businesses. He was also deeply involved with the United Effort Plan Trust, an organization set up in 1942 to bank land donated by FLDS members, on which followers could build houses with community help and without resorting to debt.

In 1990, then-Prophet Rulon Jeffs gave Jethro his second wife, 20-year-old Shirlee Cooke. They met on a Monday and were married by Thursday. To her surprise, she says, “I fell head over heels in love.”

An FLDS insider, Jethro was increasingly horrified by the authoritarian administration of the Jeffs, Rulon and Warren. Rulon, he says, introduced elitism and began condemning entire families for having immoral bloodlines.

After Rulon had a stroke, control issues under his son Warren worsened. Shirlee found she couldn’t talk to her mother or her sisters freely anymore. “It ruined my relationship with them.” Joan’s brothers stopped talking to her, as did most of the family’s friends.

Jethro believes Warren Jeffs wanted to make an example of a senior community figure in the community. What Jethro thinks finally marked him for expulsion was telling a tax client in the summer of 2002 that terminally ill Rulon Jeffs would die soon, flatly contradicting Warren Jeffs’ preaching that his father would live forever. The client told the prophet of Jethro’s prediction, and Jeffs scolded Jethro.

After Rulon Jeffs died in September 2002, Jethro could not get an audience with Warren, the new prophet. In January 2003, the list of questioned members went around the community, and a month later, as Isaac Wyler puts it, Jethro, along with Canadian FLDS leader Winston Blackmore, were “publicly executed.” 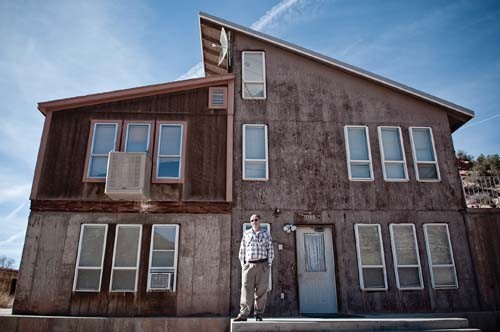 Jethro says his banishment forced him to walk away from $1 million in equity. He handed over the keys to his home, a day-care center with 120 students and 25 employees, the Mark Twain restaurant, industrial and office buildings and his accounting business. Jethro currently is working under a provisional accounting license, having been caught up in a Security Exchange Commission investigation of a company he sold to Salt Lake City-based investors.

Before Jethro closed up shop, clients picked up their tax returns. “People couldn’t get over it,” Joan recalls. “It was like having a funeral before you died.”

Jethro’s biggest loss was his father. He went from being Dad to someone trying as hard as he could to conform to Jeffs’ newly approved gospel, which meant forsaking his son. “I never had a conversation with him that wasn’t scripted from that day on,” Jethro says. “I never felt our souls touching in communication, as we had for so many years before.”

Jethro’s expulsion, Joan says, “sent him into a slump so deep and dark it scared me.” Jethro admits, “I still haven’t got over it. I was the most steeped and hard-boiled [in the FLDS culture]. I was born into it.”


The wives did not share the frustrations of their husband, however. Joan welcomed the escape, and when Jethro and Shirlee drove out of the town, Shirlee screamed, at the top of her lungs, “Freeeee-dom!” They moved to Holbrook, Ariz., the first of seven rental moves, where the children attended a school with African- American and American Indian students. When Jethro went to a parent-teacher conference, he struggled to explain his having two boys that were six months apart. They hid their polygamy as best they could, Jethro taking Joan regularly to a Chinese restaurant, while his dinner dates with Shirlee were at a Pizza Hut.

When Wisan came knocking two years later, Jethro was grateful for a job. At first, he thought FLDS residents would see the new trust management as bringing relief. But Warren Jeffs, even as a fugitive from the law, politically outmaneuvered them by instructing his flock to “do nothing, say nothing.”

That included not paying property taxes in 2006. When the trust’s Wyler knocked on doors for information about who lived there, the silent treatment was, Jethro says, “an effective way to limit the fiduciary’s ability to function.”

Rejected by the Lord
Spend only a few hours with Wyler, Jethro’s point man, on the townships’ mostly unpaved streets, and you come face-to-face with FLDS resistance to the UEP.

As dusk settles on Colorado City one late October afternoon, silence reigns, broken only by a cow’s lowing and the rap of Wyler’s right hand against a trailer’s front door.

“I think even my knuckles have calluses on them,” the horse-farm owner says with a booming laugh.

He raps out a three-knock coda, repeats it twice more. There’s no answer, so he tapes a delinquent tax notice to the door.

For the past couple of years, Andrew Chatwin has videotaped Wyler’s every move each time he’s stepped on one of the UEP’s 800 properties, 600 of which FLDS members live in. “They’ve accused him of everything— of trying to run over old ladies, breaking into houses, vandalism,” Chatwin says.

“How do you get that kind of hatred installed in a kid that young?” ISAAC WYLER wonders. “That takes some serious brainwashing.”

In July 2009, Wyler was convicted of criminal trespass by a Mocassin, Ariz., justice court judge, and sentenced to two years probation and fined $400. The sentence is being appealed, but after Wyler’s conviction, Colorado City charged Jethro and Wisan with related crimes.

Wyler parks his truck by a large, woodfronted house. It had been vacant for six years, he says, as he fishes out a key from a plastic jar full of keys. When he entered the property for the first time, he found cats and pigeons. He changed the locks, and a couple who signed an occupancy agreement moved in. Even though they found the remodeling project too big and moved out, their possessions were still supposed to be there and the occupancy agreement was still in effect. Wyler, however, heard a rumor that the FLDS family who once lived there had changed the locks and “threw [the UEP-approved couple’s] stuff away.” He was checking to see if this was true.

While Wyler waits for the local police he’s requested to witness his investigation, a dark-blue SUV parks close to Wyler’s truck. The driver, Penny Barlow—not directly related to Jethro Barlow—remains in the car, studiously ignoring Wyler and Chatwin as she talks on her cell phone. It was she and her husband, Chatwin says, who allegedly moved in the week prior without permission of the courts or the fiduciary.

When a Colorado City police truck arrives, Penny Barlow, a slender woman in an anklelength purple dress, her hair swept back in a wave, gets out. As everyone watches, Wyler tries his key. It doesn’t work. Wyler believes Penny Barlow has changed the locks.

Penny Barlow started building the house in 1991 with her husband. She says that the FLDS Church gave them “the land to improve upon it. We put in the footings, the building, everything here that you see.” When they needed a larger place, they moved up the road. Now, in addition to their current home, the FLDS Church—in what Wyler considers an obstructionist move—is directing Penny and her husband to reclaim their old house.

Asked how long the house has been empty, she smirks and says, “It’s a matter of debate.”

Wyler says six years. “You can do the math as good as I can,” she replies curtly.

Penny Barlow did not go to Texas, she says. Wyler chips in, “She’s one of the ones who got rejected by the Lord,” referring to recorded statements by Warren Jeffs that those not invited to Texas were disowned by God. Penny Barlow appears startled, accusing Wyler of getting the information from “illegally obtained records.” Finally, she says, “I don’t feel very rejected, actually.”

The UEP trust had been taken from her church after “false accusations were made,” she says. Under Wisan, she sees its assets being dissipated “and our just wants and needs are having a very hard time being met.” The land and its harvests “have been basically stolen from us.”

Private ownership of the land, as envisioned by the UEP, she says, is “not the way we were understood to settle here.” Her cell phone rings, she answers it, and then she politely asks the UEP men and the reporter to leave. Boys dressed as cowboys, several on miniature ponies, watch from the corner. One of them suddenly gallops over as Wyler backs out onto the street. He stares at the truck’s occupants as he circles behind it—as if challenging the UEP employees—or driving them out. It’s a grinding glare that Wyler’s gotten used to.

“How do you get that kind of hatred installed in a kid that young?” he wonders. “That takes some serious brainwashing.”

“What right does she have to come and get that second house without permission and drive the people who were there out?” he asks. And while Penny Barlow cried foul about FLDS members discovering their home locks were changed by the trust while they were at work, the reality, in this case, Wyler says, is the opposite.