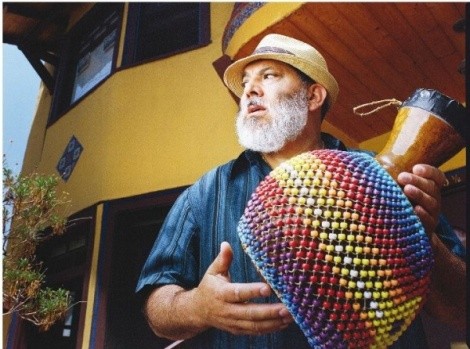 The elder statesman of Latin-jazz, conguero Poncho Sanchez, has been spending more time at his Los Angeles-area home recently, teaching himself how to relax again. “I’ve been touring worldwide nonstop for all of 40 years, man,” Sanchez says. “We were constantly traveling. I got used to that lifestyle. We were hot, man. But, I’ve been enjoying the last half-year—staying home is real nice.”

With a down economy, there are fewer shows and, subsequently, more house parties. Sanchez said he had just finished cleaning his front yard, the aftermath of his grandson and granddaughter’s baptism party. “Now, it’s ready for another party,” Sanchez laughs, showing that this 58-year-old Mexican-American musician hasn’t slowed down a bit.

Aside from slang like “those cats,” “ya dig,” and “jive on that,” Sanchez is timeless, just like his hand-slapped beats and syncopated rhythms—the backbone of Latin jazz. He’s traveled the world, graced stages and studios with nearly all of his heroes and has endless stories about it all. A consummate storyteller, Sanchez relates tales over the course of an hour ranging from his time playing with Dizzy Gillespie to recording with Ray Charles—his Charles impersonation is hilarious—to performing at Mexican beach resort jazz festivals. At some point in every story, simply and humbly, he repeats, “Wow, man. I was like, ‘Pinch me. Am I dreaming?’ ”

That big-eyed view of the world—and lots of elbow grease—has helped Sanchez reach the top of the Latin-jazz heap. “It’s taken a lot of hard work. You don’t just blow up all of a sudden. Well, maybe if you’re a pop act, but not in jazz. Hell no,” Sanchez says. Over his long career, he’s used every crayon in the jazz coloring box—an approach that results in an aural psychedelic Latin-American fiesta. He’s dipped into soul, funk and Latino grooves, but for his 24th album, 2009’s Psychedelic Blues, he’s shaken up a musical martini of straight-up, no-frills jazz—a throwback to the ’60s and an homage to his heroes, but with a twist of his signature Latin lime. The CD begins with Herbie Hancock’s “Cantaloupe Island.” Smack in the middle, there’s a medley of Afro-Cuban jazz percussionist Willie Bobo tunes; one, “Fried Neckbones and Some Homefries,” is as delicious as it sounds. Then, aided by Arturo Sandoval, comes Freddie Hubbard’s “Crisis” chacha-cha-ified, and Horace Silver’s swing tune “Silver’s Serenade” turned into a mambo.

In concert, the band plays these tunes as part of a wider assortment; Sanchez draws from a repertoire of more than 200 songs. With Sanchez front and center, their onstage demeanor is classy and dignified, yet high-energy—never stuffy. This is feel-good music, for sure. Sanchez remembers bringing this vibe to Zion on several occasions, including his first trip, in 1975. And, about five years ago, Sanchez had the option to play in tropical Bermuda or Salt Lake City for a New Year’s Eve show, and chose Salt Lake City. “We left from southern California and got off the plane and there was like three feet of slush on the ground. And I said, ‘Uh-oh! Am I dreamin’?’ ” Sanchez says, laughing, “Naw, man. Utah’s cool. I dig it.”

Sanchez’s is the final concert of the 16th season of the GAM Foundation’s JazzSLC series; other performances this year included Dianne Reeves and Chick Corea. GAM Foundation founder Gordon Hanks, discussing the series, says, “The impetus was to expose college, high school and junior high jazz students to live jazz; young people just weren’t being exposed.” GAM donates 200 tickets to more than 45 local schools for each concert. Hanks believes he’s made a community-wide impact and says former students still thank him for the experience.

The GAM Foundation almost went under seven years ago and continues to struggle, but, Hanks says, the all-volunteer organization is pretty resilient, and donors always help the organization survive financially. This season, Hanks says, “We covered the broad spectrum. Jazz is such a big tent, you can have all sorts of bands.” Hanks booked Sanchez because of his band’s contagious, carefree zest for life and music; everyone—players and patrons—leaves the show feeling good. “It’s great dealing with jazz artists. You don’t run into divas,” Hanks says. Sanchez, a diva? He’d probably say, “Wow. Pinch me, I must be dreamin’.”