Sophie Blair explores her mental health and her expansive musical talents on flatline. 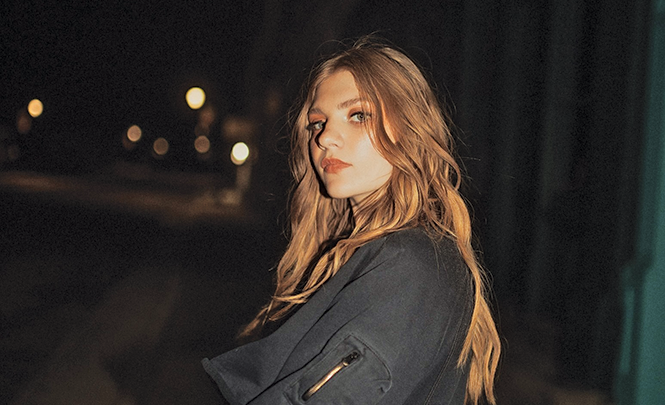 Before Sophie Blair was a pop star, the Utah County-based pop artist was walking a fairly straight line—towards a career in classical music. Then, in 2020, her debut EP Arteries blazed into the world. Far removed from anything she'd done before, it was rich in the essence of pure pop—catchy hooks all over, bleeding emotion. Behind the scenes, Blair's pivot to pop really is like the best of pop music—easy on the ears, emotionally cathartic and a total product of practice, patience and perseverance.

"I was probably 19, and I had a boyfriend at the time who said something like, 'The best musicians are the ones who are writing pop songs,'" says Blair. A lifelong Taylor Swift fan, she was receptive to this bold statement. "I don't actually know if that's true—it's probably not—but I'm a very ambitious person and that kind of got in my head a little bit. So I started studying pop music like I had studied classical music in college for about a year, before I dropped out. I was planning to be a violist in a symphony and gigging as a string player, so I was doing a lot of stuff that was using my viola ... and I got this little itch. I started researching pop songwriting and songwriters."

She began to wonder, could she do this too, and do it well? She began practicing hooks, with the intention of making the best pop music she could. "Obviously I haven't done [that]," she admits. "But I started putting my energy towards that. I also realized that this niche of music is saturated with a lot of meaningless shit, actually."

That statement hardly needs explaining, because much pop music has a reputation for lacking depth. Blair's pop experiments aren't, though. Her lyrics draw from places of struggle that are almost primed for pop, a genre that often fixates on heartache and pain.

Blair says, "I have a diagnosis, Borderline [Personality Disorder], and a lot of Arteries is about my experiences with that. There's an obsession with a favorite person where you make these really serious attachments and have these severe fears of abandonment," she adds, quoting her lyrics, "I love you so much my body might break" as an example of physically feeling that fear.

Other songs, like "Drive," grapple with the issue of suicide, both involving a loved one and her own past attempt. "It's being a teenager and in your early 20s—which is where I'm at—and really loving someone through the lens of this severe, heavy mental illness." She cites one of her favorite songs, the über-catchy single "Don't Be Like That!," as an example of an unhealthy attachment she's had. "Listening back, there's definitely this theme of, 'I'm in love, but it's not happy, this is actually very painful.'"

But, she says, her life has always been like that, and pop has become a positive new mental space. "Sometimes when I'm writing my Phoebe Bridgers-type folk songs, I'm too deep into the deep feelings," she says. "It almost feels like I'm taking it all too seriously. Within the pop landscape, it felt like I was making fun of myself a little and it didn't feel as heavy. [Pop] made it feel like, 'Eh, this is just how my life is.' I think it was healing for me, actually."

On her June 2021-released EP, flatline, she realized her illness doesn't have to isolate her or make her unrelatable. "There's a little more leaning into the exciting part of being a little bit mentally ill, and being really in love," she says.

And while Arteries and flatline were recorded together a year-and-a-half ago with producer Nate Pyfer (Kaskade, Fictionist), Blair notes that flatline reflects the confidence she found towards the last half of recording. She was initially timid in the new environment of professional recording, but it didn't take long for her big personality to meet the prolific Pyfer's, and in a stressful moment, she remembers asserting, "I need you to fucking listen to me!" There was a shift, and the two fell into harmony.

"When our energy was good, it was crazy, we'd both be like manically pacing around at midnight, 1 a.m. It pushed me a lot, and taught me a lot, but we also had a lot of fun. When we made 'Close Quarters,' we were both like, sobbing," she says, citing the slow burn that closes out flatline.

With these two sparkly pop debuts under her belt, what's next? "I don't like to be held down, and I can see myself evolving in lots of other ways," Blair says. "I write every single day. So I have albums of songs that are done—obviously not all of them I want to release."

But what she will release will remain in the pop realm, though she's also eyeing the "perfect country song" question. "I'm still in the process of figuring out exactly what I want to be as a musician. For me, it's been me trying to dunk on myself over and over and over again. 'You did this, now can you do this?'"

The answer to that question seems clear. Catch her at Kilby Court on Friday, Aug 6 and keep up with her on Instagram at @sophiexblair.