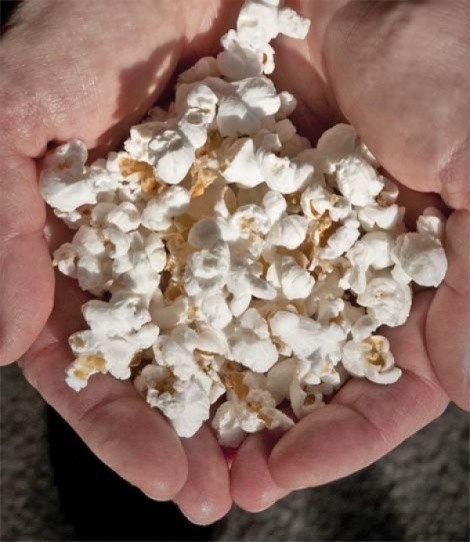 We’re talking popcorn—something near and dear to my heart. But it’s not just me. The New York Times deemed the ultimate cheap treat worthy of an online “popcorn symposium” a couple of years ago, and a recent blog post by cookbook author Michael Ruhlman (The Making of a Chef) stirred my popcorn passion when he wrote, “For a while, my young son kept asking me for ‘pop popcorn.’ James, I said, why do you call it pop popcorn? He said, ‘No, pot popcorn. Popcorn that you cook in a pot.’ I’m sad we need to distinguish between the two. There is popcorn, and then there is the microwaved stuff, coated in grease and powdered flavorings, that only resembles popcorn and is favored by the young and the lazy.” Amen, brother.

Ruhlman’s post awakened me to the fact that my old method of putting three kernels in and waiting for the oil to heat and pop them before you add the rest is just ... poppycock. The process is as fast as a microwave if you just put all the kernels (one cup popcorn to three tablespoons oil) in the pot all at once. Cover, turn the heat up and shake.

Another tip gleaned from the popcorn symposium is to add the salt before the corn is popped so that it sticks to the kernels instead of sinking to the bottom of the bowl. For the record, I’m partial to hot Hungarian paprika, salt and melted butter. How about you?