Plus: Todd Margaret, House of Lies 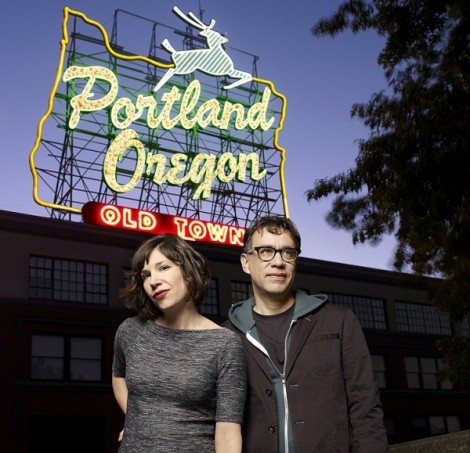 Season Premiere: The former Independent Film Channel is rebranding itself as a hipster destination point and, fittingly ironic, the hipster-skewering Portlandia has become its flagship series … get it? More so than most series, Fred Armisen and Carrie Brownstein’s cult hit of 2011 plays as well broken into pieces over the Internet as it does as a half-hour TV show; Season 2’s take on not-just-Portland-relatable topics like an outbreak of DJs and Battlestar Galactica obsession are funny no matter what the context. Hell, even Eddie Vedder shows up and nails a punch line—it’s a comedy miracle.

Season Premiere: Unlike Portlandia, companion comedy The Increasingly Poor Decisions of Todd Margaret seemed like a goner from its first episode last year: Corporate drone Todd Margaret (David Cross) is dispatched overseas by his shady company (headed by fellow Arrested Development alum Will Arnett) to market a possibly toxic Korean energy drink (Thunder Muscle: “It will give you the strength of 20 ponies!”) in London. As the title implies, everything goes wrong, in a very dry, very British fashion. The trend continues in Season 2 and, adding to the unlikelihood pile, Jon Hamm (Mad Men had some downtime, apparently) joins the cast.

Shameless
Sunday, Jan. 8 (Showtime)
Season Premiere: When last we left the destitute Gallagher clan, Fiona (Emmy Rossum) was on the verge of fleeing to Costa Rica with her car-thief boyfriend after springing brothers Lip (Jeremy White) and Ian (Cameron Monaghan) from jail, and perpetually plastered patriarch Frank (William H. Macy) was on the lam after his blackout sexual encounter with his married girlfriend’s teenage daughter hit YouTube; as summer-set Season 2 opens, Frank loses baby Liam (whom he was using for panhandling sympathy) in a bar bet—meet America’s new favorite TV family! How Shameless wrings laughs, empathy and even the occasional economics lesson from such dire situations is masterful—and Rossum’s frequent nudity doesn’t hurt, either.

House of Lies
Sunday, Jan. 8 (Showtime)
Series Debut: Speaking of unlikable characters, a series about management consultants hired to put positive PR spin on the corporate 1 percent? The timing, not to mention contrast with Shameless, is either terrible or brilliant. Stars Don Cheadle, Kristen Bell and Ben Schwartz (Jean-Ralphio! From Parks & Recreation!) work like hell to sell it, but House of Lies is too cynical for even The Only TV Column That Matters™(!), and Cheadle freezing the action every other minute to address the camera and explain biz jargon is just as annoying as it sounds. As Bell’s character says at one point in the pilot, “I’d rather work at Arby’s.”

Californication
Sunday, Jan. 8 (Showtime)
Season Premiere: Where to go after what played as a Series Finale last year, with Hank Moody (David Duchovny) returning to New York, even if it was without his One True Love, Karen (Natascha McElhone)? Back to California, natch, if only to escape his latest pissed-off girlfriend (Justified’s Natalie Zea) in Manhattan. Also, Hank’s been lured back by a lucrative offer to write the screenplay for hip-hop mogul Samurai Apocalypse’s (played by Wu-Tang Clan’s RZA) film debut, Santa Monica Cop (“It ain’t like Beverly Hills Cop—it’s in Santa Monica, bitch!”). Apart from the Californication staples of sex, drugs, sex and drugs, Season 5 serves up new glimpses of the Hank/Karen saga’s past, as well as hope for the star-crossed couple’s future. And yes, even more naked Runkle (Evan Handler). Sorry.