Food-related memories from the festival 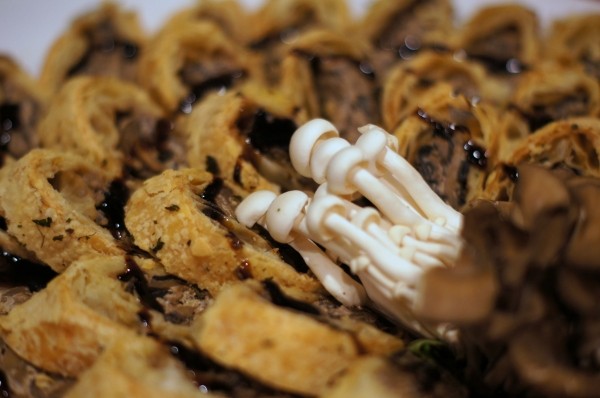 Being primarily a food and wine writer, I don’t get to rub elbows with many A-list celebs during the Sundance Film Festival, or get invited to the exclusive parties that, say, our movie critic, Scott Renshaw, does. But I’m not totally locked out, either. There are enough culinary events on the periphery of the festival to keep even a food writer like me busy. So, here are a handful of highlights from this year’s culinary soirees, from a foodie’s perspective: postcards from Sundance, if you will.

I have to admit to getting a little kick out of exiting a big, black limo on Main Street in Park City and watching curious onlookers trying to determine if I was somebody “important” or not. Normally, a stretch Hummer isn’t my chosen mode of transportation—you know, just a tad gaudy. But, a ride is a ride. And that happened to be my ride to one of the ChefDance dinners at this year’s Sundance Film Festival. Folks were lined up on the sidewalk on the lookout for Dave Grohl and fellow Foo Fighters; instead, they got me.

Each year, ChefDance is a “pop-up” restaurant experience where celebrity chefs and guests mingle over five evenings of gourmet, invitation-only dinners. The one I attended featured Whitney Miller, a young Mississippi native who, at age 21, won Fox’s first-ever MasterChef contest. Nicholas & Company sponsored the ChefDance kitchen and supplied an army of very talented chefs and cooks (not to mention the food for well over a thousand guests) to assist the celebrity chefs.

Kenny Loggins, who played at that evening’s dinner, looks and sounds great, by the way. And so does an actor named Joey Plewa, who we wound up chatting with during dinner. You might remember him as a terrorist in the original Die Hard. Super nice guy, it turns out (not terrifying at all), as was Kenny. Meanwhile, we enjoyed boutique cocktails made by San Diego’s Snake Oil Cocktail Co., along with Miller’s menu, the highlight of which was melt-in-the-mouth braised beef roast with whipped turnips, roasted baby carrots and cipollini onions, turnip green “pesto” and caramelized-onion & red-wine jus.

One of my favorite food movies is Big Night, the premiere of which I attended during the 1996 Sundance Film Festival. So, I was thrilled to accept an invitation to be part of a re-creation of the Big Night menu at the Promontory Club during this year’s Sundance Festival. Promontory is an exclusive golf community located about five miles east of Park City, and Promontory’s chef du cuisine, Bill Reilly, knocked it out of the park with his timpano, the timpani-shaped pasta dish that was the highlight of both Big Night and our Promontory luncheon. It was multiple layers of ziti pasta with tomato sauce, hard-boiled eggs, meatballs and cheeses, all wrapped in a beautifully browned, rustic baked shell the size of a drum. Served in addition to Reilly’s amazing timpano was red, green and white (the colors of the Italian flag) seafood risotto with prawns and scallops; eggplant caponata; grilled white asparagus with roasted tomatoes; tender, juicy herb-roasted chicken; truffled burrata; grilled winter endive; artisan cheeses and charcuterie; and much more.

Along with the sensational Big Night menu at Promontory, we had the privilege of sipping Continuum 2009, a young but luscious blend of Cabernet Sauvignon, Cabernet Franc, Petit Verdot and Merlot. Continuum was founded in 2005 by Robert, Marcia and Tim Mondavi, and Carlo, Tim’s son, was in attendance at Promontory’s Big Night lunch. I’ve had the pleasure of meeting Carlo a number of times, and I’m always struck by what a down-to-earth, grounded, really nice guy he is. And, it doesn’t suck to drink his wine, either. At $150 a bottle, it’s not something I get to do very often. Oh, in case you were wondering: Louis Prima didn’t show up for this Big Night (or, big afternoon), either.

For many years, Susan Feniger has been one of my favorite chefs, along with her longtime business partner, Mary Sue Milliken. Together, they were television’s Too Hot Tamales and are the owners/chefs of CITY Restaurant in Los Angeles, along with their Border Grill restaurants in Santa Monica, Calif., downtown Los Angeles and Las Vegas. Personally, I’ve been enjoying meals at the Las Vegas Border Grill since it opened some 15 years ago at Mandalay Bay. More recently, Border Grill Downtown opened in Los Angeles, as did the Border Grill Taco Truck and a solo venture for Feniger: STREET, located in Hollywood. Numerous TV shows, five cookbooks and lots of charitable work (Feniger serves on the boards of the Scleroderma Research Foundation and the L.A. Gay & Lesbian Center) helped Feniger to be named the Sundance Film Festival’s 2013 Celebrity Chef. I was lucky to be able to attend a reception in her honor, hosted by Cuisine Unlimited Catering & Special Events at Abravanel Hall during the festival.

When I spoke to Feniger, she’d been cooking in Maxine Turner’s Park City kitchen. Turner is the owner/president of Cuisine Unlimited Catering and a friend of Feniger’s, who’d been working with Turner’s team to prep the menu for an exclusive filmmakers’ dinner during Sundance. Remarking on the welcome change of climate from her Southern California digs, Feniger said with exuberance, “I love it here!” She genuinely appreciated her invitation to participate in the 2013 Sundance Film Festival. And you know what? So did I.