A big blackout provides a reminder of the connections between music, electricity and climate. 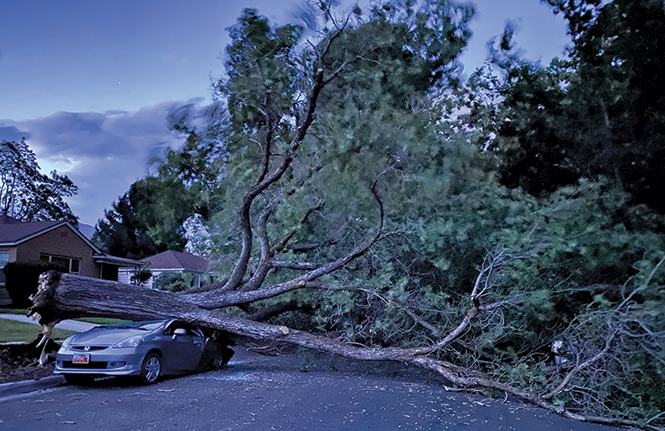 Last week, I hiked through a smoke-filled canyon in Wyoming. The next day, in Salt Lake City, a bizarre Eastern windstorm swept down the mountains, violently felling many trees and disrupting power. In Denver, fires and high-90s temps were replaced with snowy winter weather during the same timeframe. Through our own catastrophe, I couldn't even check my phone, or play music loud enough to block out the sounds of the angry wind.

As a millennial, climate change has been on my mind since the first time PBS started putting up environmentally-conscious info-bytes between the children's shows I watched while young; I think I've been making peace with the changing world since then. The Sept. 8 windstorm has yet to be pinned as a symptom of climate change as of this writing, but the blackout made me consider how volatile new weather events impact everyday facts of modern living. Internet access has made art and music accessible for anyone to make or listen to over most of the past three decades; new genres and even new instruments have been made thanks to reliable electricity. As I began writing this in a dark room filled with candles on the day of the blackout, I started to wonder if music could keep being as accessible as it has been in these recent decades of modern life.

In a scene from the movie Marie Antoinette, the pampered young title character lounges in an airy room filled with the gentle sounds of her own personal band of French minstrels. Marie Antoinette, in that film, is a lover of music—in another scene, she claps with fervor at the opera, waking up her stuffy courtesans. The young queen had, of course, no access to the kinds of synths and electric guitars that fill out the soundtrack of the film about her, which features The Cure, New Order and The Radio Department. She lives in a world that is instead filled out with the acoustics of the time, even though pastoral scenes of her wandering through grasses on the swaths of land she owns are dubbed over with the glitched-out piano meanderings of Aphex Twin.

If today's world lost access to technology, a rich few modern Marie Antoinettes would still be able to commission artists to play acoustic private sessions for them. But the music that has always been the most real and important to me—which I found by way of the internet, and which is the reason I do the music-centric work I do—would be inaccessible to me.

Power outages always make you realize how many ordinary things you take for granted, like grinding your coffee beans in an electric grinder, or glancing at your weather app whenever the wind changes. It made me pace around my apartment wishing I had a fucking gramaphone. What I wanted was what I always want every single day, especially when I'm stressed—loud music. But it wasn't long that I'd been camped at my boyfriend's house to use his power that a whooshing sound swept through the neighborhood, followed by a roar and the loss of light, power and internet access.

My boyfriend's vinyl collection—filled with stuff I mostly like, plus some elder-Millennial punk and a lot of jazz—sat useless in front of me, his record player a plastic nothing. My Bandcamp library? Uselessly reliant on the internet. iTunes? The only cool thing there is a bunch of Cure albums I made my best friend illegally download for me in high school, because her family didn't care about or acknowledge internet security risks. It's otherwise full of emo boy bands from the year 2007 and really bad indie from just a few years later, all of which I've tried to delete many times but which seem to have some kind of ghostly connection to my Apple account. CD players must be plugged in, along with tape players, MP3 files need a laptop that has battery life, even a rudimentary Walkman needs batteries. Every way to listen to pre-recorded music calls for an electric charge—or, all signs point to sitting in your car.

After a few hours spent in silence, I drove back to my apartment to get some perishables to store in the boyfriend's cooler. Out on the road, my cell phone data kicked back to life. I cranked up the tender but thrashing garage album by the Memphis-based Bully, Sugaregg. My anxiety eased even as I drove around fallen trees in the road, but rushed back as I realized that I'd only been able to finally enjoy music because of some fragile LTE and the power given me by my car's battery, fueled by a fossil fuel.

What if, like our new wet springs and strangely dry winters, hurricane force Eastern winds start to blow frequently off our mountains, zapping electricity? Private listening aside, even in the case of a live performance, an electric guitar or keyboard needs a plug that's got charge. There are many important and potentially grave consequences of climate change, and the loss of accessible music probably doesn't seem like a big deal. But as I let Bully's electric guitars soundtrack the calm evening after the storm, I did feel a tickle of dread: In a climate-compromised world, music as we know it might suffer just as much as those of us who love it.