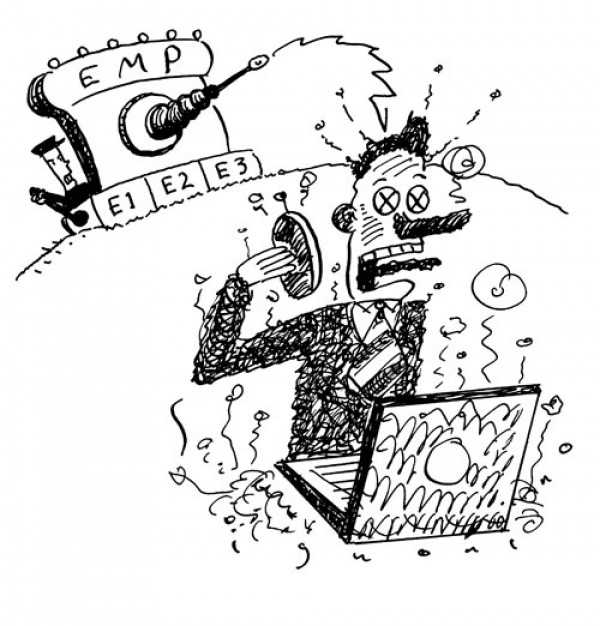 Is it true an electromagnetic pulse (EMP) would stop cars and trucks, and they would not run until fixed? Would our stores be empty of food because trucks could not move food to them? Would water to our homes stop flowing because of EMP damage to electrical equipment? Why don’t we hear more about this? —Mark Terry, Honolulu

What do you mean, why don’t we hear more? We’ve heard plenty. We have, for starters, been apprised of the EMP menace in a prescient 1993 column by (ahem) me. Admittedly I was suggesting EMP as a way of silencing obnoxious car stereos, which some may feel indicated a nonserious attitude toward the subject. This has left the heavy lifting in the EMP panic department to the likes of Newt Gingrich. Let me make up for that as best I can now. EMP could be, in theory, really bad.

Although EMP was understood in a general way back in Manhattan Project days, its potentially devastating impact didn’t sink in until 1962, when the Starfish Prime atomic test over the Pacific unexpectedly wreaked electromagnetic havoc in Honolulu, 900 miles away. Hundreds of streetlights were knocked out, burglar alarms went off all over and inter-island phone service was disrupted. Whoa, said startled scientists, atom bombs are worse than we thought.

The electromagnetic energy generated by a nuclear detonation actually consists of three distinct pulses. The first, called E1, attacks solid-state electronics such as computers, cell phones and televisions. The second pulse, E2, is similar to a lightning strike and can be stopped by surge protection, provided said protection wasn’t destroyed by the E1 pulse. The E3 pulse, perhaps the most insidious, is a slow, long-duration surge that attacks power transmission lines and other electrical infrastructure.

Scary, but why are people freaking out about EMP now? The first reason is that although the end of the Cold War has reduced the odds of a nuclear holocaust, the proliferation of atom-bomb technology has increased the chances of other types of nuclear attack. An adroitly targeted EMP assault could cripple a country’s high technology while not directly killing anyone, reducing the likelihood of nuclear retaliation. In 1999, members of the Russian Duma, upset over NATO bombings in Yugoslavia, hinted about an EMP attack in response.

Currently, eight countries besides the United States could unleash a nuclear EMP assault, and 10 others may be able to swing it soon. Nobody would put such a thing past the loose cannons running North Korea (which apparently has the bomb) and Iran (which apparently doesn’t yet). This led Newt “Mine the Moon” Gingrich to raise the specter of EMP doomsday during his recent presidential campaign.

The second reason for renewed fear of EMP is that we’re becoming increasingly dependent on fragile electronics. Back in 1993, the Web barely existed, smartphones were unknown and it wasn’t unheard of to find vacuum tubes and nonelectronic controls at power plants and industrial facilities. Today, there’s vulnerable circuitry in just about everything. (OK, not barbecue grills. Barbecue grills are a rock.)

Predictably, this fact has inspired apocalyptic scenarios: Imagine if every computer and embedded microchip east of the Mississippi stopped working! Maybe we’re not exactly back to stone knives and bearskins, but you might want to dust off the typewriter. And prepare to put some serious time in on that bike—critical automotive electronics could indeed be fried.

Recognizing the situation, Congress established a commission to assess the EMP threat. In 2008, the commission reported that a couple small nuclear devices exploded in the right places could shut down 70 percent or more of the U.S. power system. Fixing it could take a while—some components, such as very-high-voltage transformers, can’t be produced quickly. Our natural-gas infrastructure would likely also be knocked out, and much of our telecommunications capability would be destroyed. If I were at 30,000 feet in a fly-by-wire civilian aircraft at the time of the attack, let’s just say I’d be concerned.

Defending against an EMP would be costly. You’d need lots of spare parts and low-tech backup systems, plus shielding of key elements. It’s doable, but even the U.S. military hasn’t made much progress.

Scoffers, of whom your columnist is habitually one, may be inclined to dismiss EMP as another faddish concern of professional worrywarts. (Remember biological warfare?) A successful assault would require mastery of multiple complex technologies, and North Korea, for one, has been having a helluva time just getting rockets to work.

However, the real danger may not originate in Pyongyang or Tehran, but in that bundle of uncontrollable energy overhead. Every so often, the sun unleashes geomagnetic storms powerful enough to destroy transformers and cause blackouts. The 1859 Carrington solar storm, the strongest ever recorded, was so powerful that sparks from the currents induced in telegraph wires set telegraph paper on fire. If a storm like that were to happen in the age of the iPad, why, in the twinkling of an eye our entire civilization might be shut down.