While state funds for domestic violence dwindle, the cost in lives climbs

Five years into their marriage, Debbie Mayo found out that her husband, Chad, had been having an affair. In the wake of the revelation, her young husband—they'd married as teenagers—became "an angry, crying mess," Mayo says, though before that moment, she'd seen him cry only twice.

At first, she says, her "heart just wrenched," but his tears soon escalated to threats of suicide, and then violence.

He grabbed her arms so hard he left bruises before throwing her on the bed, gripping her face in his hand and squeezing as she screamed.

On Feb. 9, 1998, he went to their West Jordan apartment and asked her to take him back. When she refused, he pulled a gun from his waistband and told her to call the police. She stayed with Chad as a SWAT team deployed outside, finally leaving after he told her he would follow in five minutes. Shortly after, the 22-year-old shot himself in the head.

Domestic violence rears its head rarely in the public arena, perhaps when a NFL football player knocks out his wife in an elevator, or a Spanish Fork policeman kills his family and himself.

But domestic violence is a quiet plague in Utah. Between 2009 and 2011, more people were killed in domestic-violence-related issues than other types of homicides. According to 2010 figures from the Centers for Disease Control & Prevention, one in three Utah women will face rape, physical violence and/or stalking by an intimate partner in their lifetime, and once every 33 days, on average, there is one death related to intimate-partner violence.

These deaths are often the culmination of long-time violence that, in many cases, goes unreported.

When it is reported, victims face a fractured, overburdened system made up of law enforcement, shelters, justice courts and treatment providers. And advocates say that anyone who looks at this system will see that change is sorely needed.

Police officers need more training, and shelters are always full; last year they served as many people, approximately 3,000, as they turned away. The courts struggle to hold perpetrators accountable—a process partially undermined, some say, by the ineffectiveness of offender treatment, which neither is standardized nor has much oversight. 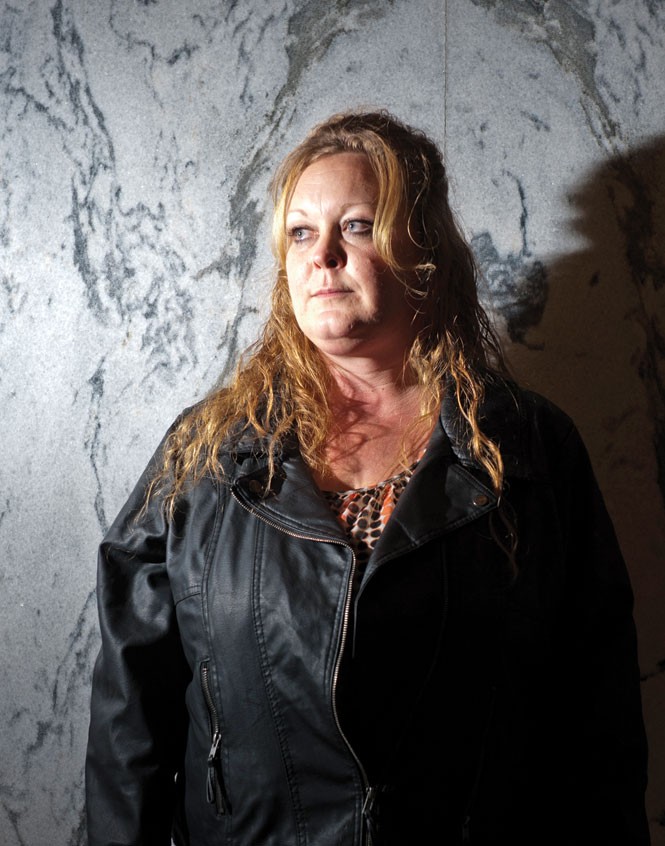 Mayo is intimately familiar with the nature of domestic violence and its far-reaching consequences. Her next long-term relationship after Chad's death was verbally abusive. "I've always been better at helping other people than helping myself," says Mayo, who now runs a domestic-violence shelter in Richfield and is the chairwoman of the Utah Domestic Violence Coalition board, which represents the interests of shelters.

Since October 2010, there have been seven domestic-violence-related homicides in Sevier County and Sanpete County alone, two of which were murder-suicides. Mayo can recall only one prior to that.

And the growing demand for New Horizons' services has outstripped its resources. In 2014, for the first time, the shelter had to turn people away because it was full.

New Horizons serves just a small slice of the state's population, but its experiences are a microcosm of a much wider trend: Domestic violence in Utah is escalating, and outpacing the funds and support available to its victims, which has only decreased in recent years.

According to documents obtained by City Weekly through a records request, the Division of Child & Family Services in 2014 had a domestic-violence budget of $2.21 million, down from $3.53 million in 2011.

Yet 2014 saw a five-year peak in domestic-violence-related deaths, with, according to provisional figures from the Department of Health, 29 women, men and children losing their lives to domestic violence.

On a cold, windy Monday night in late December, West Valley City Police Department Detective Justin Boardman races in an unmarked car to a "domestic," to show a City Weekly reporter the realities of police encounters with domestic-violence scenes. Utah defines domestic violence as both intimate-partner violence and cohabitant violence between, for example, a father and a son.

As darkness falls, domestic-violence calls to dispatch pop up repeatedly on Boardman's police computer. He stops at one family-related domestic-violence call, and another—for the apartment building behind it—appears on the on-call screen. "That's more like the West Valley I know," he says cheerily.

On one poorly lit street with a reputation for drug crimes and shootings, officers have been called to a protective-order violation. A 26-year-old man has refused to leave the apartment of his 22-year-old ex-girlfriend, who got the protective order against him earlier that day. She's also nine months pregnant with his child.

The man had entered her apartment with his current girlfriend and refused to leave. After he verbally abused his ex, she and her 2-year-old daughter—also his child—went and sat in her car, and she called the police.

The police remove the man and his girlfriend. An officer tells the ex-girlfriend that she has to go to court Jan. 6, 2015, to make the protective order permanent, but she says she plans to drop it.

Once the immediate crisis has passed, "unfortunately, the majority of our victims recant, they want it to go away, they want it dismissed," says Rachelle Hill, victim advocate at West Valley City Police Department, which sees 4,000 domestic-violence crimes a year. "And I don't necessarily blame them. As an advocate, I can't really promise them it's going to get better. I can probably promise them it will get worse."

While the court system keeps fines minimal for offenders, victims find themselves having to work multiple jobs to pay their partner's court fines or bail money. "They either stay with the abuser or try to do it on their own," Hill says. "Ideally, we want them to become self-sustaining, but starting-level jobs pay so little. Rent, gas, day care [costs] just shadows that paycheck, and eats it up so quickly."

But for Boardman, the key moment is when law enforcement first encounters a domestic-violence victim such as the 22-year-old. A lethality assessment—a series of weighted questions—can play a key role in helping a victim understand how dangerous her situation is, he says, and perhaps save a life.

In 2005, Maryland instituted a lethality-assessment protocol that's been credited with reducing domestic-violence homicide rates within that state by 40 percent, says Woods Cross Police Chief Greg Butler, whose officers currently are the only ones in Utah trained and certified in the protocol. Thirty states have adopted the model.

Butler says the protocol saved a woman's life shortly after his men were trained. "We need to get it implemented in the state of Utah," he says.

The woman, whom Butler declined to identify, was a recent divorcee who told her LDS bishop she suspected her ex-husband was abusing their children. The bishop contacted Child Protective Services, which contacted the Woods Cross Police Department. Detectives discovered that the woman's ex-husband, a former Marine combat medic, had been stalking her, and had broken into her house, made her bed and left a condom on it. When a detective reviewed the lethality assessment form with her, Butler says, "a light bulb came on" as she realized how much danger she was in, and moved with her children to a friend's house.

Officers subsequently cornered her ex-husband, who had been digging holes in various places, as if "looking for a place to dispose of her body," Butler says. He killed himself with his own handgun.

While West Valley officers have a domestic-violence questionnaire to fill out, WVCPD does not currently utilize the Maryland assessment, though Boardman is hopeful that his department will take it onboard.

In contrast to situations where, Boardman says, a cop's gut says the victim could be killed, the lethality assessment would allow a cop to show a victim she has scored high, and then follow the protocol and call the shelter WVCPD works with—South Valley Sanctuary—so the victim can make contact with a shelter worker.

Still, Hill says, "less than 10 percent of clients we serve want to go to shelter."

And, "that being said, that small handful can't get in," she says.