A media chief rises to a top job for attorney general amid transparency concerns. 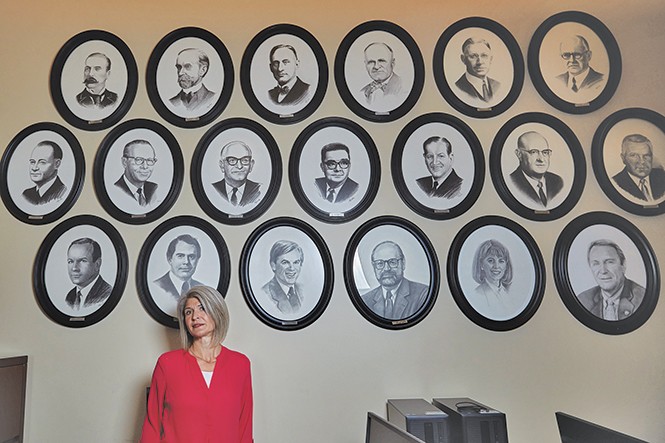 In an April 2016 email to his 500-strong staff, Utah Attorney General Sean Reyes announced he'd made some changes to his executive team. Along with bringing in an Mexican ex-congressman and special forces operative as diversity outreach and "HR investigator," Reyes noted that he had promoted his PR chief Missy Larsen to chief of staff, the second most powerful position in the state's largest law firm.

Larsen's jump from spokesperson to Reyes' first assistant is not unique—for example, former journalist turned Indiana AG spokesperson Staci Schneider was promoted to chief of staff under Indiana Attorney General Greg Zoeller. An appointed position, as opposed to the protected merit positions that most employees at the Utah Office of the Attorney General enjoy, Larsen is a non-attorney who does not oversee attorneys—that's the job of Reyes' civil and criminal deputies.

As chief of staff, Larsen runs the office's administrative staff, the Children's Justice Center and the information technology department. She also handles outreach and advises the AG and his executive staff and division directors "on policy issues that impact the office missions," according to a job description provided to City Weekly by Larsen's replacement, former corporate attorney and political pundit Daniel Burton. Policy includes, she says, being a legislative liaison and developing new programs, such as the SafeUT app, which provides confidential counseling for suicidal students. Ultimately Larsen sits at Reyes' right hand. As his first assistant, she is both confidant and his proxy at meetings he can't take, "getting the messaging back to the AG," she says.

Jon Harper is the Democratic challenger to Reyes for attorney general. Larsen's promotion and the appointment of Burton to replace her, sounded "like quite a luxury to have two PR people when you have other areas in the AG office that may be understaffed." He argues that Reyes, "seems more concerned about controlling information through PR people than having an open and accountable office to the public."

Reyes' administration has troubled some reporters, who have questioned his office's commitment to transparency, particularly when it comes to government records. Brigham Young University associate professor of journalism and board member of Utah's chapter of the Society of Professional Journalists (SPJ) Joel Campbell says reporters have told him "they feel they are often viewed as the enemy," by the current AG administration. He feels that the AG and the media "need time to cool off, and then come back to the table."

In June 2016, the Utah SPJ gave Reyes the Black Hole Award, citing two specific cases where the AG refused to provide records relating to politically sensitive criminal investigations. In its press release, the SPJ concluded that "the opaqueness Attorney General Reyes' office showed in 2015 is not standard and cannot be described as honest."

Larsen describes the award as "weak," and argues that if the SPJ had done its homework, they would have understood why the office had taken the approach it had, namely that open criminal investigations were protected by law.

She finds contemporary reporting troubling, particularly how the financial realities of shrinking advertising revenue and the demands of 24-hour online news cycle, "makes communication more difficult. It's harder to get people to sit down and see the big picture," she says. "They've got to get [a story online] before the competition. I'd prefer people to take the time to learn. Very good reporters who stay informed and get the background done are becoming more seldom."

The Utah AG's office wasn't always this critical of the media. Former Attorney General Mark Shurtleff, who recently saw corruption charges against him dismissed in 3rd District Court, was a vocal supporter of the Fourth Estate. Shurtleff was "a champion of the reporters' privilege law," notes Campbell, although Shurtleff's attempt to pilot a "shield" law through the legislature proved unsuccessful. Shurtleff instituted both the Open Book, a guide to public meetings laws, and an explanatory government records access website, neither of which are available anymore on the AG's website. Larsen says she wasn't aware of either publication.

Larsen says when she started at the AG's office, it "was in a state of extreme low morale. Many employees had been personally contacted by reporters and bloggers, even at their home, and expressed frustration." She says a policy was put in place that directed all media inquiries to her, so she could coordinate them, adding that in many cases "the very attorneys who sent me the media inquiry ended up speaking to the media about the issue."

The new policy was leaked to the media in March 2014 over concerns it constituted a gag order reinforced by the threat of discipline or termination if any employee spoke to reporters about the office, its business, people or cases, without permission from Larsen's office. Larsen stresses that there was no "gag rule" put in place, "as we designate people all the time," to speak to the press. "No one was ever considered for termination for voicing their views to the media."

Beyond the cases cited by the SPJ, society board member Campbell argues that Reyes' administration "has not paid a serious interest to openness." He expresses concern that Shurtleff's commitment to transparency is not evident with Reyes, and notes the "backlash" the group has experienced over the award in terms of both a press release by the AG's office and public statements. He describes the response as reflecting both "an anti-openness" and evidence of "a thin skin. There's been some really defensive posturing in the media going after that award."

Larsen is part of Salt Lake City's political royalty, being the daughter of former Democratic Mayor Ted Wilson and sister of Salt Lake County councilwoman Jenny Wilson. "I grew up in a very active political family," she says.

She learned from her father, "how to build relationships that make change in the world." She and her sister are markedly different in their political philosophies. "Jenny is a hardcore Democrat. I tend to be more on the conservative side."

A communications graduate, in 1994 Larsen set up her own PR firm, Intrepid Agency. In 2002, when Elizabeth Smart was kidnapped, she and her agency worked to keep Smart's image "fresh and in front of the public," she says.

After selling Intrepid to her fellow directors in 2004, Larsen was drawn back into the public arena after efforts to locate a house for sex offenders near her home drew her ire. In 2012, she ran for a county council seat against Sam Granato, but "came up short," she says. During the campaign she met corporate lawyer Sean Reyes, who was then running for AG against John Swallow. What she liked about Reyes, she says, was "he wants to be collaborative."

Ask Larsen if her promotion reflects an interest at the AG in ensuring that policies and internal decisions run in tandem with curating Attorney General Reyes' political image, and she says that such a perspective has never been discussed. "I'm really here because of the great things we're doing as an office," she says. While she acknowledges that Reyes might, at some point, "want to do something different, for now he is a very strong attorney general."

She continues, "I'm not here as a set up in any way, I feel like we're doing extremely great work. If I didn't feel this way, I would find something else to do."