When it comes to grooming, Mit Romney has the upper hand on Huntsman. 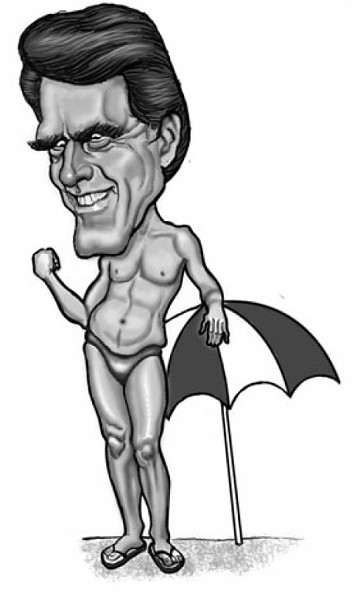 I don’t think I’ve ever seen my former missionary companion so down in the dumps. Mit had called me earlier in the evening from his Park City hideaway, and I could tell immediately from his tone of voice that he required more than a breezy phone chat to cheer him up.

So, here I was, pouring four fingers of Jack Daniel’s into a highball glass (I gave up drinking years ago, but Mit [Editor’s note: Mr. Romney has dropped the second “T” from his first name in an effort to demonstrate his sincerity with regard to downsizing his opulent lifestyle] still hits the bottle now and then to drown his sorrows. When he drinks on his own—something I continually advise him not to do—he invariably grabs the cheapest rotgut from his liquor cabinet, but I always pick the best for my friend, and Jack is certainly preferable to his usual Early Times.)

I handed Mit his highball, and he nearly drained it in one swig.

“This stuff about Huntsman Junior is driving me out of my freaking mind,” Mit said, the Newsweek puff piece spread out on the ottoman in front of his La-Z-Boy recliner. “Everybody loves that guy. They make him out to be Jesus Freaking Christ practically! I bust my hump campaigning for president in every two-bit one-horse town in the Iowa boondocks, or whatever—you name it: New Hampshire, Pennsylvania, North Dakota, for Chrissakes—shaking the dirty sweaty hand of some hick fresh from slopping the hogs, and still I don’t get no respect!”

Mit swirled the deep-amber liquid around the rattling ice and took another healthy swallow.

“Hit me again, bartoonder,” Mit said, and while I was pouring, he launched into an attack on the media, those cynical slobs who had ignored his recent trip to Afghanistan.

“Even The Salt Lake Tribune buried my news release, which, to give them credit, they published verbatim, at the bottom of A-5. Tell me, Elder Sorenstein [Mit likes to kid me about my great-great-great grandfather, who was a rabbi in Copenhagen, and for whom Elder Romney graciously performed a proxy baptism in the Bern, Switzerland, Temple—those stiff-necked Frenchmen won’t let us build temples on French soil], what the fock [Mit loved the latest Focker movie] do I have to do for everybody to take me halfway seriously?”

For a long time, Mit, as well as many friends and family members, believed fervently that he was divinely ordained to occupy the White House. God knows he had paid his dues: He saved the Olympics, humbled and, in many respects, humiliated himself in the rough and tumble of elective politics and tried to turn himself into the Y chromosome version of Sarah Palin. Despite the Mormon factor, he knew of a surety that God would turn the hearts of the American people toward him and elevate him to the highest office in the land.

Then, as fate, or the will of God, would have it, just when the White House was so close Mit could almost smell the South Lawn, along comes Jon Huntsman Junior, and the fickle hearts of the populace start leaping in his well-groomed direction. Mit knows in his heart he cannot match Huntsman Junior’s patrician ease and aristocratic savoir faire. So he’s going nuts with envy and resentment.

“I’ve got an idea,” I say, knowing in my heart of hearts that my former missionary companion’s situation is hopeless. But I still must strive to give him hope.

“One place you can really best Huntsman Junior is in the grooming department. I know for a fact that Junior is not nearly as well-groomed as he appears. People tell me that he doesn’t always clip his toenails, and he is sometimes careless in the disposal of used Q-tips. I am willing to swear on The Book of Mormon that you are the most well-groomed man since human beings began bathing regularly.”

“You would do that for me?”

“In a heartbeat. Let’s issue a grooming challenge to Huntsman Junior. We’ll call it the Great Groom-Off. Head to toe, he can’t compete.”

“I always knew my regular flossing would pay off,” Mit said, flashing his pearly whites, enhanced as they nevertheless are by the latest dental-veneer technology. “And I’ll have the last laugh on those hoons who make fun of me for waxing my pectorals.”

For the time being, Mit was at peace. He thanked me again and then excused himself to go look for his grooming scissors.