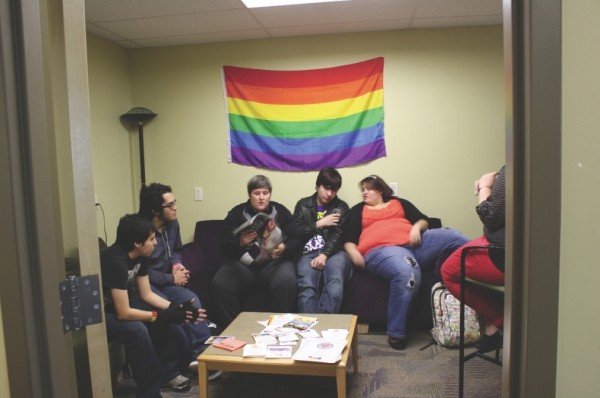 After years of advocating and letter-writing, LGBT Weber State students will be getting their own resource center.

The movement for a safe space on campus where LGBT students can find resources or just hang out started in 2010, when a student group called the LGBT Initiative sent out an assessment survey to see what students thought about the WSU environment.

The assessment—which went through 30 drafts before being approved by the WSU Student Senate to be sent to students—found that many LGBT students didn’t feel comfortable and thought there weren’t enough resources on campus.

Students began rallying for a space, sending personal, handwritten letters to administration about coming out and how an LGBT space would have helped them do so.

“I learned very quickly that every time we took a step forward, there was two steps back that we had to take to be able to get people on board,” says Harrison Spendlove, a student who has been advocating for the center for the past three years.

Spendlove said that even when they first wanted to give out the assessments, he got the feeling from faculty and staff that they were hesitant to do anything because of a fear of losing funding. He said that’s why the assessment went through 30 drafts, being revised by multiple departments on campus.

Adrienne Andrews, special assistant to the president for diversity, says that while the group wasn’t rejected, “I would say [we received] a lot of questions,” she says. “‘Are we sure we need this?’ ‘Are we sure there isn’t something that doesn’t exist that already addresses these issues?’ And those are the relevant questions you would ask at the creation of anything.”

Earlier this year, students signed letters again, this time to send to the school’s board of trustees.

“I wrote that the LGBT center would be awesome,” WSU freshman Tam Sisler says. “It’s important for the college experience; we need resources. And I have a little sister who’s going to be here next year and she’s gay. She is not as independent and hard-headed as I am. She and other people and myself could use the support.”

In May, a committee made up of WSU faculty, staff and community partners decided to join in advocating for the center. Marian Edmonds-Allen, the executive director of Ogden’s OUTreach Resource Centers, sat on the committee and says her role was to inform the committee of the needs and struggles of the LGBT community. She says the three biggest problems faced by those who are LGBT are bullying, homelessness and suicide.

Beginning with fall semester, LGBT students have been using a room in the Center for Diversity & Unity as a lounge, but the room is small, with minimal seating, so students sometimes need to stand. Andrews says students need more than just a lounge, and for more reasons than simply physical space.

“The lounge doesn’t include a dedicated staff person,” Andrews says. “I think there are always conversations, ‘Well, isn’t a student club enough?’ But student-club leadership changes, and energy and opportunity ebb and flow depending on who is leading it.”

The person who staffs the center will be able to keep up with current literature and what the other institutions are doing, Andrews says.

In September, October and November, the committee went before the WSU Board of Trustees; students also attended the monthly trustee meetings to voice their opinions. Trustees granted approval in November.

Mike Vaughan, the WSU provost, says the reason they’re now approving a center is that the current faculty—including WSU President Chuck Wight, who started in January 2013—is willing to fight for the center.

The money for the center and a dedicated employee to staff it will come from the university, including the Provost’s Office, which has in the past allocated money for LGBT programs. The center’s budget has yet to be finalized, and it’s still being decided what building the center will be housed in.

The center still needs to be approved by the State Board of Regents, which will next meet in January, but neither Andrews nor Barry Gomberg, the executive director of WSU’s Equal Opportunity & Affirmative Action, foresees a problem.

“We don’t anticipate that that’ll generate any concern or negativity from the regents, because many other higher-ed institutions in Utah already have LGBT resource centers, and that’s never been a point of contention,” Gomberg says.

And the LGBT growth on WSU’s campus isn’t stopping with the center. Gomberg says that in February, faculty will be able to have their curriculum assessed to see if LGBT issues are properly addressed.

“Our students here, not just LGBT, but allies as well and everybody, would be better served by a more enlightened and progressive discipline and by student affairs professionals who better understand the needs of LGBT students,” Gomberg says.