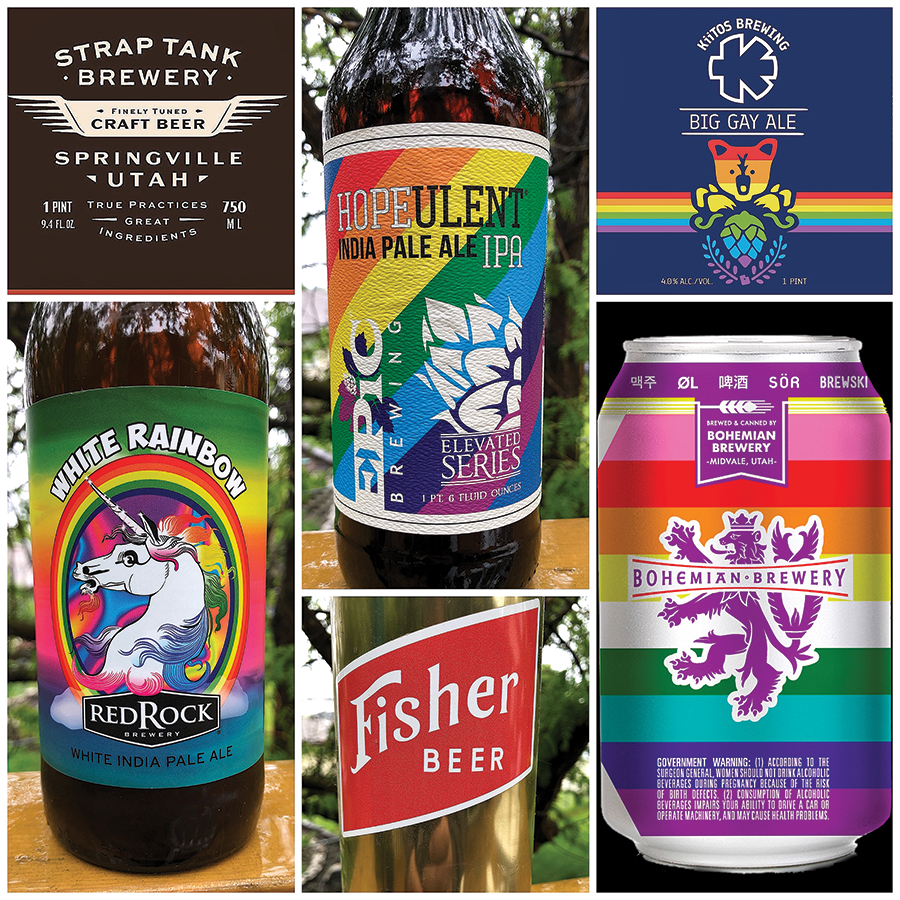 Prideful Pints
A selection of local brews that shine bright with Pride.

New to the Utah Pride Festival fold? Get ready for a Mardi Gras-like affirmation of what makes the state's LGBTQ community special, served up with an explosion of independence, identity and jubilant celebration. In keeping with the theme, many of our local breweries realize the party portion of the weekend requires beverages that reflect the spirit of those who celebrate. Here's a handful of prideful beers to ensure your experience shines a little bit brighter:

Red Rock Brewing Co.'s White Rainbow
This White IPA has a medium, creamy and cream-colored head that sits atop a hazy, yellow-orange body. The aroma is of orange peel, some barley malt and a bit of hop sting. Tastewise, expect dank citrus, slightly turned fruit, mustiness, malt and bread, accompanied by a subdued hop bitterness. The mouthfeel is medium, and finishes semi-dry and ragged. As a bonus for those who enjoy it, 20% of sales go to the local LBGTQ community.

Kiitos Brewing's Big Gay Ale
This beer has a nice fuchsia appearance with an aroma of hibiscus and lemon. The taste is somewhat similar; the hibiscus drives this beer for the most part, with some light citrus-like hops in the end. If you head over to the brewery's pub, you'll also have the added option of getting your Big Gay Ale dosed with edible glitter. That's right: At some point you'll have a disco party during your morning constitutional. A portion of the sales go to Utah Pride and Volunteers of America.

Epic Brewing Co.'s Hopeulent
This beer pours a bright clear gold with a solid head. The aroma is classic through and through, with notes of grapefruit pith, orange peel, pink grapefruit flesh and pine. The flavor is utterly clean and classic, with bold bitterness, grapefruit and orange peel, dry pine, juniper and dry caramel. The mouthfeel is medium to full-bodied with plenty of carbonation and a dry, bitter finish. Overall, it's a spectacular beer. Part of the proceeds from each bottle goes to the Utah Pride Center.

Fisher Brewing/Strap Tank Brewery Collab
Mysteriously unnamed yet, this collaboration created exclusively for Pride involves two beers instead of one. Taking a cue from the Black-and-Tan (the most famous beer blend in the world), the two breweries will serve their beers "stacked." The Strap Tank beer, called "Slay," will be a kettle-soured ale made with edible glitter. It is straw gold in color, and uses mosaic hops and apricots to give it a big stone fruit aroma and flavor. The Fisher part will be a pink-hued beer that will be more hop forward. If all goes according to science, both beers should be layered in a single glass, on top of each other. As of press time, the beers have not yet been completed, so no tasting notes are available. I'm as excited to try it as you are.

Bohemian Brewery/Bar X's Helles
With a clear, light straw-yellow color and a dense, off-white head that falls off rapidly leaving little lacing, this looks solid. The nose has a beautiful, soft breadiness and a touch of grassy, earthy hops. Remarkably clean and focused, the palate opens mildly bitter with grass, earth, a little mint and a wonderful bready, grainy, mildly straw-like character. Light in body and crisply carbonated, this beer finishes clean and mildly bitter. A portion of the sales is destined to benefit the Utah Film Center's Damn These Heels LGBTQ Film Festival, happening July 12-14.

As with the much-talked-about Five Husbands vodka over in spirits land, most of these beers are in a limited run, and were produced exclusively for Pride. Your best bet for acquiring them are at their above-mentioned sources. As always, cheers!